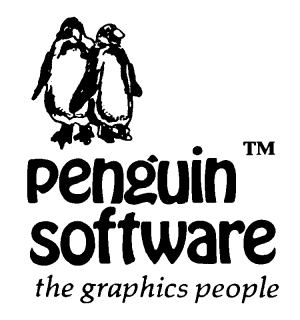 Penguin Software was a video game publisher from Geneva, Illinois that produced graphics software and games for the Apple II, Macintosh, IBM, Commodore 64, Amiga, Atari 8-bit, and Atari ST computers. They are mostly known for their graphics programs Graphics Magician and Complete Graphics System, graphic adventure games such as the Transylvania series, arcade-style games like Spy's Demise, and role-playing video games such as Xyphus.

One of the other widely-touted aspects of Penguin Software's titles was that they deliberately stopped using copy protection, thus making it easier to back up their programs. Pelczarski took out advertisements in many computer magazines to describe his position, and asked that users of their software not abuse their trust.

Penguin Software was confronted by Penguin Books in regard of infringement of their name. Fearing that the legal costs of a lawsuit could have decimated his company, even in the case of an eventual victory, Pelczarski renamed his company Polarware in 1986, ending the "Penguin Software" brand.

In 1987 Polarware was purchased by four employees, Jeffrey (JJ) Jay, Steve Greene, Peg Smith, and Trish Glenn. This new team produced the award-winning children's software series written by Brian A. Rice, The Electric Crayon, a simple electronic coloring book. In 1988, Polarware was acquired by another company and then disbanded later in the year.
ACTIVITY