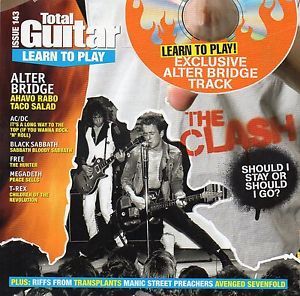 Total Guitar is a monthly magazine based in the United Kingdom. The magazine is owned by Future plc, who publish many other magazines ranging from drums and video games to technology magazines.
More...

DESCRIPTION
Total Guitar is a monthly magazine based in the United Kingdom. The magazine is owned by Future plc, who publish many other magazines ranging from drums and video games to technology magazines.
Total Guitar regularly contains tablature for rock, acoustic, punk, Blues, and Metal, as well as detailed profiles of guitarists and their specific techniques and playing styles. Total Guitar is aimed at players who would like to learn how to play guitar, with dedicated beginner tutorials in acoustic and electric guitar, as well as helping those who can already play guitar to develop their playing style and learn new techniques and songs.
Total Guitar is mainly focused on tuition, but also has an expert gear reviews section that looks at the latest guitar equipment including guitars, amplifiers, pedals and accessories. Total Guitar also secures many exclusive interviews with guitarists from all kinds of genres and levels of playing, and has an in-depth features section.
The Learn To Play section of Total Guitar covers songs from beginner level through to intermediate. The magazine also comes with a free CD in each issue that contains backing tracks and demonstration tracks to accompany the magazine's tablature and regularly features Video Lessons and Guest Lessons with a variety of guitarists. The magazine has also featured a DVD edition in two of the issues. Total Guitar has the largest amount of tablature in each issue of any other UK and European based guitar mag.
2010's line-up of Guest Lesson columnists so far for Total Guitar include Australian fingerstyle player Tommy Emmanuel, blues player Joe Bonamassa and metal guitarist Zakk Wylde. There have been guest spots from various other popular guitarists in Total Guitar over the years, such as Brian Setzer, Joe Trohman of Fall Out Boy, Mick Thompson and Jim Root of Slipknot, John 5, Synyster Gates and Zacky Vengeance of Avenged Sevenfold, Alex Skolnick, Mark Tremonti, of Alter Bridge, Marty Friedman, Joe Satriani, Wes Borland, Matt Tuck and Michael Paget of BFMV, and Matt Heafy and Corey Beaulieu of Trivium.
The magazine celebrated its 200th issue in April 2010, with Jimi Hendrix on the cover.
Total Guitar has launched its new-look website, featuring practical features, reviews, tips, song index for tabs in back issues and guitar news stories and interviews www.totalguitar.co.uk