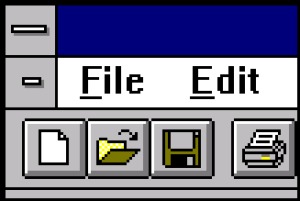 Windows 3.1x (codenamed Janus) is a series of 16-bit operating systems produced by Microsoft for use on personal computers. The series began with Windows 3.1, which was first sold during April 1992 as a successor to Windows 3.0. Subsequent versions were released between 1992 and 1994 until the series was superseded by Windows 95. During its lifespan, Windows 3.1 introduced several enhancements to the still MS-DOS-based platform, including improved system stability, expanded support for multimedi...

"Microsoft Windows Icon Library" v1.5, a collection of about 300 icons for Windows 3.x, packed as a self-viewer executable. It doesn't seem to work when setting icons for shortcuts on modern Windowses, but icons can be extracted with exe editors.
Topics: Windows 3.1, icons

Card video game "Elimination Whist" for Windows 3.1. A variant of Whist, played against one or three computer players, talking with different voices. NOTE: it may not work when downloaded and run offline; it requires a specific version of file THREED.VBX (in game or system folder), which I wasn't able to find and is not included in the zip. Versions with size 64432 or 64544 bytes don't work. The game was completely missing from the Web. If you find the right threed.vbx please comment.
Topics: video game, Windows 3.1, card game

Dexter Dodge Ball is an old game from cartoonnetwork.com where you play as Dee Dee to dress Dexter up like a doll. Since this game is 16-bit and Microsoft was too lazy to allow non real-mode 16-bit applications to work on 64-bit Windows it is not compatible with any 64-bit version of Windows.   A workaround using software called  WineVDM (OTVDM)  can be used to run this game on 64-bit versions of Windows. Also the game must be ran as administrator for 32-bit versions of Windows Vista and...
Topics: Cartoon Network, Windows, PC Game, Dexter's Laboratory, Dee Dee, Dexter, Dress Up, Doll, Cartoon...

From rags to riches by sorting dishes into a cup board.
Topics: game, windows 3.1, reaction

(Taken from the Sailor Moon Wiki) "Sailor Moon and Her Sailor Scouts Computer Fun Set is a video game released for Windows 3.1 and Macintosh by the Gryphon Software Corporation in 1996. The game was based on the Colorforms toy set. Sailor Moon characters and images could be put on one of twelve backgrounds from the anime (redrawn in 256 colours) and printed or saved to a disk. When a character was added to a background a sound clip from DiC's English dub would be played." This is the...
Topics: Sailor Moon, Windows 3.1

Educational CD-ROM for Windows 3.1/95 and Macintosh. This version might not handle saved games properly. It is running off of the CD rather than a proper installation Developed by ImageBuilder Software, Inc., Pacific Interactive, Inc. Released 1996 Also For Macintosh, Windows Published by Pacific Interactive, Inc. Educational Science Perspective 1st-person Genre Adventure, Educational Misc Licensed Description A deadly meteoroid named Impending Dume is about to destroy Earth, And it is up to...
Topics: Windows 3.1 CD-ROM, Windows 95 CD-ROM, Macintosh CD-ROM

Months prior to the release of Windows 95, PC magazines provided a promotional floppy disk from Microsoft containing an interactive guide showcasing the new features of the operating system. Within the presentation, there was also the ability to check the hardware and software installed for compatibility.
favoritefavoritefavoritefavoritefavorite ( 3 reviews )
Topics: Windows 3.1 software, Windows 95

The Windows 3.x Showcase
Tamagotchi
by SGA [of TH]
software

1. What is Tamagotchi?    Tamagotchi is a popular game which originated in Japan.  Tamagotchi (meaning "Love Egg") is a virtual pet.  The original Tamagotchi (©1996 by Bandai) was to be carried with the player (it was a key chain).  Your job was to care for the virtual pet, and in about 30 days it would grow up and fly away.    The following is an excerpt from Bandai's Original, Tamagotchi Info slip:     "Tamagotchi is a tiny pet from cyberspace who needs your love to...
Topics: Windows 3.1 software, Tamagotchi, virtual pet, desktop toys

This is an adventure game (no RPG Elements) released as donationware. The creator made the beautiful backgrounds with MS Paint. It's relatively short, it can be completed in 30 minutes for an average playthrough. The graphics in this shareware are amazing and you can see the good use of the spray tool and the cheery/fitting music works quite well. Beware a possible "game over" IF you don't get the talisman before getting Maredusa to come with you to her admirer. Programmed by Jamie C....
Topics: Llhore, Windows 3.1

Moraff's Eye Saver, Version 1.0!  Shareware version This great Windows game/utility will put an end to eye strain!   Every 6 seconds a pair of animated eyes will remind you to blink. Lack of blinking can cause drying of the eye surface, which can cause permanent damage to your precious eyes!  Also look for Moraff's WorldNet!  Requires Windows 3.1, any screen.
Topics: screen saver, windows 3.1, eye saver, utility

DESCRIPTION
Windows 3.1x (codenamed Janus) is a series of 16-bit operating systems produced by Microsoft for use on personal computers. The series began with Windows 3.1, which was first sold during April 1992 as a successor to Windows 3.0. Subsequent versions were released between 1992 and 1994 until the series was superseded by Windows 95. During its lifespan, Windows 3.1 introduced several enhancements to the still MS-DOS-based platform, including improved system stability, expanded support for multimedia, TrueType fonts, and workgroup networking.

Windows 3.1 was originally released on April 6, 1992; official support for Windows 3.1 ended on December 31, 2001, and OEM licensing for Windows for Workgroups 3.11 on embedded systems continued to be available until November 1, 2008.
ACTIVITY