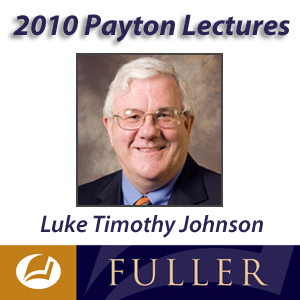 Spirit and Body: The Corinthians and the New Creation

Spirit and Body: The Corinthians and the New Creation
The Body in Question
- by Dr. Luke Timothy Johnson
audio

“Spirit and Body: The Corinthians and the New Creation”

Luke Timothy Johnson, the Robert W. Woodruff Professor of New Testament and Christian Origins at the Candler School of Theology, Emory University, was the featured speaker for the School of Theology’s annual Payton Lectures on May 5 and 6, addressing the topic “Spirit and Body: The Corinthians and the New Creation.” A large crowd filled Travis Auditorium for his two talks, beginning with Wednesday’s lecture entitled “Life-Giving Spirit: The Ontological Implications of Resurrection.”

Using 1 Corinthians 15 as his main text, Dr. Johnson observed that, while the Resurrection confession of Jesus as Lord is the starting point for our faith, “it is both amazing and confusing.” He remarked, “Christians flounder in their grasp of the central truth of their existence.”

Our lack of appropriate language to describe the Resurrection and its implications is part of the problem. Johnson notes that in Paul’s argument the language shifts from historical and experiential to mythological and “unavoidably ontological,” showing that the implications of the Resurrection go beyond a moral, exterior cleansing to a transformation of the believer’s very being. “The Resurrection doesn’t change the furniture of the world,” Johnson stated. “It changes the very structures of existence.” Such dramatic change is necessary because the corruptible and mortal body cannot fully participate in God’s Kingdom.

In his second lecture, “The Body in Question: The Complexities of Somatic Existence,” Johnson discussed the idea of the body in Paul’s first letter to the Corinthians, suggesting that, while we normally think of the body in individual terms, Paul is referring to the communal body of Christ. Christians’ everyday behavior—from marital relationships to meal-sharing—not only affects their individual bodies but the entire community. Further, the mind of Christ that directs the body prevents the believer from acting on a solely individual basis.

Dr. Luke Timothy Johnson taught New Testament at Yale Divinity School and Indiana University before accepting his present position at the Candler School of Theology in 1992. His many publications include The Writings of the New Testament: An Interpretation, Living Jesus: Learning the Heart of the Gospel, and a two-volume commentary on Luke-Acts for the Sacra Pagina series from Liturgical Press.

The Payton Lectures were instituted at Fuller Theological Seminary in 1949 in memory of Dr. and Mrs. John E. Payton, parents of Grace Payton Fuller, the wife of seminary founder Charles E. Fuller. The lectures are sponsored annually by Fuller’s School of Theology.

Archived from iTunes at https://itunes.apple.com/us/podcast/spirit-and-body-the-corinthians-and-the-new-creation/id380159569. Items in this collection are restricted.
ACTIVITY

Title
Spirit and Body: The Corinthians and the New Creation