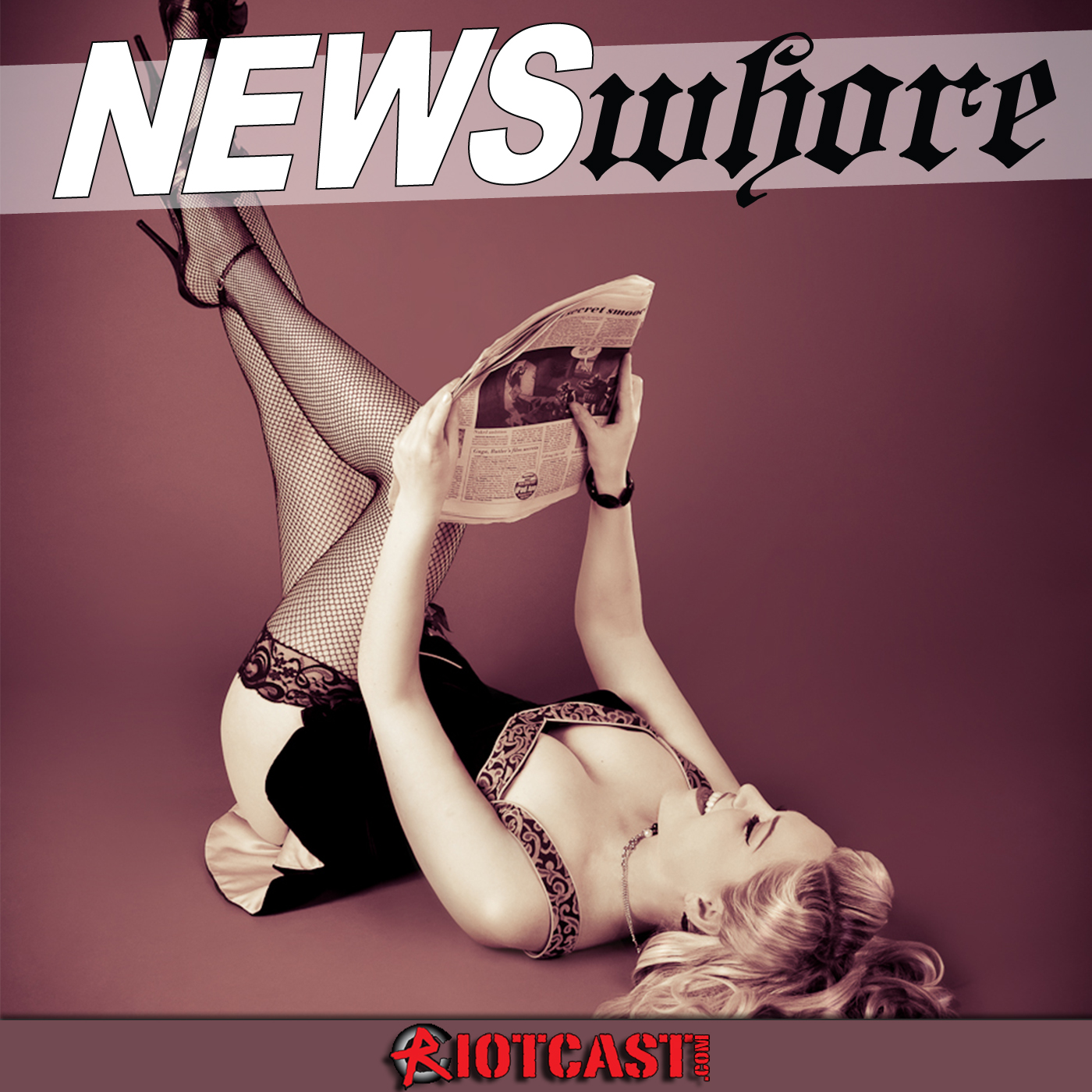 FINALLY! Back from book writing hiatus, Mandy Stadtmiller and Pat Dixon discuss the best show of the year -- with clips! -- HBO's Succession. And get awkward. As always.

It's been far too long! Graham Smith and I caught up a few months back, but as I say in the podcast, I quit Zoloft, so I was way too f*****g depressed to do anything about uploading it. Hooray for self-care and getting back on track, so these long-lost gems are now seeing the light of day again. We talk drugs!

Mandy Stadtmiller and Pat Dixon regroup after the 2016 election to find out if Trump is still tearing their marriage apart. riotcast.com/newswhore

Want a perspective on life that shifts you out of your own? Hear the life story of Jerry Stadtmiller, the father of "News Whore" Mandy Stadtmiller and one of the most fascinating, raw, inspiring, revealing individuals you will ever meet in your lifetime. In this rare once-in-a-lifetime interviews where daughter confronts father and likewise, Jerry and Mandy look at the intricacies and delicacies of a relationship that has not always been easy but has always been rooted in an...

Do men chase women -- OR do women want to be chased so men pretend to like it? Mandy Stadtmiller and her beleaguered husband Pat Dixon discuss her latest Unwifeable columns from The Cut and bicker like delightful little sparrows on Game of Thrones. (Yes, Mandy is watching GoT as she writes this dumb description.)

News Whore with Mandy Stadtmiller
No Flowers For The Wicked
Feb 26, 2016 by RiotCast.com
audio

What'd you get for Valentine's Day? Mandy Stadtmiller and Pat Dixon got a big old fight--and a great new Unwifeable column about why she wanted roses so goddamned bad, to tell other women about how she had gotten stupid roses. Does she end up getting flowers? Do they end up in the trash? All these questions and more will be answered in this very special episode of News Whore. Real insights, real breakthroughs, real fighting!

Does personal memoir pretty much guarantee the doom of a relationship? What about when you're married? What does it feel like to be on the other end of a relationship column as a guy? "News Whore" host Mandy Stadtmiller reveals the inner workings behind her new column for New York Magazine called "Unwifeable" and husband Pat Dixon talks objections, corrections and realities.

News Whore with Mandy Stadtmiller
The One Enemy Feminists and MRAs Can Agree Upon
Feb 1, 2016 by RiotCast.com
audio

What's more salacious than a fallen pickup artist? A fallen pickup artist named Jared Rutledge with an online trail calling women "f**k puppets" and "plates." Mandy Stadtmiller and Pat Dixon debate the ethics of outing a man who secretly wrote about women he was dating without any names and then saw his anonymous online persona exposed and his personal life roundly demonized and condemned by both feminists and members of the Red Pill community.

Pushcart Prize-winning author Jerry Stahl is a legend: of comedy, of writing and of sobriety. He’s written many amazing books, most recently “OG Dad” and is perhaps best known for penning “Permanent Midnight” (made into a movie with Ben Stiller and Owen Wilson). Also, he’s a writer for “Maron” on IFC and used to do heroin while writing “Alf” back in the day so dude knows his s**t. RiotCast.com

One of HuffPo's favorite funny females, Leah Bonnema can be seen on VH1, AXS and IFC and heard on Riotcast's "The Hole" with the inimitable Rob Sprance. She's deep too. And from Maine! RiotCast.com

Jon Ronson is at the top of his game right now as the author of "So You've Been Publicly Shamed" and the genius behind "The Psychopath Test" and "The Men Who Stare at Goats." Revealing never-before-told secrets behind the book that is changing the face of social media, Ronson confesses what drives his unparalleled journalism and uncovering of difficult truths about the state of modern society. RiotCast.com

A special treat -- investigative journalist Michael Moynihan talks truth and trembling and Jon Ronson joins him for the second half. RiotCast.com

Newsweek's Polly Mosendz chats with Mandy and Graham about dolphins and violence. RiotCast.com

Teacher and post-Po$t celebrity talks with Mandy about the reality and nature of the game. RiotCast.com

Comedian, radio host, and father Pete Dominick gets real about the staggering amount of research he's done on everything. RiotCast.com

CoCo Brown, soon to be the first former adult video star in space, tells us how she got to where she's going, in exquisite detail. RiotCast.com

Comedian Nick Vatterott both cracks and fires Graham and Mandy up. RiotCast.com

Mandy chats with the superfit author and journalist Jo Piazza about fame, fun, and being chill in whirlwinds. RiotCast.com

Awesome comedian Dan Soder submits to having his "deal" analyzed by Mandy and Graham. RiotCast.com

Media mastermind Rob Shruter talks about his past and present including glitz and gossip and all good things. RiotCast.com

2 years of News Whore! The great Bonnie McFarlane returns and gets fonky with Mandy and Graham. RiotCast.com

Delaney Williams of "The Wire" and "Law & Order: SVU" walks us through his storied career and regales us with story tales. RiotCast.com

Tony Ortega, author and Scientology investigator extraordinaire, tells us what's up and what's down. RiotCast.com

Actor/writer/director Eric Schaeffer joins us to chat about how to make it as an independent filmmaker. Live your dreams. RiotCast.com

Von Decarlo talks about her new book "I'm Obsessed With" and the late love of her life, Patrice O'Neal. RiotCast.com

Amber Nelson talks about Marilyn Monroe, oversexualization, and the difference (there's only one) between the Middle East and the deep south. RiotCast.com

Sam Morril joins us to talk about bringers, zingers, zwingers, and the chaotic magician who runs Myrtle Beach. RiotCast.com

THNK1994 museum curators Matt and Viviana join us and talk about running an esoteric museum and tiny house dreams. RiotCast.com

We welcome back comedian/crime reporter Pat Dixon, and it goes off the rails in a wonderful way. Graham comes across as even cooler than usual. RiotCast.com

Lloyd Grove of The Daily Beast brings his measured demeanor and his A game to the News Whore studio for some decidedly ungossipy gossip talk. RiotCast.com

Funnyman and crackling ball of energy Geno Bisconte discusses the secret behind the secret. RiotCast.com

Tanner Stransky joins us to chat about EW, HBO, and gay sex. Just tellin' it like it is. RiotCast.com

SUPERSTAR Jodi Lennon talks about her illustrious career and turns the tables on Mandy, interviewee-wise. RiotCast.com

The hilarious Pat Dixon joins us to talk crime, women, and, uh, the intersection of the two. But not in a creepy way. RiotCast.com

Comedian and bundle of energy Michelle Buteau joins us and it gets dark. But not like THAT. RiotCast.com

Jackie Kashian, stand-up comedian and host of "The Dork Forest" chats about family, dorkiness, and all kinds of wild stuff. Rich Vos butts in at the end too, for old time's sake. RiotCast.com

Superstar feminist icon and rad chick Rachel Sklar talks about challenges and opportunities for women in the industries that rule our lives. Also, being pregnant and single. RiotCast.com

Rich Vos of the wonderful "My Wife Hates Me" podcast talks about growing up in Jersey, "the road," and sobriety, and then suddenly removes his shirt, Rick Ross-style. RiotCast.com

In light of Taylor Negron's passing this week, we revisit his hilarious interview with us from way back in the early days of News Whore. RiotCast.com

Kristin Davis comes to the studio en route to her "going away" party before she remands herself into custody to chat with Mandy and Graham about pimps, madams, the law, and her and Remy Ma's lasting friendship. RiotCast.com

Ben Joseph chats with Mandy about sailing, animation, and asbestos while forging a deep non-romantic bond with Graham. RiotCast.com

The writer/director/star and other star of "Muffin Top: A Love Story" chat with Graham and Mandy about 9/11 and Broadway in this two-for-one extravaganza!!! RiotCast.com

Amanda Seales fka Amanda Diva attacks the mic to discuss comedy, music, and just what exactly a chickenhead is. RiotCast.com

Olivia Hall, xoJane O.G. and super-tiiiiight public figure, joins Mandy and Graham for a furtive drilling about Cat Marnell and what she's looking for in a man. RiotCast.com

Mandy and Graham chat with Noam Dworman, owner/proprietor of the legendary Comedy Cellar and the Village Underground. RiotCast.com

For Mandy's birthday, we chat about vaginas and eat pizza with Emily McCombs of xoJane. RiotCast.com

Caissie St. Onge, comedy writer and co-EP of Watch What Happens LIVE!!!! on Bravo chats with Mandy and Graham about how to make it in this crazy world. RiotCast.com

Comedieuse and writrordinaire Julie Klausner spars with Graham and Mandy about books and jokes and I'm tired OK. RiotCast.com

Mandy and Graham chat with Pia Glenn, star of stage and screen about all things cultural. RiotCast.com

Colin Quinn returns to talk about everything under the sun with Mandy and Graham. Hard to believe it's been over a year and the sun illuminates mostly the same stuff. RiotCast.com

Mandy and Graham chat with Rory Albanese of The Daily Show and new show The Approval Matrix about jail, humblebrags, and Studio 60. RiotCast.com

Along with her co-host Graham Smith, Mandy brings the same funny , brutally honest approach to the podcast realm that she does as deputy editor of XOJane.com, as well as The Village Voice, The New York Post, The Los Angeles Times, The Washington Post, Playgirl and countless others before it.

Subscribe to News Whore now for Mandy’s unique perspective on celebrity, life, dating and being single in New York City.

Archived from iTunes at https://itunes.apple.com/us/podcast/news-whore-with-mandy-stadtmiller/id670822456. Items in this collection are restricted.
ACTIVITY

Created on
May 21
2019
arkiver2
Archivist
VIEWS