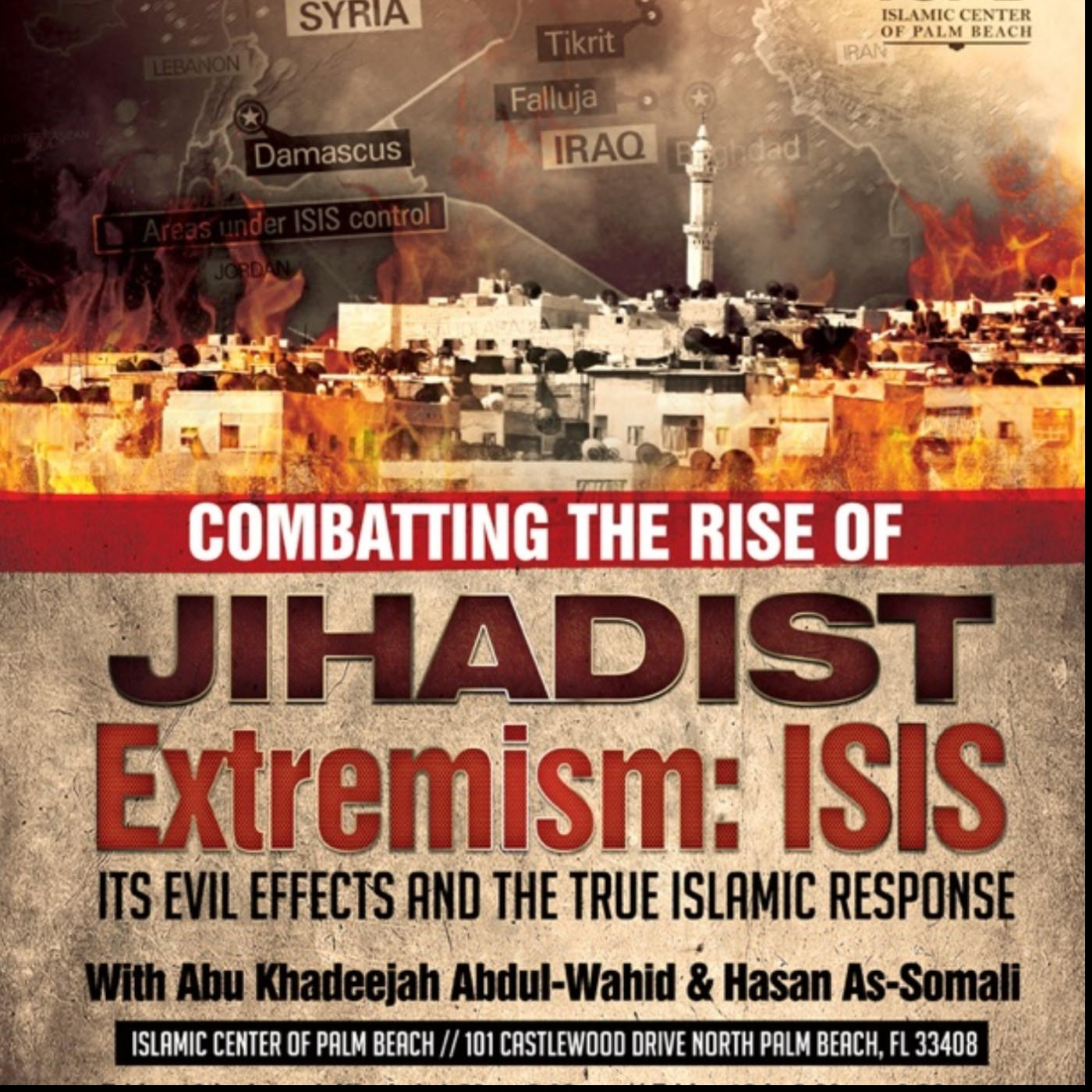 3- Seeking Islamic Knowledge protects against extremism (Abu Muhammad) Lecture highlighting the importance of seeking Islamic knowledge from its proper sources - the Qur'aan, the authentic Sunnah, upon the understanding of the Companions of the Messenger of Allaah, sallallaahu 'alayhi wa sallam - as this beneficial knowledge saves one from being deceived by the false claims of misguided individuals and parties. Recorded March 13th, 2015.

Conclusion of ICPB Seminar: Combatting the Rise of Jihadist Extremism. The highlights of the weekend seminar are summarized, followed by questions and answers from the community. Encouragement for Muslims to spread the truth about this beautiful religion of Islam to Muslims and non-Muslims by way of seeking beneficial knowledge, performing righteous actions, and conveying the Message in the best manner to others.

7- Defining Traits and Figureheads of the Khawaarij (Abu Khadeejah) Lecture on what exactly are the flawed principles and the misguided personalities that the Khawaarij adhere to in opposition to the Sunnah of Allaah's Messenger, sallallaahu 'alayhi wa sallam. Followed by question and answer session.

6- Safety from Trials and Fitan (Abu Muhammad) Our short lives in this world are a test and trial. How does the Believer protect himself when surrounded by trials, tribulations, dissension, division, and fitan? The speaker focuses on the famous hadeeth of 'Irbaad ibn Saariyah, radyallaahu anhu.

8- Prophet Muhammad - A Mercy to Mankind (Abu Iyaad) Abu Iyaad Amjad Rafiq (Salafi Publications UK) Lecture highlighting the mercy, generosity, forbearance, wisdom, and fine character of the Prophet of Islam, Muhammad, sallallaahu 'alayhi wa sallam, as is known from his statements, actions, and dealings with the people. Clear examples from the biography of Prophet Muhammad, sallallaahu alayhi wa sallam, of his noble manners are contrasted with the barbarity and criminality of the Khawaarij...

1- Jumuah Khutbah (Abu Muhammad al-Maghribi) Jumuah khutbah regarding the importance of showing gratitude to Allaah, subhaanahu wa ta alaa, for His guiding us to Islam. We show our gratitude for guidance by learning Islam from its proper sources and acting in accordance with its teachings. Recorded March 13th, 2015.

4- Does Islam condone the actions of ISIS? (Abu Muhammad) Seminar lecture by Abu Muhammad al-Magribi answering the clarifying the true Islamic response to the actions and ideology of ISIS and other extremist groups.

2- Intro - The Rise of Jihadist Extremism (Abu Khadeejah) Introductory lecture detailing the origins of the extremist ideology of ISIS, how they groom innocent youth to their destruction, and how their call to is in stark opposition to the Message of Prophet Muhammad, sallallaahu 'alayhi wa sallam. Recorded March 13th, 2015.

ICPB: Combatting Jihadist Extremism
5- Jihad in the view of the Extremists
Jun 7, 2015 by Islamic Center of Palm Beach
audio

5- Jihad in the view of the Extremists (Abu Khadeejah) Abu Khadeejah presents what is Jihad in Islam according to the orthodox Sunni Islamic scholars throughout Islamic history and contrasts this with the false view of Jihad propagated by Kharajite extremists. The speaker highlights how extremists the likes of ISIS fundamentally violate the preconditions and the clear principles of Jihad found in the Qur'an and Prophetic tradition. Abu Khadeejah then answers questions from both Muslim and...

Archived from iTunes at https://podcasts.apple.com/us/podcast/icpb-combatting-jihadist-extremism/id1003399687. Items in this collection are restricted.
ACTIVITY