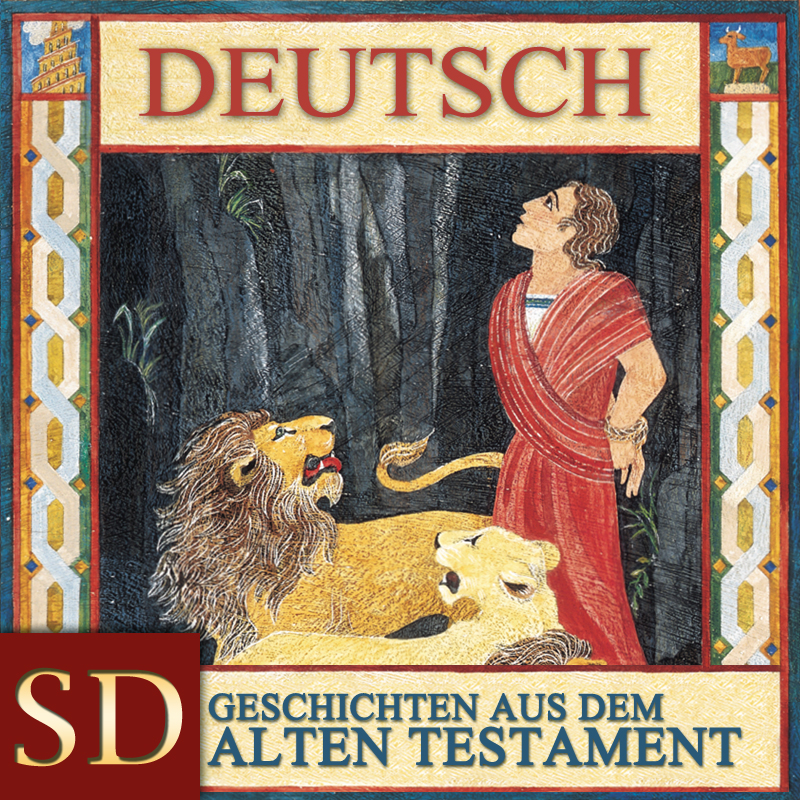 Archived from iTunes at https://podcasts.apple.com/us/podcast/geschichten-aus-dem-alten-testament-sd-german/id545816314. Items in this collection are restricted.

Under the direction of Heavenly Father, Jesus Christ makes the earth.

Adam and Eve live in the Garden of Eden. God tells them that they cannot eat of the tree of good and evil and remain in the garden. Satan tempts them to eat the fruit. God casts them out of the garden.

Adam and Eve have many children. Cain kills Abel, and God punishes him for this sin.

The Lord takes up Enoch and his righteous people. Enoch sees many great things in a vision.

Noah warns the people of their wickedness. He prophesies of a flood. They reject his words. Noah and his family are spared in the ark.

People build the tower of Babel to try to reach God in heaven. God changes their languages. God spares Jared and his family.

Abraham and Sarah are led to the promised land. Abraham pays his tithing to Melchizedek. They are promised a son.

God commands Abraham to sacrifice his son Isaac. Abraham shows his obedience to the Lord, but an angel tells him to stop. The Lord provides a ram for the sacrifice.

Isaac and Rebekah have twin boys, Jacob and Esau. Esau gives his birthright blessing to Jacob in exchange for some pottage.

Jacob finds Rachel and Leah, and they have numerous children in Canaan, the promised land.

Joseph is his father's favorite son. His brothers become very jealous. They sell him as a slave into Egypt.

Joseph is sold as a slave in Egypt. He becomes an adviser to the king because of his righteousness.

Joseph reunites with his father and brothers and provides food and land for them.

The king of Egypt orders all Israelite baby boys to be put to death. The baby Moses is spared by the daughter of the king.

Moses leaves Egypt. He sees the burning bush, and he hears the voice of Jesus Christ. He gives the king in Egypt many warnings to release the Israelites.

The Israelites put lamb's blood over their doors, and their children are spared from a terrible sickness. The Lord helps Moses and the Israelites flee Egypt by parting the Red Sea.

God provides manna and water for the Israelites in the wilderness.

Jesus Christ declares the Ten Commandments to the people on Mount Sinai.

The Israelites worship idols instead of Jesus Christ. Moses receives the Ten Commandments and prophesies that the wicked will be destroyed.

Moses tells the Israelites to build a tabernacle according to Jesus Christ's instructions. Jesus Christ promises to visit the tabernacle.

The Israelites travel for 40 years in the wilderness in search of the promised land.

Joshua becomes the prophet after Moses. Joshua parts the water so the Israelites can travel on dry ground. He leads the Israelites and marches around the walls of Jericho.

Ruth takes care of Naomi, her mother-in-law, after Ruth's husband dies. Ruth is blessed with a righteous husband because of her love for and care of Naomi.

Samuel learns from the priest Eli. Although very young, Samuel is called as a prophet.

Saul becomes the king of Israel. Saul disobeys God by performing sacrifices without the prophet Samuel.

Samuel goes to Bethlehem to find the next king of Israel. God chooses the young David to be the future king.

God blesses David and gives him success in many battles. David becomes king of Israel. He is a good king and obeys God's commandments. He lusts after Bathsheba and sins.

God blesses King Solomon with wisdom. Solomon gives many people wise counsel. He advises two women who are arguing over a baby.

God tells King Solomon to build a temple. It is made out of the best material. The temple is the house of God.

Solomon makes sacrifices to idols, and Israel is punished for wickedness. After Solomon dies, the twelve tribes of Israel are divided.

Elijah hides from wicked King Ahab and Jezebel. He goes to the home of a poor woman and child. The woman prepares bread with their only supplies. The Lord blesses them with food and water during the famine and heals her dead son.

Elijah shows the priests of Baal that idols have no power.

Elijah sees and talks with Jesus Christ. God tells Elijah that Elisha will be the new prophet.

Elijah parts the Jordan River with his coat. Elijah is taken up into heaven. Elisha becomes the new prophet. He parts the river with Elijah's coat, and they recognize him as a prophet.

Elisha performs the miracle of the oil, raises a boy from the dead, and heals Naaman of leprosy.

Jonah refuses to warn the people according to the Lord's directions. He is swallowed by a large fish. He repents and declares repentance unto the people of Nineveh.

Wicked kings rule in Jerusalem. Prophets warn the people, but they do not listen. Babylon conquers them.

Daniel and his friends obey God and request healthy food instead of meat and wine.

Daniel interprets the king's dream. The dream means the gospel will be preached all over the world. Daniel becomes leader over all the land.

Shadrach, Meshach, and Abed-nego refuse to pray to an idol. The king throws them into a hot furnace, and God saves them.

King Darius issues a law to kill all those who pray to God. Daniel continues to pray and is thrown into the lions' den. God saves him from injury.

The Jews return to Jerusalem and rebuild the temple. Some wicked men try to stop them. The prophets Ezra and Nehemiah give them instructions.

Esther, a Jew, is chosen as the new queen. Esther saves her people by revealing wicked Haman's plan.

Job is a very righteous man. God knew that Job would remain righteous even if he was tried in all things. Satan could not destroy Job's faith.

The prophets preach about Jesus Christ. They tell of His birth, life, death, and resurrection.

Many Jews disobey God. Armies from other lands take them captive. Herod becomes the king over the Jews.

DESCRIPTION
Archived from iTunes at https://podcasts.apple.com/us/podcast/geschichten-aus-dem-alten-testament-sd-german/id545816314. Items in this collection are restricted.
ACTIVITY