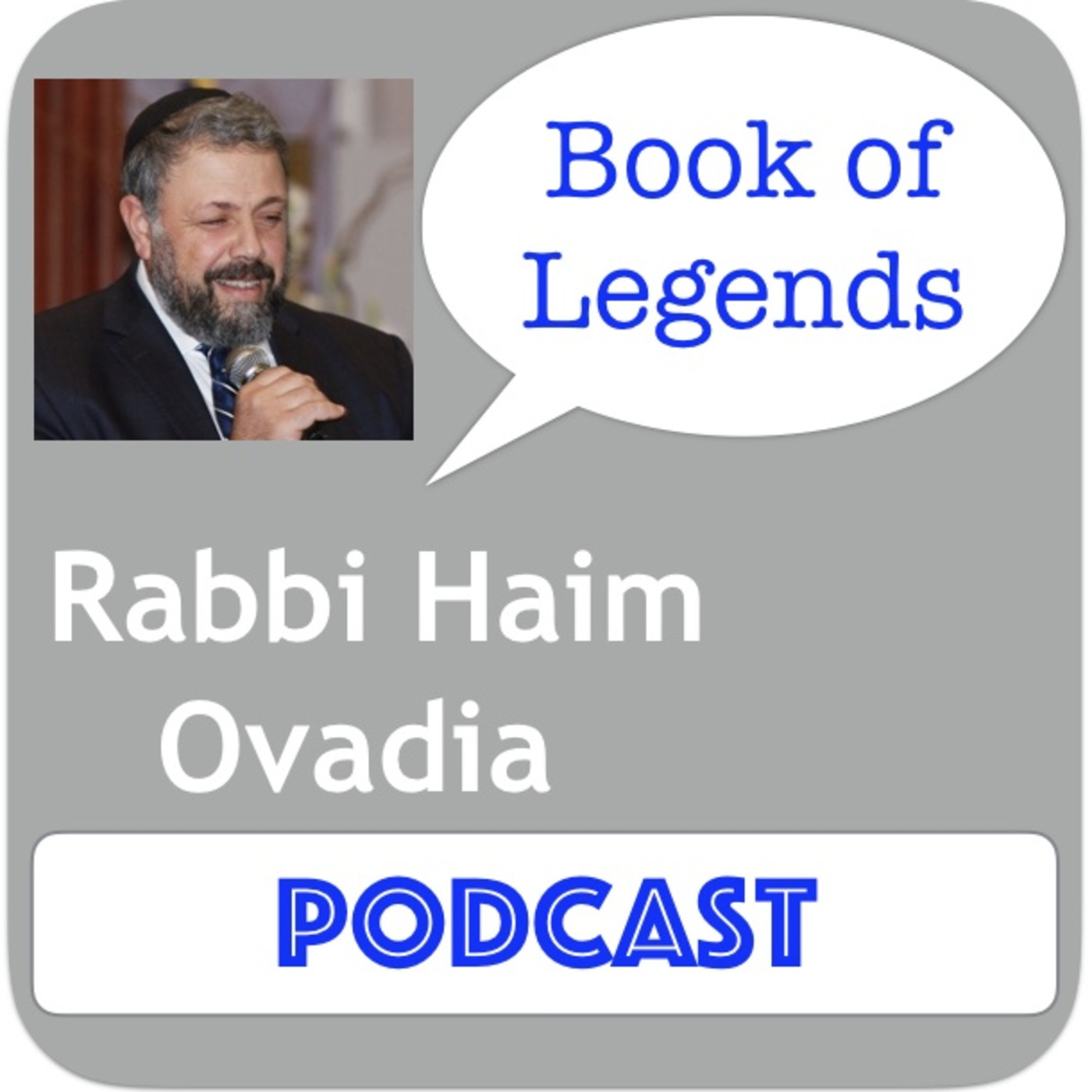 Torah is much more than theoretical studies, and the rabbis emphasized the importance of work, in this succinct statement.

Several Midrashic sources reveal the deep love of the early rabbis to the Hebrew language and their fear of Greek takeover.

A Rabbi insults an ugly man and is taught a lesson in humility.

A man who got upset at his wife fir staying late in a class wanted her to spit at the rabbi's eye. R Meir reaction teaches us deep lessons. We also discuss current problems of domestic violence.

Despite Elisha's claim that he cannot come back, his actions show his deep hope to reconnect.

Book Of Legends (Sefer Ha-Aggadah)
75: Heretic in Chief I - the life of Elisha
May 4, 2017 by Rabbi Haim Ovadia
audio

What was the real cause of Elisha's rebellion?

The famous story about Moshe Rabbenu and R Akiva is revisited as hidden criticism.

After the destruction, rabbis from the Davidic dynasty were the religious leaders. The contention among colleagues and followers led to a democratic, grass roots movement, culminating with the deposition of Rabban Gamliel

Stories about scholars were extremely cautious not to mislead customers, and about a scholar who found ways to give the banished children of a grumpy man, a portion of their inheritance.

Though Hillel and Shammai had major disputes, they've accepted each other's actions. Later generations have mitigated their achievements and promote instead divisiveness.

Akavya ben Mahalalel was a seeker of truth, excommunicated for his stubbornness. His last words to his son are surprising in their honesty and intensity.

Stories of three men rejected by Shammai but accepted by Hillel - is today's orthodoxy Shammai or Hillel?

The Talmudic story about Abba Hilqiyya paints a different picture of a tzaddik. The values of work, honesty, transparency, and business Ethics are conveyed through the narrative.

In the time of the II Temple a partition was adde in the courtyard. Why was it necessary? What was the argument for its creation? A look into a misunderstood mourning practice.

Several paragraphs from Mishna and midrash showing the deterioration in the status of the priests and high priests during second temple period.

The rabbis, and their contemporaries, were awed by Alexander's prowess and feared his influence. We discuss here several paragraphs leveling harsh criticism at him.

Three paragraphs from midrash showing the deep distaste of the rabbis towards the priests and what they represented. Also the idea that sacrifices are a compromise.

The chilling midrashic rendition of Haman's decree, some thoughts on anti-Semitism and on the secret of survival and success of the Jewish people.

In this segment, Abraham, Isaac, Jacob, and Moses ask God to forgive the Jews as a reward for their merits. Each man lists his achievements and sacrifices but God doesn't respond. It is Rachel who wins the argument presenting a feminine and very daring perspective as she challenges God.

Here we see Abraham visiting the ruins of the Temple. He is described as practicing non-Jewish and even pagan mourning practices. We discuss the literal meaning of the prohibition to destroy the beard. Later on Abraham puts God on trial and summons witnesses.

Rabbi Yehuda b. Simon praises Deborah and Esther. R Shimon b. Yohai rejects his disciples' criticism of Persian Jews and explains that sometimes even paganism is superficial.

Two beautiful paragraphs dealing with the reaction to destruction. In one Jeremiah meets the embodiment of Zion and forced himself out of his misery to comfort her. In the other, God mourns his actions and in a dialog with Metatron reveals insights of human psyche.

Here we explore the reason for the thundering silence of the rabbis regarding Hanukkah and Masada.

Two passages are discussed here. One is the corruption of the sons of Shemuel and how the rabbis drew analogy to their contemporary corrupt leaders. The second is the sad story of Saul and his fall from grace, which ends with a surprising twist as in a last act of heroism he redeemed himself.

Why are Hanukkah and Christmas always adjacent? A Midrash found in the Talmud might shed light on the Dec 27 2016question.

The Midrash rebukes the successors of Yehoshua did failing to connect to the people. This message is very applicable today. Other sources speak disparagingly of Deborah, a premonition of the current situation in the orthodox Jewish community.

In this Talmudic passage the 10 commandments Joshua passes on to the Israelites deal with shared resources, civility, border flexibility and human dignity. Not your typical 10 commandments

Book Of Legends (Sefer Ha-Aggadah)
51: Modesty and Hypocrisy: the heretic who would not look at a woman's hair.
Dec 9, 2016 by Rabbi Haim Ovadia
audio

The rabbis criticize the hypocrites who adhere to external factors but lack inner faith and moral values. The Midrash about the wife of Ohn Ben Pelet was distorted by later rabbis to the exact opposite of its original goal.

How the rabbis twisted the story of Korah to attack the corrupt priests.

God laments the completion of the Tabernacle because it was just a distraction, a remedy for the tendency to turn religion into an obsession. Listen to learn more.

The Midrash speaks of the gap felt in Egypt after the Exodus. It resonates with many similar events in later history.

The Midrash says that the Israelites did not change their names, clothes, and language, but it wasn't so throughout history. Are we missing something?

Why was it important for Yosef to be buried in Israel? Why the focus on Moshe's actions? Who is Sarah bat Asher?

The Midrash describes differ leadership styles, the selfish and unselfish. Moshe's encounter with Pharaoh is also described as a theological clash. Illustrated through a brilliant analogy.

A late European Midrash depicts Moshe as a loving leader, who cares about his people's well-being in the desert. God promises survival rather than comfort. Why? Also: God presents Himself by an enigmatic name.

What happened when Moshe first visited the Israelites? Why does the Midrash say he used mystical powers to kill the Egyptian? What energized Moshe?

Why did Moshe flee? What happened by the well? How was Moshe "interviews"?

Why did the Midrash bend the text to suggest a miracle happened when there is a much simpler explanation. Did the author of the Midrash believe that an arm can stretch to twice or three times its length or is there a hidden message here?

Book Of Legends (Sefer Ha-Aggadah)
41: Mole in the Palace: Was Moshe a threat to Pharaoh?
Nov 16, 2016 by Rabbi Haim Ovadia
audio

The Midrash says that Moshe tried on the king's crown. Was it even possible? Was Moshe a stutterer? Why did Pharaoh seek to kill him?

The Midrash describes the methods used by Pharaoh and praises righteous women.

Jacob rebukes his children; he is about to reveal secrets; the origin of Shema and Barukh Shem; Embalming, cremation, removal of bones, and organ donation.

The Midrash turns and twists the dialog between the brothers into a magnificent drama. We also discuss the wisdom of Joseph in delivering subliminal messages and achieving his goals.

How did Joseph know his brothers were in Egypt? What did he base his accusations on? The rabbis made delicatessen from the story of the first encounter between the viceroy and his brothers.

Why weren't the sages able to interpret Pharaoh's dreams. How was Joseph able to convince Pharaoh to appoint him viceroy.

The story of Joseph's temptation was embellished by the rabbis. We also discuss the question whether biblical heroes are flawless.

How the rabbis used Midrash to uplift the spirit of Jews in Diaspora and how the disputed between Yaakov and Esau was never settled.

Yaakov shows preferential treatment to Yosef. He is deceived by his dons in the same method he deceived his father.

Yaakov deceives and is being deceived by Laban who makes all of his townspeople accomplices. Yaakov hurts Rachel, causes divide, and pays dear price.

Was intimacy feared in Talmudic times? How was Yaakov tricked? Rachel and Leah were possibly twins. Yaakov's actions return to haunt him.

Yaakov kisses Rachel. How did the rabbi's view of and what is women's status in Jewish orthodoxy today.

What is the significance of the place? Is quantum leap possible? One or many stones? Dreams and angels.

Why did Yitzhak lose his eyesight? Lesson from a great teacher. And - whose side is God on?

Why did Jacob allow himself to deceive his brother? Did he have a moral struggle? Why did his father give him the blessing even after casting doubt in his identity?

Why didn't Rivka speak to her husband about their sons? Was there a problem with their marriage or something that stemmed from their past and societal norms?

Book Of Legends (Sefer Ha-Aggadah)
24: Jacob Have I Loved - how Esau became a villain
Sep 23, 2016 by Rabbi Haim Ovadia
audio

What is the meaning of the struggling twins? How it reflects the life of the author of the Midrash?

The temple is not the center of jewish life - the home is!

Last session on Akedah in Midradsh. Highlighting the idea of martyrdom as evolved in Ashkenazi Jewry under Christian influence.

Satan tries to stop Abraham. An allegory to Abraham's fears. Influence on Islam.

Exploring the Akedah and martyrdom through biblical and rabbinical texts. Part 1

Written in post Islamic period, this Midrash apologizes for Ishmael's expulsion by Abraham. It puts the blame on Sarah and shows Abraham as a doting father. Mohammed's wives are even mentioned by name.

Book Of Legends (Sefer Ha-Aggadah)
18: A Murderous Pagan at Abraham's Home? Why was Ishmael driven away.
Sep 7, 2016 by Rabbi Haim Ovadia
audio

One rabbi says that Ishmael worshipped idols, while another says he was kicked out bc of inheritance disputes? Who is right?

Book Of Legends (Sefer Ha-Aggadah)
17: Sodom - Not Sodomy but Misanthropy (hatred of others)
Aug 26, 2016 by Rabbi Haim Ovadia
audio

People believe that Sodom's sin was Sodomy, but Ezekiel and the Midrash teach otherwise.

Why did the rabbis cast Abraham in a negative light, as one who refuses to be circumcised?

The Midrash describes Abraham's hospitality, generosity, and religious teachings. It also describe Sarah as being hidden in a box or trunk - is that a metaphor for men locking women away?

In the Midrashic story of Abraham the rabbis deliver complex philosophical and theological ideas through an apparently simple story.

Loosely translated as "legends", Aggadah includes the genres of biblical exegesis, stories about biblical characters, the lives of the Talmudic era sages and their contemporary history, parables, proverbs, and folklore. A captivating melange of wisdom and piety, fantasy and satire, Aggadah is the expressive medium of the Jewish creative genius. - Rabbi Haim Ovadia is the Rabbinic leader of the Magen David Sephardic Congregation in Rockville, MD.

Archived from iTunes at https://itunes.apple.com/us/podcast/book-of-legends-sefer-ha-aggadah/id1178762274. Items in this collection are restricted.
ACTIVITY