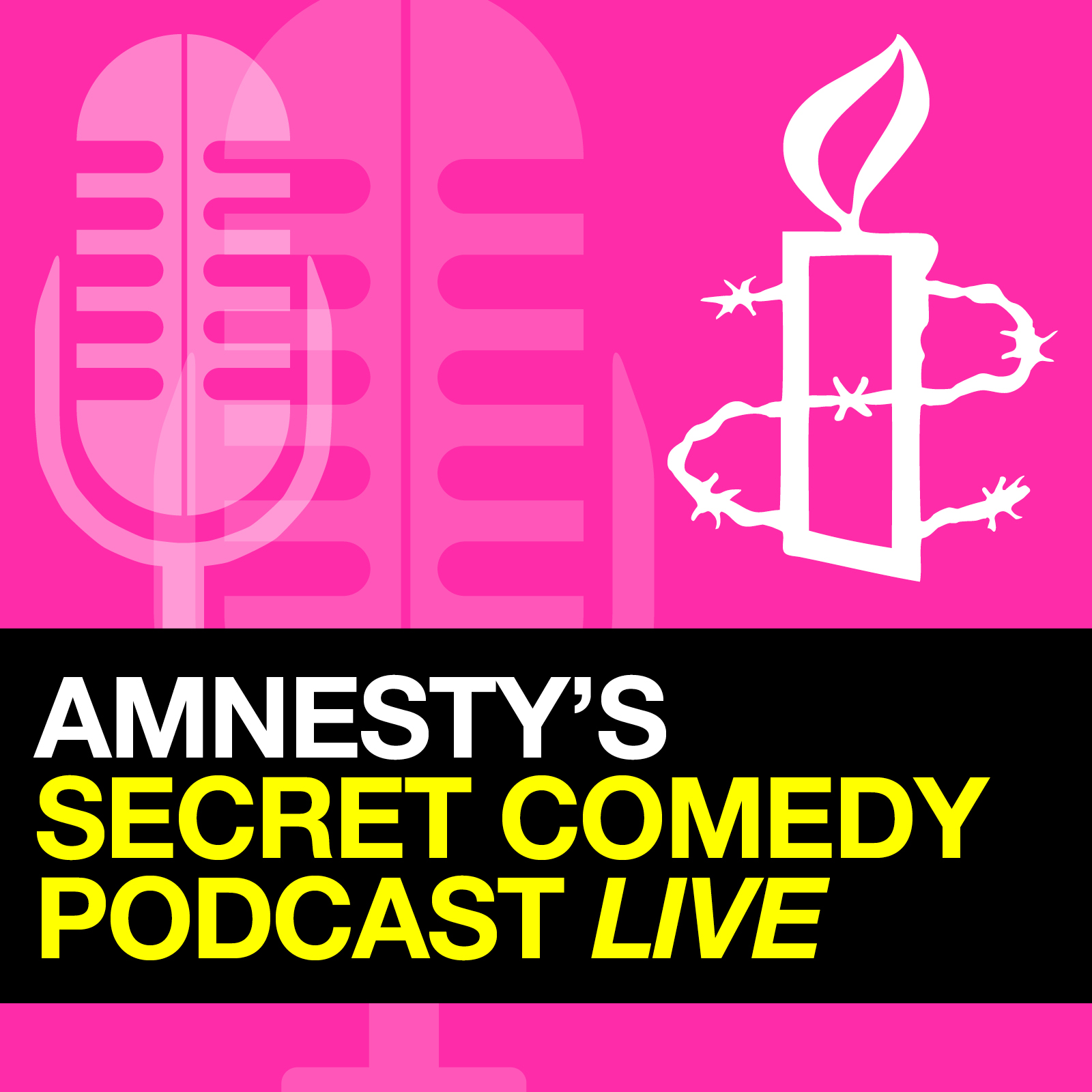 Welcome to Amnesty's Secret Comedy Podcast live from all over the place.

Live from Edinburgh in this episode we have Jimeoin, Daniel Sloss, Rhys Darby, Lucy Porter, Adam Kay and Shappi Khorsandi all kept in order by Susan Calman.

In episode four Susan Calman chats it up with Mark Thomas about his new show and gets Tiffany Stevenson and Mark Little to confess their secrets. Phil Nichols tells us about how Fernando Torres improved his love life, Helen Arney sings about making love, ahh... and Loretta Maine performs a little ditty about little things. We really couldn't squeeze anymore in.

In the second episode of our Secret Comedy Podcast, live from the Underbelly in the heart of the Edinburgh Fringe, host Susan Calman is joined by the weird, wonky and wonderful Paul Foot and Hollywood superstar Michael Winslow. The Blanks (the band from Scrubs) perform and Edinburgh stalwarts Josie Long and Sarah Kendall talk politics and freedom of expression.

In episode three our host Susan Calman brings some of the world's best comedians to a tiny stage in Edinburgh for your listening pleasure. There's QI's Alan Davies, Sarah Pascoe and Michael Mittemeir having a chat. As well as performances from the hilarious David O'Doherty, the rib tickling Jo Caulfield, the smiley Rob Becket and a phenomenal wrap up rap from Abandoman!

Amnesty's Secret Comedy Podcast returns with Breakfast show DJ Christian O'Connell at the helm. Kicking us off is legendary comic Bob Mills on the challenges of height-weight ratios, Kerry Godliman on starring alongside Ricky Gervais in his brand new comedy, dishy Joel Dommett on waking up to find a Boris bike in his bedroom, Canadian one-line merchant Stewart Francis on controversial Christmas plans, and Scots comic Matt Winning on life as Robert Mugabe's secretary. What's not to love?

In episode five the legendary Mike McShane talks about why Amnesty is important to him, Claire Sweeney tells us a secret about Bill Clinton, DeAnne Smith sings us a song about the things we all have in common and there is hilarious stand up from Felicity Ward, Jigsaw and Terry Alderton.

With Susan Calman off fighting the good fight, super sassy Tiffany Stevenson takes the reigns steering us on an unstoppable ride through mashed up pop, stand up and juicy secrets. Frisky and Mannish delivered the music, Jessica Fostekew brought the laughs; and Mark Watson, Janet Ellis and Danielle Ward divulged some incredibly juicy secrets including one corker from Ms Ward involving a certain lothario by the name of Brand.

In our latest jam packed we have stand up from Benny Boot, Dana Alexander and Chris Henry. Mitch Benn sings about gay marriarge. Richard Bacon tells us about the time George W Bush tried to kill him, Suggs lets us in on some back stage Olympics gossip. Jo Caulfield chats about things she's learnt at the Edinburgh Festival and So you think you are funny? competition winner, Aisling Bea, tells us about crying by some bins. And to end it all we have a poem from the amazing Shane Koyczan.

Miles Jupp returns with a stand up comedy from John Moloney and David Morgan, some chat with rogue reporter Rich Peppiatt and Romesh Ranganathan, and a song from the wonderful Vikki Stone. Philip Schofield beware!

Miles Jupp, known for his roles in Rev and The Thick Of It, takes over as host of Amnesty's Secret Santa Comedy Podcast. Phil Nichol tells us about his latest attempt to join a gym, The Boy With Tape On His Face removes the tape and actually speaks! Deborah Frances White tells us a little bit too much about her family situation and Eric Lampaert and Matt Richardson entertain the crowd with some hilarious stand up comedy.

In our second podcast recorded live at the Edinburgh Festival David Baddiel laments his fading fame, Caroline Rhea tells us about her relationship with her fans and we have stand up from James Acaster telling us about his sky writing ambitions and Zoe Lyons lets us in on how to reveal the visible signs of ageing. Plus The Boy With Tape On His Face reveals Ian Rankin's shocking secret about a real life murder he committed.

Amnesty's Secret Comedy Podcast returns with Jeremy Hardy sharing one too many secrets about working with Burt Reynolds and Chris McCausland reveals how he cheated in a school exam. There's a song about the future from self-confessed nerd Helen Arney and Tom Allen gives us a right good giggle with his award-winning stand up comedy.

Ed Byrne hosts the first of our Secret Comedy Podcasts recorded live at the Edinburgh Festival with Jenny Éclair telling us how she got fired from Loose Women, Ben Van de Velde starts a joke chain letter to Putin and Marcus Brigstocke tells us a secret about how he told Elton John not to play the piano in his own house. Plus we've got stand up from the amazing Aisling Bea, a memory palace from the master of the one-liners Gary Delaney and David O'Doherty with an inspiring (and factually...

Christian O'Connell hosts episode four of our podcast live from Edinburgh with Sandi Toksvig on why she won't be competing in the Winter Olympics, John Lloyd on Sandi Tosvig [not literally, Ed.] and Lucy Porter exposes the personal grooming tactics of male celbs. Plus we have stand up from Eric Lampaert on the close nit community of Milton Keynes, Nish Kumar on the essence of Britishness and Abandaman plays us out with a rap inspired by the show.

Our Secret Comedy Podcast is back at this year's Edinburgh Festival and better than ever. As a tiny bite sized taster of what you are in for have a listen to some of the best bits from 2012 along with interviews and stand up from some of this year's guests including: Julian Clary, Al Murray, Lee Mack, Jenny Eclair, Ed Byrne, Jo Caulfield, Alan Davies and more.

Recorded live at the Edinburgh Festival we've got stand up from Janey Godley, Ivo Graham and Neil Delamare plus Greg Proops explains evolution, Fred MacAulay takes pride in Scottish pride and Andrew Maxwell where fans of extreme theatre should be booking their holidays.

In episode five Josh Widdicombe makes a mess, Mark Thomas reveals to Christian O'Connell which political party he'd least like to make a donation to and Jason Byrne tells us about being upstaged by Chris Hoy. Plus we've got brilliant stand up from Muffragette Mary Bourke on the best time of day to log on to MumsNet and Benny Boot on when you are at your most vulnerable to monster attacks and The Noise Next Door play us out with a special song for a member of the audience. Entertaining and...

Our latest host Jo Caulfield introduces stand up from Lloyd Langford reminiscing about a romantic weekend in Paris, Terry Alderton reminds us how ignorance can be bliss especially when it comes to One Direction and Stephen K Amos reveals why comfortable shoes aren't always a fashion statement. Plus sketch comedy from The Ginge, The Geordie and the Geek and Vikki Stone sings us out with a song about preeminent DILF Brian Cox.

Mark Dolan chats to our new host John Moloney about being brought up by drunken strangers and Alfie Moore talks about being a real life secret policeman. Plus stand up from Lee Camp on the rights we have given up in the name of the 'War on Terror', Diane Spencer on being a victim of racism and lyrical shaman Beardyman plays us out.

In the second of our two special shows hosted by Julian Clary, the great Alexei Sayle reminisces about making the oft-overlooked Carry on Coloumbus. Reginald D. Hunter lays bare the importance of an honest sex education and Julian shares his tips for making love to a woman. Plus we have hilarious sketch comedy from Jigsaw and Brian Kennedy plays us out with his classic 'Christopher Street'.

In the first of two special podcasts hosted by Julian Clary, Al Murray tells us what the Pub Landlord thinks of the Euro and Helen Arney sings about the 2001 Foot and Mouth crisis. There is also stand-up from Al Lubel who discovers himself live on stage, Carl Donnelly who reminds us of an important Lesson from the Bible that heterosexual relationship don't always end well and Stephen Carlin explains what it takes to be a top flight alcoholic. Plus Julian sings us out with a very special song...

Veteran broadcaster Johnny Walker chats to our host Mark Dolan about free speech, Tumi Morake talks about the state of freedom of expression in South Africa and Barry from Watford talks about taking things into his own hands. Plus stand up from Ronnie Chieng on some of the lesser known things China has invented and Richard Gadd, who has had a tough two weeks.

Our host and big fan of free content Alan Davies chats to Tim Vine about being middle children and they test their knowledge of Monopoly while Keith Farnan talks about the death penalty and gay rights. Plus we've got stand up from Chris Martin on playing practical jokes on animals, Jess Fosteke on one of the finest of our nation's BandBs and Mike Wozniak tells us some science based cat facts.

Janeane Garafolo tells our host Mark Dolan about seeing the light and Tig Notaro reveals what kept her laughing through cancer. Plus we've got sketch comedy from Foil, Arms and Hogg on the joys of Ryan Air and stand up from Matt Okine on how to make good toast and Shaun Keaveny on being addicted to Breaking Bad, a show about addiction.

In the last of our Secret Comedy Podcasts recorded live at this year's Edinburgh Festival we have extra bits that we just couldn't squeeze into the other shows, including stand up from Tanyalee Davis, Paul Foot and David Morgan. Plus we chat to Lee Mack about his first ride and Tim Fitzhigham tells Mark Dolan about sailing across the English Channel in a bathtub.

DESCRIPTION
Welcome to Amnesty's Secret Comedy Podcast live from all over the place.

Archived from iTunes at https://itunes.apple.com/us/podcast/amnestys-secret-comedy-podcast/id550151597. Items in this collection are restricted.
ACTIVITY

Created on
May 5
2019
arkiver2
Archivist
VIEWS