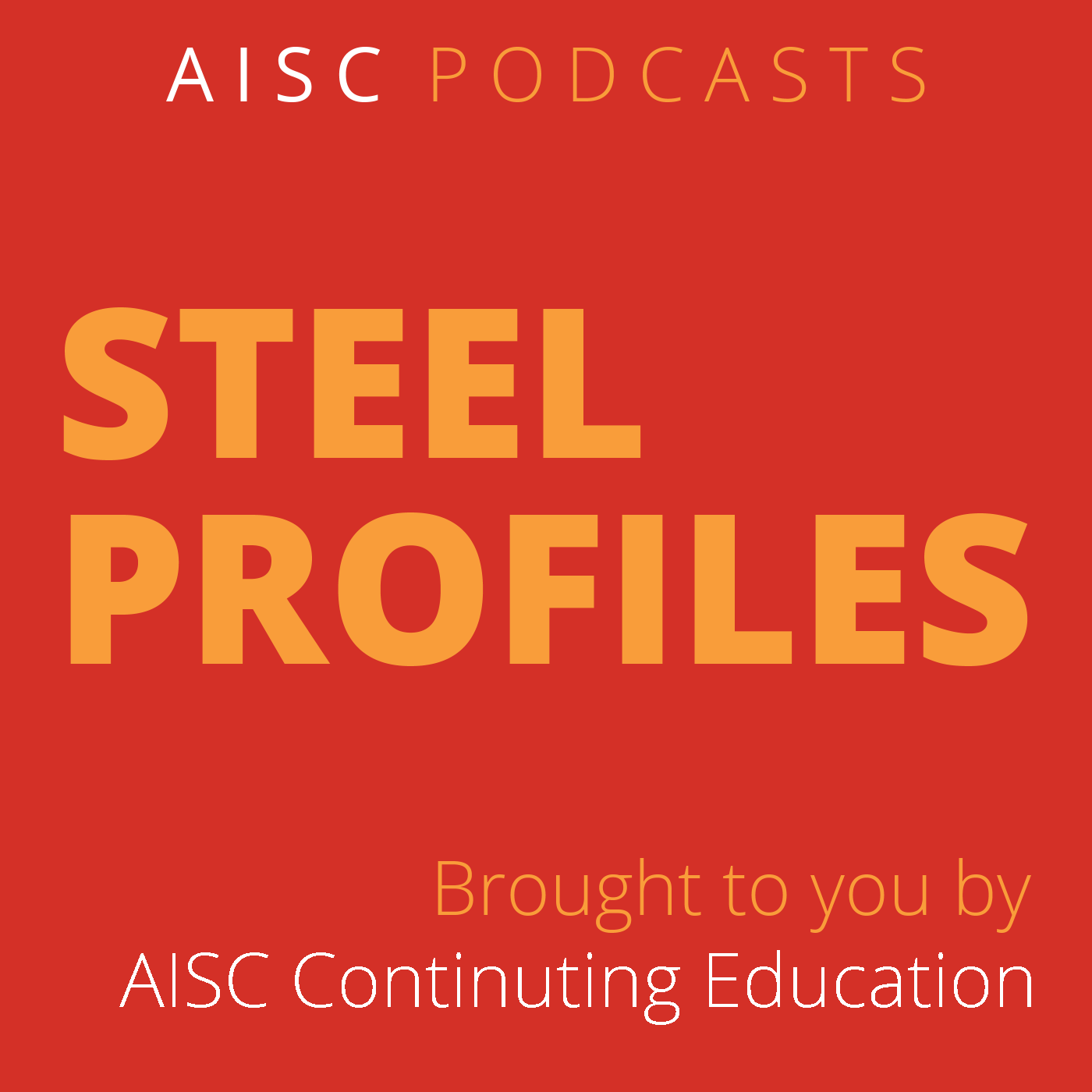 The American Institute of Steel Construction

The AISC Podcast series Steel Profiles! Join us for interesting interviews and topics relevant to the steel design and construction industry!

This new episode features a conversation with Ron Klemencic, P.E., S.E., Chairman and CEO at MKA.

This new episode features a conversation with Ron Ziemian

This new episode features a conversation with Lawrence Griffis

March 2012's episode features an interview with William A. Thornton, Ph.D., P.E., past Chairman of the AISC Manuals Committee for over 25 years and corporate consultant to Cives Corporation. Tune in to hear Bill and Margaret talk about his inspiration for the Uniform Force Method, the poetry of Tolkien and why connection design is the last bastion of rational design.

Lawrence A. Kloiber, P.E.,-LeJeune Steel Co. Listen to Larry chat about his career spanning 40+ years in the steel industry, his monumental projects like the Minneapolis Convention Center, and his thoughts on the next big steel innovation.

Roger Ferch, P.E.-AISC President. Tune in to hear Roger talk about his early aspirations to be a dentist, how he decided to take the job as AISC President and some of his favorite construction projects.

Thomas M. Murray, Ph.D., P.E.-Virginia Tech Emeritus Professor. Tom talks about his floor vibration research and tells me great stories about working on the St. Louis Arch, his many travel adventures and much more!

Charlie Carter, S.E., P.E., Ph.D.-AISC Vice President and Chief Structural Engineer. Tune in to hear Charlie tell me about his grad school days at Penn State, his collection of interesting steel mementos, and his 20-year career at AISC.

Reidar Bjorhovde, Ph.D., P.E. Tune in to hear Reidar catch me up on fascinating research going on around the world, what it was like to be an AISC regional engineer in the 70's, and to find out how to say "I love steel" in Norwegian!

Ted Galambos, Ph. D., P.E.-Ted tells me how he made it all the way from Budapest to North Dakota, about his dangerous research on the infamous Pruitt-Igoe housing project in St. Louis, and find out if he'll be writing his LRFD memoirs anytime soon.

Cindi Duncan, AISC's Director of Engineering. Cindi gives me the skinny on the new 14th Edition Steel Construction Manual, what it was like to be the first female engineer on staff at AISC, and what's coming up in the Design Guide series.

Interview with Mark Trimble of Huntington Steel from the perspective of a SteelDay host. Listen to Mark and I discuss how to host a Steel Day Event, how hosting an event can impact your business, and how to keep your events exciting every year.

Frank Hatfield, Ph.D., P.E., Chair of the NSSBC Rules Committee. Tune in to hear all about how the competition got its start, how a successful team approaches the competition, and about the 2011 competition 20th annual event at Texas A&M!

Scott Melnick, AISC Vice President. Known as "Chief Storyteller for the Structural Steel Industry", tune in to hear Scott talk about his brash youth at AISC, planning NASCC, and his favorite MSC stories.

Louis F. Geschwindner, Ph.D., P.E.-Former Vice President of Engineering and Research at AISC and Professor Emeritus at Penn State University. Hear Lou talk about his 40 years at Penn State, his tie collection, and his moustache maintenance.

Duane Miller, Sc.D, P.E., Manager of Engineering Services at The Lincoln Electric Company in Cleveland, OH, and recognized welding expert. Tune in to hear Duane talk about lessons in leadership, working with Omer Blodgett, and his own welding skills.

Shankar Nair, Ph.D., S.E., a principal and senior vice president of Teng & Associates, Inc., Chicago, IL. Join us and listen to Shankar discuss the upcoming challenges of being the newly elected Specification Chair and his views on our industry.

James Fisher, Ph.D., P.E.-Chair of the AISC Specification Committee from 2003-2009. Listen to his thoughts on his tenure as Specification Chair, what he thinks about LRFD and ASD, and where does he keep his green book these days?

DESCRIPTION
The AISC Podcast series Steel Profiles! Join us for interesting interviews and topics relevant to the steel design and construction industry!

Archived from iTunes at https://itunes.apple.com/us/podcast/aisc-podcast-series-steel-profiles/id1333164871. Items in this collection are restricted.
ACTIVITY

Copyright
℗ & © 2018 The American Institute of Steel Construction. All rights reserved. This recording or any part thereof may not be reproduced in any form with the written permission of the publisher.