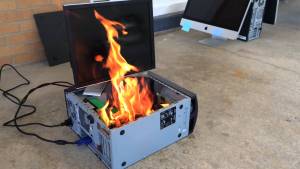 The Malware Museum is a collection of malware programs, usually viruses, that were distributed in the 1980s and 1990s on home computers. Once they infected a system, they would sometimes show animation or messages that you had been infected.

A quick presentation on Virus History by Daniel White at Project Cyber Virus, held on May 5th, 2015 at Swissnex San Francisco. In 2004, Daniel White’s computer was infected with the Sasser worm, a fast-spreading autonomous worm that made millions of computers around the world reboot continuously. Fascinated by the concept of malware, he spent the following years learning everything he could about the subject, from general malware news to specific details of every virus, becoming a self-taught...
favoritefavoritefavoritefavoritefavorite ( 4 reviews )
Topics: Virus, History, Malware

Presented at DEF CON 19 in Las Vegas, Nevada in 2011. "It's 2011, so this year it's going to be 25 years since Brain.A, the first PC virus, Join Mikko Hypponen as he talks about the history and evolution of computer viruses. From Brain to Stuxnet, he's spent his career tracking malware and will give a pretty good rundown on what has happened, when and why it mattered. Mikko Hypponen is based in Helsinki, Finland. He has been analysing computer viruses for more than 20 years. He has written...

This paper categorizes different types of virus activation routines which are found in existing viruses and also discusses what triggers these activation routines. Common viruses are used as examples where possible. This paper also covers why it is important to know what a virus exactly does if you are infected by one. Some horror stories of the worst possible activation routine in a virus are also included. The scope of this paper is limited to PC compatible machines.
Topics: virus, viruses, activation, routines, routine, antivirus, user, mosaic, hard, machine, activation...

The Malware Museum
Retroviruses: How Viruses Fight Back
by Mikko Hyppönen
texts

This paper will discuss methods viruses use or might use in the future to attack anti-virus programs. Attacks of this kind are becoming more common, as virus writers seem to be constantly looking for ways to make their viruses more efficient and vigorous. This paper also suggests how to make antivirus products more resistant against such attacks. The scope of this paper is limited to PC compatible machines
Topics: virus, program, viruses, attack, vims, scanner, programs, code, retrovirus, resident, virus...

DESCRIPTION
The Malware Museum is a collection of malware programs, usually viruses, that were distributed in the 1980s and 1990s on home computers. Once they infected a system, they would sometimes show animation or messages that you had been infected.

Through the use of emulations, and additionally removing any destructive routines within the viruses, this collection allows you to experience virus infection of decades ago with safety.
ACTIVITY