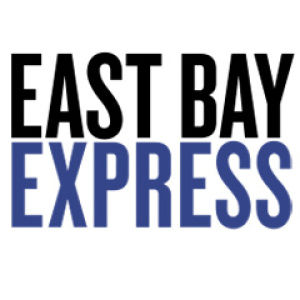 The East Bay Express is an Oakland-based weekly newspaper serving the Berkeley, Oakland, and East Bay region of the San Francisco Bay Area. It is distributed throughout Alameda County and parts of Contra Costa County every Wednesday.
More...

DESCRIPTION
The East Bay Express is an Oakland-based weekly newspaper serving the Berkeley, Oakland, and East Bay region of the San Francisco Bay Area. It is distributed throughout Alameda County and parts of Contra Costa County every Wednesday.
The Express is known for its investigative and longform news and feature stories, along with its award-winning arts, food, and wine coverage. The paper is also well known for its liberal viewpoint and for engaging in advocacy journalism.
A typical issue of the Express contains one or two in-depth news stories; an "Eco Watch" column about environmental issues; a political column called Seven Days; a 3,000-to-7,000-word cover story, events and music listings; music, dining, and movie reviews; a culture column; a parenting column; a tech column; and the syndicated columns "Savage Love" and Free Will Astrology.
The first edition of the Express was published in October 1978, during Governor Jerry Brown's first stint as governor of California. The Express was an independent publication at the time and its first editor was veteran journalist John Raeside; 1978 also saw the passage of Proposition 13 and the election of Oakland's first African-American mayor, Lionel Wilson. During the 1980s, the paper covered the rise and fall of Oakland drug lords Felix Mitchell and Mickey Moore, the closure of the Keystone Berkeley nightclub, and student protests at UC Berkeley that urged the regents to divest from apartheid South Africa. In 1989, the Express reported extensively on the 1989 Loma Prieta earthquake and the collapse of the Cypress Structure on I-880.
In the 1990s, the paper reported on the devastating 1991 East Bay Hills firestorm; the decision by Mills College in Oakland to admit male students for the first time; the rise of the crack cocaine epidemic; the rapid growth of development in Emeryville; the passage of the anti-immigration measure, Prop 187; the closure of East Bay military bases; the election of ex-state legislator Elihu Harris as mayor of Oakland; the return of the Oakland Raiders from Los Angeles; and the election of Jerry Brown as mayor of Oakland.
The paper was sold in February, 2001 to New Times Media. Editor John Raeside was replaced as editor of the Express by longtime journalist, Stephen Buel, and the Express' new tabloid layout replaced the original quarter-fold design. In October 2006, New Times merged with the parent company of The Village Voice to form Village Voice Media.
During the Aughts, the Express was the first news outlet to report on the bloody legacy of Your Black Muslim Bakery in Oakland. Members of the bakery were later convicted of murdering Oakland journalist Chauncey Bailey. Throughout the decade, the Express also closely covered the FBI investigation of then-state Senator Don Perata of Oakland. In addition, the paper reported on The Riders scandal in the Oakland Police Department; the rise of the hyphy music scene; the election of Ron Dellums as mayor of Oakland; and the Oakland A's' aborted attempts to move to Fremont and San Jose.
On 17 May 2007, Village Voice Media announced the Express was being bought by then-editor Stephen Buel and a group of investors. Jody Colley became publisher that year, and then Jay Youngdahl acquired majority control of the paper in August 2010. In December 2010, co-editors Robert Gammon and Kathleen Richards took over for Stephen Buel.
In 2010, Express reported on the election of Jean Quan as mayor of Oakland; Quan defeated ex-state Senator Don Perata. During the decade, the paper also covered the rise of progressives in Richmond, the tenure of Mayor Tom Bates in Berkeley, the growth of Oakland's food scene, and the election of Libby Schaaf as mayor of Oakland. In 2014, Robert Gammon became editor of the paper.