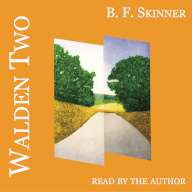 by
The B. F. Skinner Foundation

B. F. Skinner (1904-1990) recorded his 1948 novel, Walden Two, on cassette tapes as a birthday gift for his daughter, Julie. The utopian novel describes a fictional community that uses an experimental approach and behavioral principles to improve its members’ lives. In his 1976 preface, Skinner wrote, “Either we do nothing and allow a miserable and probably catastrophic future to overtake us, or we use our knowledge about human behavior to create a social environment in which we shall live productive and creative lives and do so without jeopardizing the chances that those who follow us will be able to do the same. Something like a Walden Two would not be a bad start.”

The B. F. Skinner Foundation has remastered the original tapes into digital files for the original 36 chapters, and added two bonus tracks: a 46-minute epilogue (Skinner reading his essay News From Nowhere, 1984), and a lecture On Having a Poem.