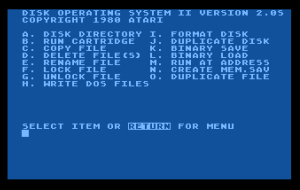 Applications for the Atari 8-bit family of computers.

Disc-based implementation of BASIC, reported to run programs at three times the speed for Atari BASIC and include additional commands for graphics, sounds, and structured programming.
Topics: basic, programming language

Music Construction Set (MCS) is a music composition notation program. It was originally developed in 1984 for the Apple II, and quickly ported to other systems of the era. It was designed and developed by Will Harvey and published by Electronic Arts. Harvey designed and programmed the original Apple II version of the game in assembly language when he was 15 and in high school. Though it is entertainment software, strictly speaking it is not a game, though it is often lumped together with them....
Topic: music composition, construction set

DESCRIPTION
Applications for the Atari 8-bit family of computers.