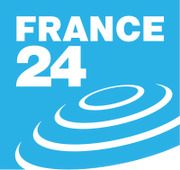 France 24 (pronounced France vingt-quatre [fʁɑ̃s vɛ̃tkatʁ] on all three editions) is an international news and current affairs television channel. The service is aimed at the overseas market, similar to BBC World News, DW-TV, NHK World and RT, and broadcast through satellite and cable operators throughout the world. During 2010 the channel started broadcasting through its own iPhone app. It started broadcasting on 6 December 2006.

Notes
This material may be protected by copyright law (Title 17 U.S. Code).