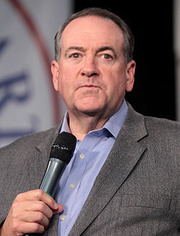 Hello everybody, we're on the road in Iowa. Today we're going to have a wonderful lunch. I'm making peanut butter and jelly, and I'm making it with some homemade peach jam made by one of our Iowa staff members Abby who made this along with her grandmother in Van Buren, Arkansas. This looks so good. And when I run out of this I've got some strawberry. So between my peanut butter and my homemade jam , we gonna be jammin' down the road.
Topics: Mike Huckabee, Huckabee For President, Washington, D.C., IOWA, ARKANSAS, ABBY, VAN BUREN, homemade,...
Source: https://www.youtube.com/watch?v=hu7vKTgiOGI

We're on 2nd Street and Hope, the street I lived on and about a block from my house. This is the fire station, this is a where my dad worked. Hope was a great little town to grow up in. It was a place where people knew each other, cared about each other, helped each other. My grandmother's house was here, right on the train tracks like my house was. Clinton boyhood home right here, but we won't spend a lot of time here. I think the most important value I learned as a kid growing up in a little...
Topics: Huckabee For President, Mike Huckabee, HOPE, ARKANSAS, CLINTON, forget, neighbors, neighborhood,...
Source: https://www.youtube.com/watch?v=FWE0GbSycN0

Hope. A word some have misused. But a compassionate Governor Mike Huckabee has never lost hope. In Hope, Arkansas, he learned this exceptional country can only be explained by the providence of God. Pro-life because life begins at conception. A defender of traditional marriage because it's biblical. The strength and moral clarity to fall to his knees and seek counsel from God. From Hope to higher ground, Mike Huckabee for President. Pursuing America's Greatness is responsible for the content of...
Topics: Religion, Pursuing America's Greatness, Mike Huckabee, AMERICA, ARKANSAS, huckabee, mike
Source: https://www.youtube.com/watch?v=idgZO37V5Ys

Governor Huckabee we're here to recommend a pardon for prisoner Maurice Clemmons. He was sentenced to one hundred and eight years and served eleven he's a model prisoner. OK. He's extremely violent. Been in 18 fights, extortion, dealing drugs and tried to kill another inmate. He was moved to a maximum security prison and received 29 disciplinaries and zero achievements. Why on earth are you asking for his release? He has recently found the lord. While governor of Arkansas Mike Huckabee's 1,033...
Topics: Candidate Biography, Crime, Negative Campaigning, Truth Squad 2016, Mike Huckabee, ARKANSAS,...
Source: https://www.youtube.com/watch?v=u-EXD_Xcx4M