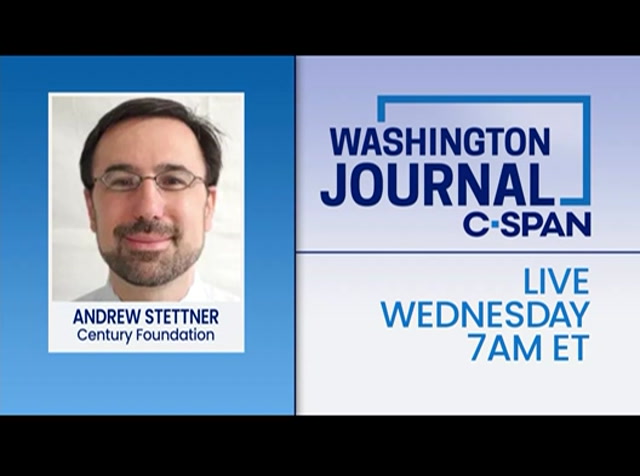 >> c-span's washington journal. every day we take your call live on the air for news of the day and discuss policy issues that impact you. wednesday morning, a preview of dhs secretary's budget hearing and homeland security policy. with immigration reporter michelle hackman. , and, the role of unemployment insurance and the move by some republican to cut benefits. watch c-span's washington journal 7:00 a.m. eastern wednesday morning. join the discussion with your phone calls, texts, tweets. >> secretary of state antony blinken held a joint news conference with israeli prime
6:13 pm 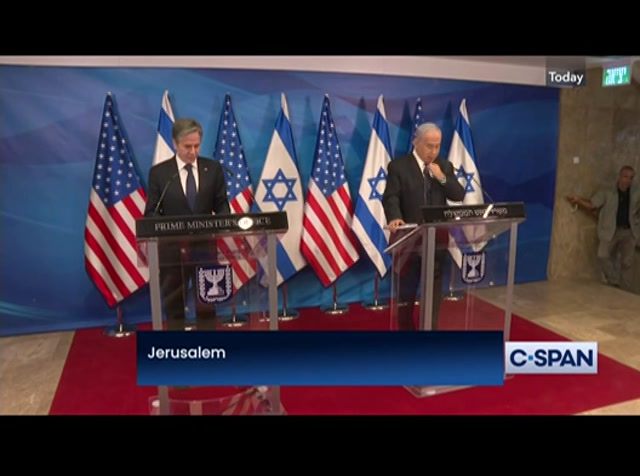 minister benjamin netanyahu to discuss u.s. support for israel and the situation in gaza after several days of violence. this was a secretary blinken's first of parents at the middle east come after a cease-fire agreement between israel and hamas went into effect. >> secretary -- p.m. netanyahu: secretary blinken, i'll come to jerusalem, your first visit. we had a long discussion. we were running late. i want to be very brief and to speak about three points. the first, is a vote of thanks to president biden and you for firmly supporting israel's right
6:14 pm

of self-defense. secretary blinken in a previous capacity in 2014, when we had another round of engagement against hamas aggressive -- aggression supported us with a quarter of a billion dollars you personally shepherded through the system quickly. we remembered and are very grateful to you. you are giving meaning to this now again with replenishments that has saved civilian lives on both sides and we are grateful for that, too. we too will give meaning to our commitment to self-defense. if hamas breaks the calm and attacks israel, our response will be very powerful. we discussed ways on how to work together to present hamas' rearmament. the second point is iran.
6:15 pm 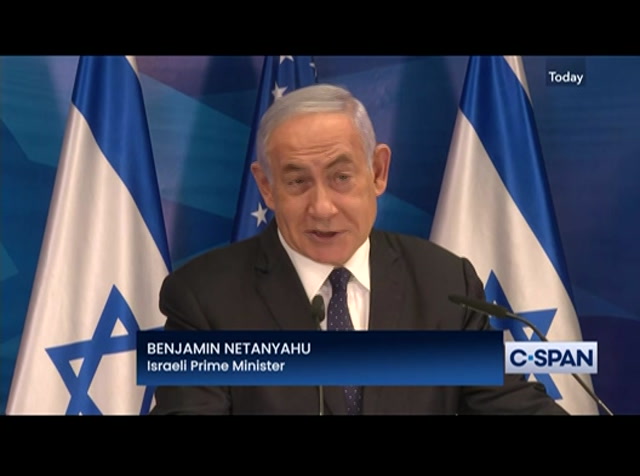 we discussed many regional issues, but none is greater than iran. i hope the united states will not go back to the old jcpoa. we believe that deal paves the way for iran to have an arsenal of nuclear weapons with international legitimacy. we also iterated that whatever happens, israel will always reserve the right to defend itself against a regime committed to our destruction, committed to getting weapons of mass describe -- mass destruction to that end. third, peace. we need to work together to expand normalization between israel and the arab and muslim world and deepen the peace treaties we already have. we discussed also how to improve the lives and conditions of the
6:16 pm 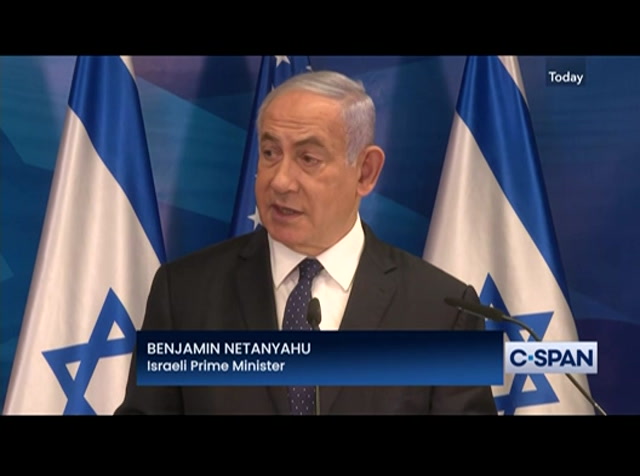 palestinians, the humanitarian conditions in gaza, including the question of the return of our mia's and two civilians there, as well as building economic growth for the west bank, with international cooperation and participation. as for peace with palestinians, formal peace, president biden was correct when he said, you are not going to get peace until israel is recognized as an independent jewish state. that is the key. i could not agree more with president biden and could not be happier with him and your delegation. in jerusalem, we have a lot to work for. we have common goals of peace, security, and prosperity. i look forward to working with you on this visit and more.
6:17 pm 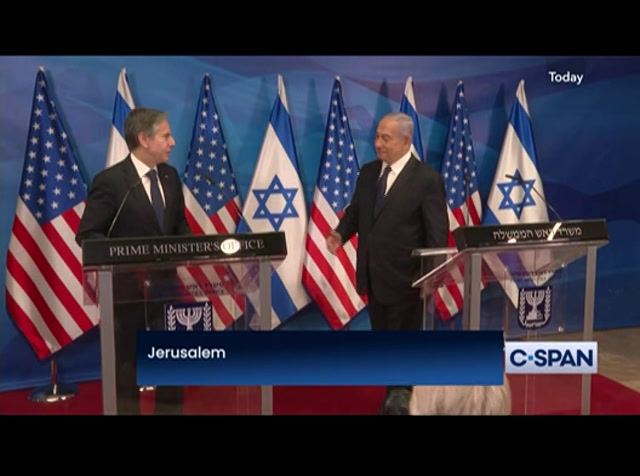 welcome. sec. blinken: thank you. prime minister, thank you. thank you for hosting us today. thank you for the very good and lengthy conversation. i am looking forward to spending more time with some of our colleagues, as well with president abbas and other palestinian leaders. the president asked me to come here today for four reasons. first, to demonstrate the commitment of the united states to israel's security, to start to work toward greater security and reduce tensions in the west bank and jerusalem, to support urgent humanitarian reconstruction assistance for gaza to benefit the palestinian people, and rebuild our relationship with the palestinian people and palestinian authorities.
6:18 pm 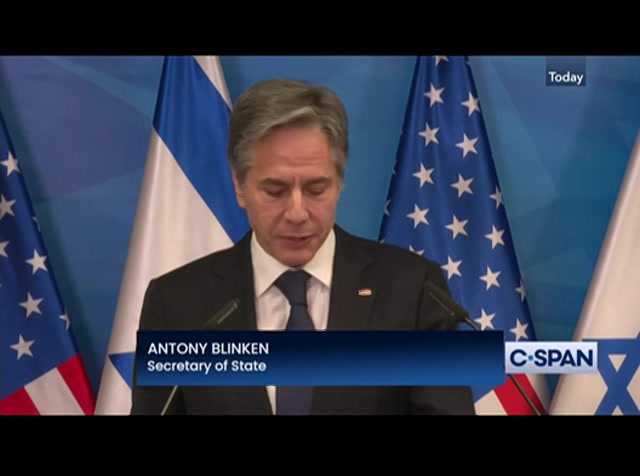 in tents, find the scenes diplomacy led by president biden, working closely with the prime minister, helped produce last week's cease-fire. now we believe we must build on it. that starts with the recognition of losses on both sides were profound. casualties often reduced to numbers, but behind every number is an individual human being, a daughter, a son, daughter, grandparent, best friend. and as the talmud teaches, to lose a life is to lose a whole world, whether that life is palestinian or israeli. i underlined something president biden made crystal clear throughout the violence. the united states fully supports israel's right to defend itself against attack, such as the thousands of rockets fired by hamas indiscriminately against israeli civilians. the president, as many of you
6:19 pm 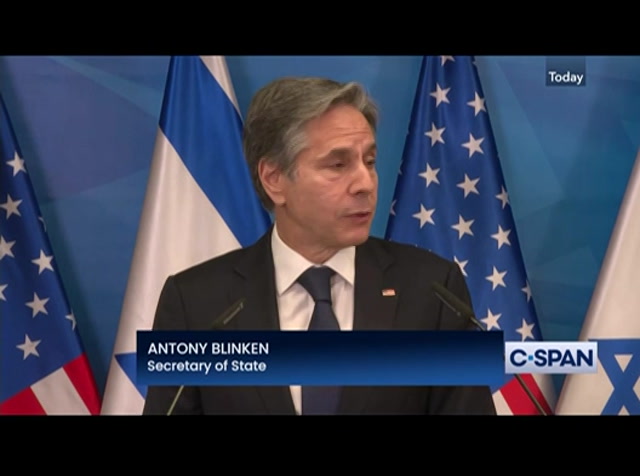 know, this commitment is personal, it runs deep. he has been one of israel's most steadfast supporters for the last 50 years, having worked closely with every prime minister, starting with golda meyer. and now with prime minister netanyahu. we had a detailed discussion about israel's security needs, including replacing iron dome. we will strengthen all aspects of our long-standing partnership. that includes consulting closely with israel, as we did today, on the ongoing negotiations in vienna, a potential return to the iran nuclear agreement, at the same time we work to counter iran's destabilizing actions in the region. we know that to prevent a return to violence, we have to use the space created to address a larger set of underlying issues and challenges. that begins with tackling the
6:20 pm 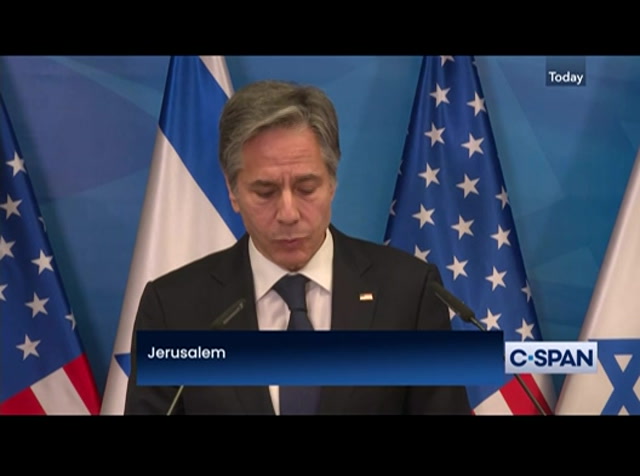 humanitarian situation in gaza and starting to rebuild. the u.s. will rally international support around that effort, while making our own significant contributions, including some i will announce today. we will work with partners, closely with all, to ensure hamas does not benefit from the reconstruction assistance. at the same time, we need to expand opportunity for palestinians in gaza and on the west bank, by strengthening the private sector, expanding trade and investment, and other means of assistance and investment, to help foster a more stable environment that benefits palestinians and israelis. prime minister, i had a chance to discuss other steps that need to be taken by leaders on both sides for their shared future. as president biden said, we believe palestinians and israelis equally live -- deserve
6:21 pm 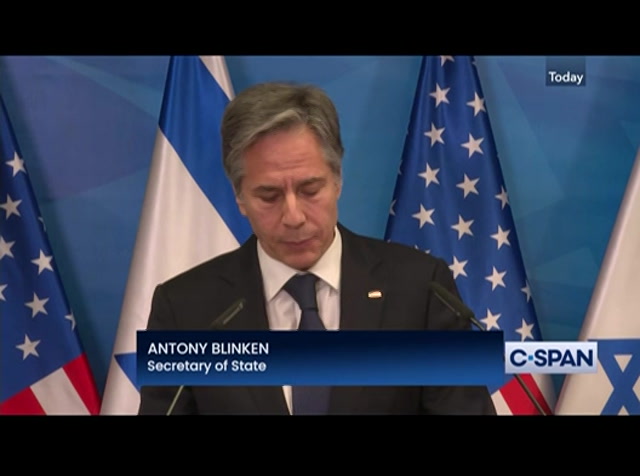 to live safely and securely, to enjoy equal measures of security and democracy, to be treated with dignity. we also discussed intercommunal violence that erupted in israel during the conflict. healing these wounds will take leadership at every level. from elected officials, community leaders, neighbors. we welcome the statements the prime minister may and members of his government made, condemning the attacks, regardless who they targeted. in the united states we witnessed a shocking eruption of anti-semitic attacks. as president biden said yesterday, they are despicable and must stop. there is a lot of hard work ahead to restore hope, respect, and trust across communities. we have seen the alternative and that should cause all of us to redouble our efforts to improve the lives of palestinians and
6:22 pm 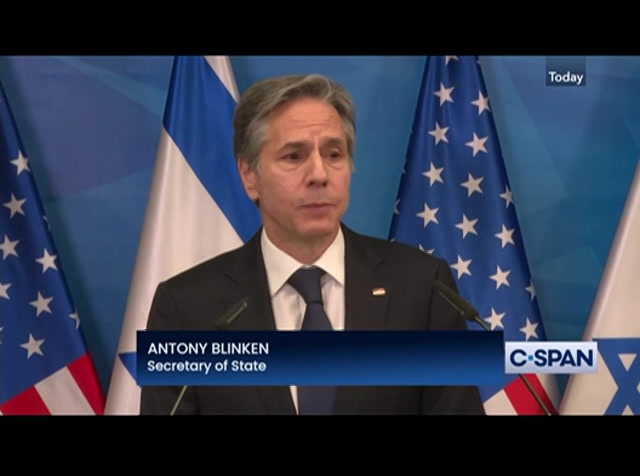 israelis alike. prime minister, thank you for the time, the very good conversation, and we look forward to doing a lot of work together. p.m. netanyahu: thank you and your president for your strong statements against anti-semitism masquerading as anti-zionism. you took a bold position. we thank all decent people everywhere appreciate that stance. thank you. >> i apologize, there are no questions at this time. ♪ >> on sunday june 6, a military historian matt hastings will be
6:23 pm 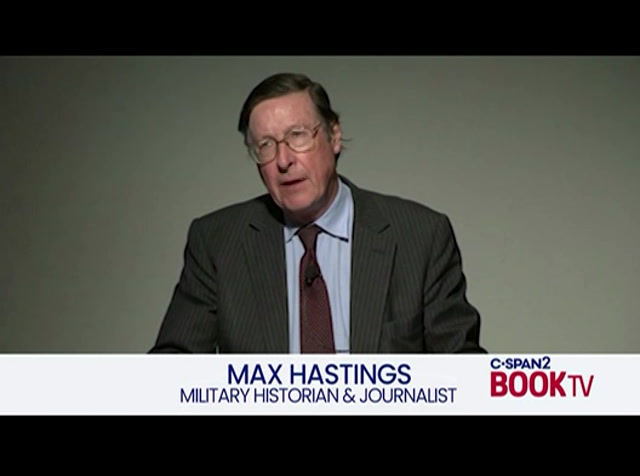 our guest on in-depth. >> in saigon, they faced emily asian. present revolutionaries prevailed against western will and hard work. a stairway on the evening of the 29th they ascended to a rooftop helicopter, took place among symbolic images of that era. in my generation of war correspondents, the struggle was foremost of our careers. i was one who flew out of the u.s. embassy on that tumultuous, terrified day. >> his most recent book, the soon to be released "operation pedestal." others include " europe goes to war," "1943," join with facebook
6:24 pm 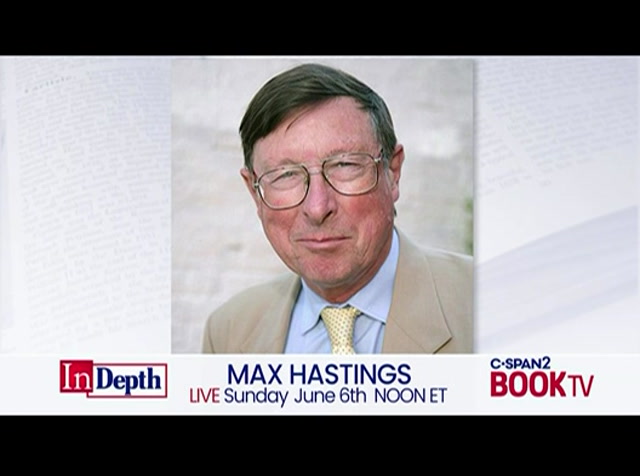 comments and tweets on in-depth, live at noon eastern sunday june 6, with max hastings. tune in sunday, july 4, for a conversation with a harvard professor, annette gordon reed. on book tv on c-span2. ♪ >> listen to c-span's podcast book notes plus. this week -- >> christopher bonner teaches courses covering african-american politics and culture, slavery and emancipation in the atlantic world. dr. bonner is an associate professor at the university of maryland. he graduated with a bachelor of arts from howard university and received his phd from yale. professor bonner's first book is titled "remaking the republic: black politics and the creation
6:25 pm 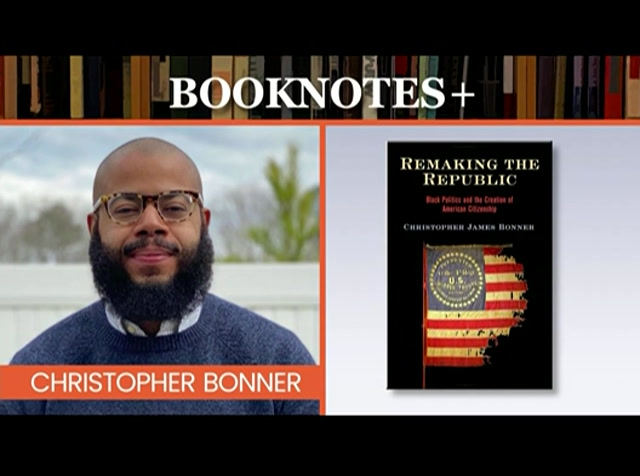 of american citizenship." he writes in the introduction, his book is rooted in the extensive public record of antebellum black protest. >> book notes plus, new episodes tuesday morning. subscribe where you get your podcasts. there is more on c-span podcasts at c-span.org/podcasts. host: lisa cylar barrett serves as director of policy at the naacp legal defense and education fund joining us on the one-year anniversary of george floyd's murder. the same question we have been asking viewers throughout the past two hours of the program, in the past 365 days what has changed and what hasn't? ms. barrett: good morning, john. thank you for having me today. i want to take a moment to acknowledge the family and friends of george floyd and the immense grief they continue to experience as a result of the killing of mr. floyd. ef tco
left
right
Borrow Program
tv

Secretary of State Antony Blinken held a joint news conference with Israeli Prime Minister Benjamin Netanyahu on his first official visit to the Middle East. Secretary Blinken reiterated the United States' support of Israel's right to self-defense and promised "significant contributions" to rebuild Gaza after days of violence between Israel and Hamas. The Israeli Prime Minister thanked the U.S. for its support and promised any further attacks on Israel would be met with a "very powerful" response.