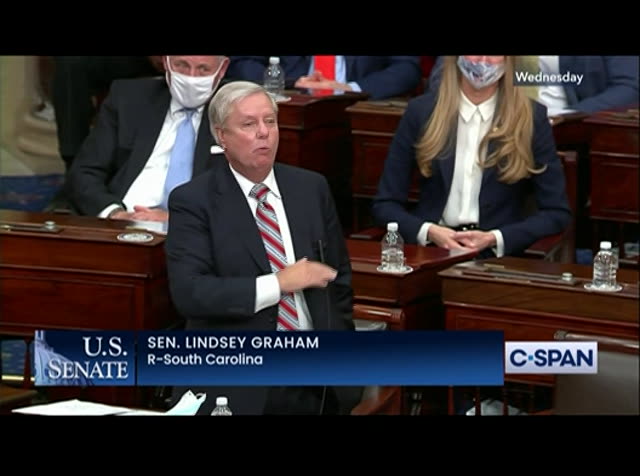 good friend from illinois, to make sure we have a chance to argue among ourselves. and when it is over, it is over. it is over. joe biden, i travel the world with joe. i hoped he lost. i prayed he would lose. he won. he's the legitimate president of the united states. i cannot convince people, certain groups, by my words, but i will tell you by my actions that i, above all others in this body need to say this, joe biden and kamala harris are lawfully elected and will become the president and the vice president of the united states on january 20. right here providing over the senate.t here providing
6:20 am 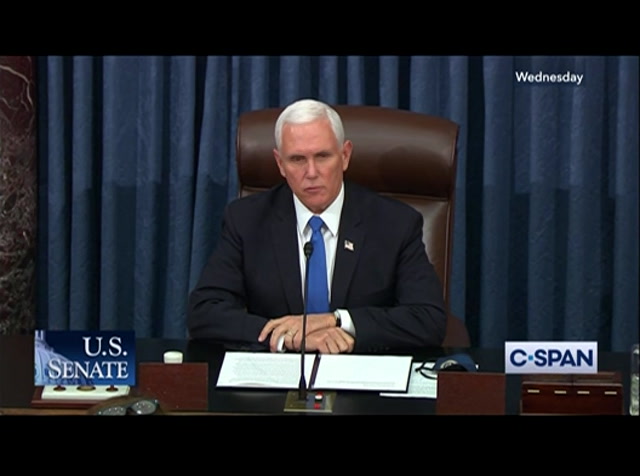 >> today was a dark day in the history of the capital. but the people's work continues. we condemned the violence that took place here in the strongest possible terms. we grieve the loss-of-life in these hallowed halls, as well as the injuries suffered by those who defended our capitol today. and we will always be grateful to the men and women who stayed at their posts to defend this historic place. to those who wreak havoc in our win.ol today, you did not violence never wins. freedom wins. this is still the people's
6:21 am 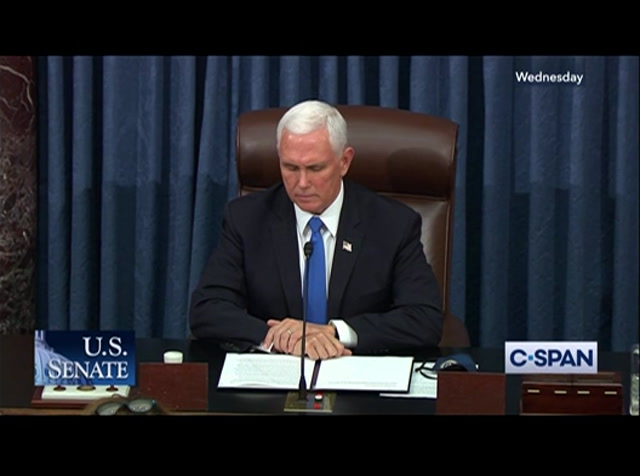 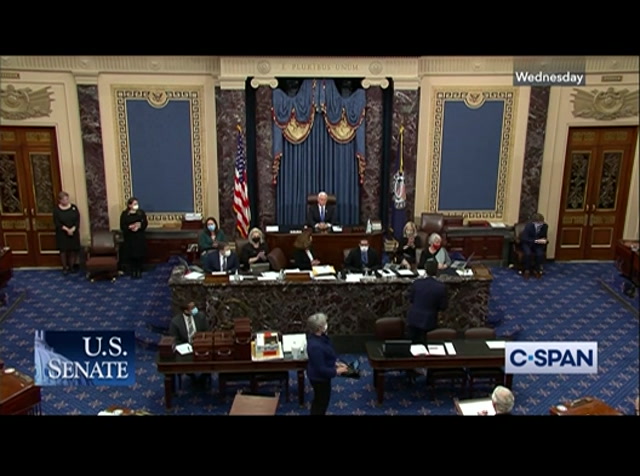 mr. mcconnell: mr. president. the >> mr. president. i asked that the majority leader and the democratic leader be allowed to speak, and two hours of debate in relation to the objection raised on the arizona. the vice president: is there objection? without objection, so ordered. mr. mcconnell: i want to say to the american people the united states senate will not be intimidated. we will not be kept out of this chamber by thugs, mobs, or threats. we will not bow to lawlessness
6:23 am 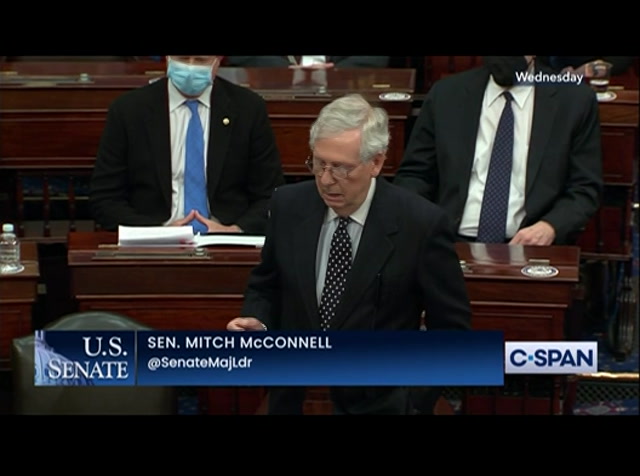 or intimidation. we are back at our posts. we will discharge our duty under the constitution and for our nation. and we're going to do it tonight. this afternoon, congress began the process of honoring the will of the american people and counting the electoral college votes. we have fulfilled the solemn duty every four years for more than two centuries. whether our nation has been at war or at peace, under all manner of threats, even during an ongoing armed rebellion and the civil war, the clock work of our democracy has carried on. the united states and the united states congress have faced down much greater threats than the unhinged crowd we saw today.
6:24 am 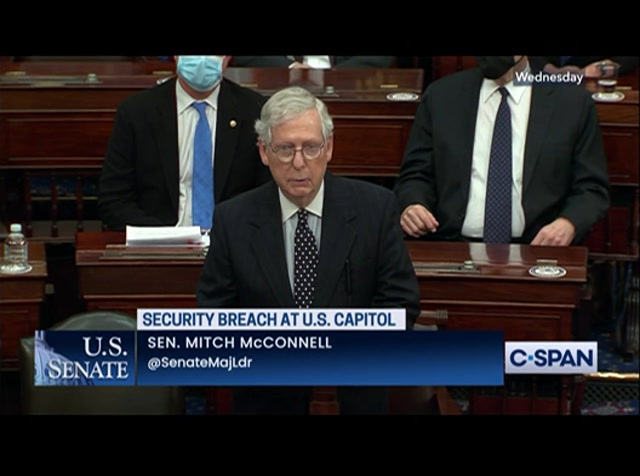 we've never been deterred before, and we will be not deterred today. they tried to disrupt our democracy. they failed. they failed. they failed to attempt to obstruct the congress. this failed insurrection only underscores how crucial the task before us is for our republic. our nation was founded precisely so that the free choice of the american people is what shapes our self-government and determines the destiny of our nation. not fear, not force, but the peaceful expression of the popular will. now, we assembled this afternoon to count our citizens' votes and to formalize their choice of the
6:25 am 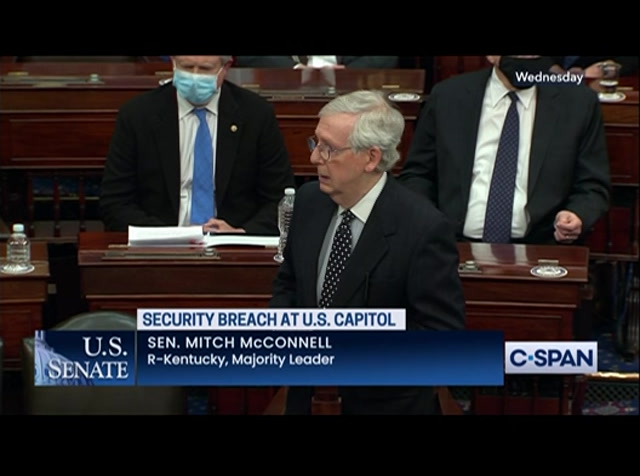 next president. now we're going to finish exactly what we started. we'll complete the process the right way by the book. we'll follow our precedents, our laws, and our constitution to the letter. and we will certify the winner of the 2020 presidential election. criminal behavior will never dominate the united states congress. this institution is resilient. our democratic republic is strong. the american people deserve nothing less. the vice president: the democratic leader.
quote
6:26 am 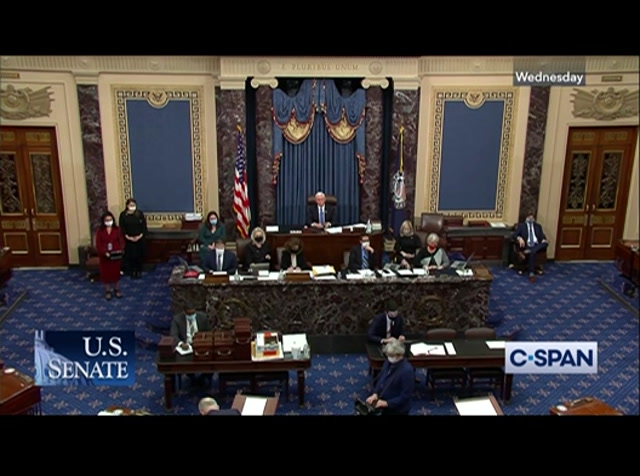 mr. schumer: mr. president. mr. president, it is very, very difficult to put into words what has transpired today. i have never lived through or even imagined an experience like the one we have just witnessed in this capitol. president franklin roosevelt set aside december 7, 1941, as a day that will live in infamy. unfortunately, we can now add january 6, 2021, to that very short list of dates in american history that will live forever in infamy. this temple to democracy was desecrated. its windows smashed. our offices vandalized. the world saw americans' elected officials hurriedly ushered out because they were in harm's way. the house and senate floors were
6:27 am 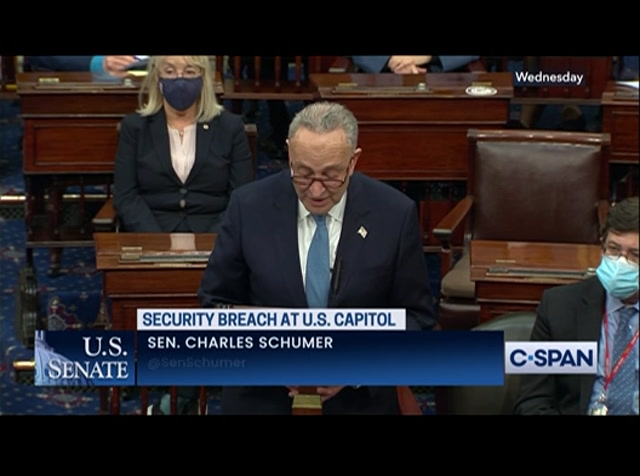 places of shelter until the evacuation was ordered, leaving rioters to stalk these hallowed halls. lawmakers and our staffs, average citizens who love their country, serve it every day, feared for their lives. i understand that one woman was shot and tragically lost her life. we mourn her and feel for her friends and family. these images were projected to the world. foreign embassies cabled their home capitals to report the harrowing scenes at the very heart of our democracy. this will be a stain on our country not so easily washed away. the final terrible, indelible legacy of the 45th president of the united states, undoubtedly our worst. i want to be very clear.
6:28 am 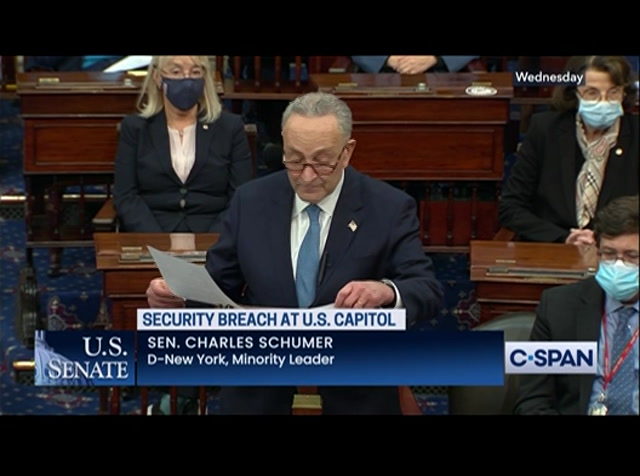 those who performed these reprehensible acts cannot be called protesters. no, these were rioters and insurrectionists, goons and thugs, domestic terrorists. they do not represent america. they were a few thousand violent extremists who tried to take over the capitol building and attack our democracy. they must and should be prosecuted to the full extent of the law, hopefully by this administration, if not certainly by the next. they should be provided no leniency. i want to thank the many of the capitol hill police and secret service and local police who kept us safe today and worked to clear the capitol and return it to its rightful owners and its rightful purpose. i want to thank the leaders,
6:29 am 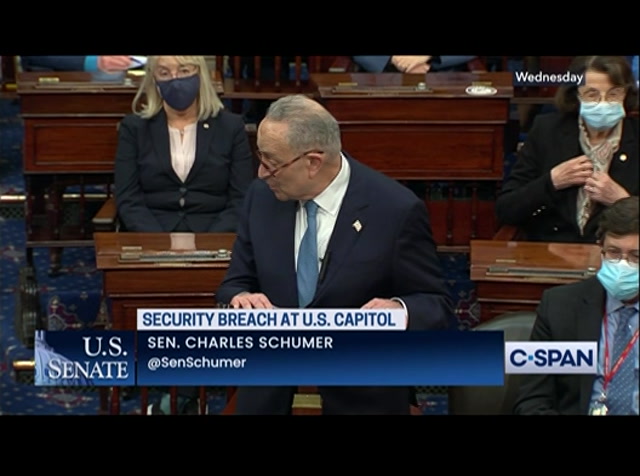 democrat and republican, house and senate. it was speaker pelosi, leader mcconnell, leader mccorrespondent think and myself who came doth together and decided that these thugs would not succeed. that we would finish the work that our constitution requires us to complete. in the very legislative chambers of the house and senate that were desecrated, but we know always belong to the people and do again tonight. but make no mistake, make no mistake, my friends, today's events did not happen spantainiously. the president, who promoted conspiracy theories that motivated these thugs, the president, who exhorted them to come to our nation's capital, egged them on, he hardly ever discourages violence and more often encourages it, this president bears a great deal of
6:30 am 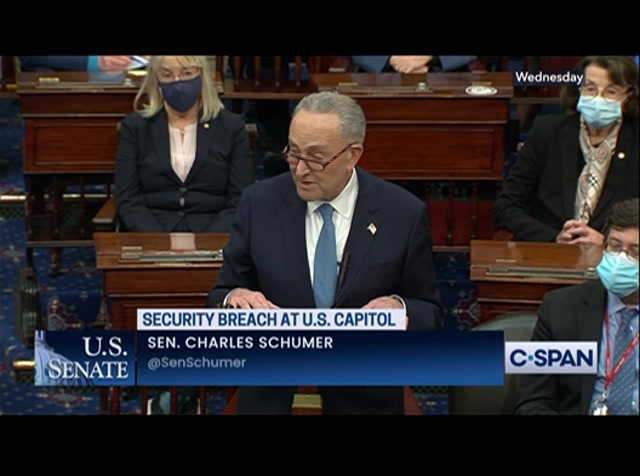 the blame. this mob was in good part president trump's doing, incited by his words, his lies. this violence in good part his responsibility, his ever-lasting shame. today's events certainly -- certainly -- would not have happened without him. now, january 6 will go down as one of the darkest days in recent american. a final warning to our nation about the consequences of a demagogic president. the president who enable him, the captive media that parrots his lies and the people who follow him as he attempts to push america to the brink of ruin.
6:31 am 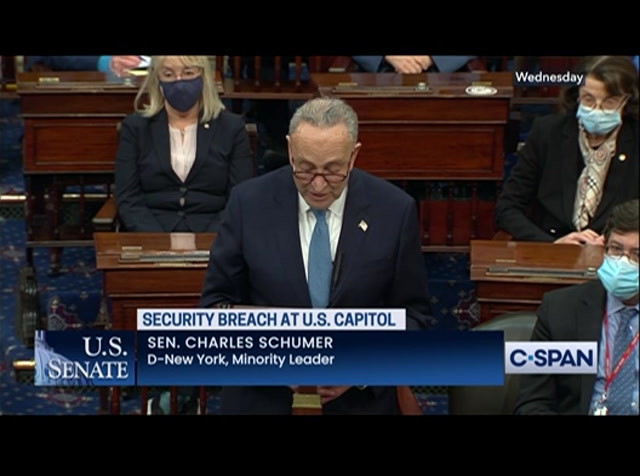 as we reconvene tonight, let us remember, in the end, all this mob has really accomplished is to delay our work by a few hours. we will resume our responsibilities now, and we will finish our task tonight. the house and senate chambers will be restored good as new and ready for legislating in short order. the counting of the electoral votes is our sacred duty. democracy's roots are deep and strong and they will not be undone ever by a group of thugs. democracy will triumph, as it has for centuries. so to my fellow americans who shocked and appalled by the images on their televisions today and who are worried about the future of this country, let me speak to you directly. the divisions in our country clearly run deep, but we are a
6:32 am 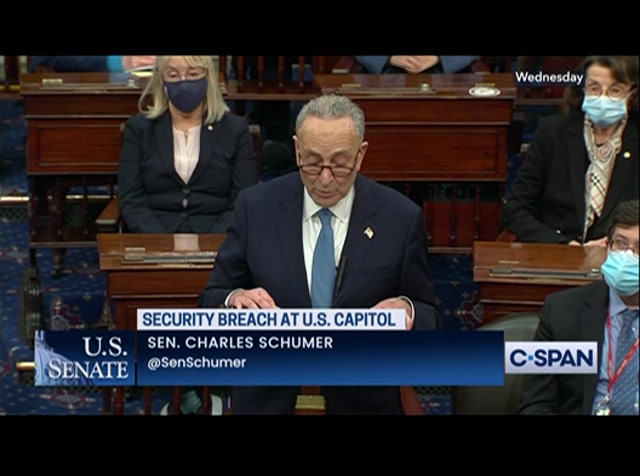 resilient, forward-looking and optimistic people, and we will begin the hard work of repairing this nation tonight because here in america we do hard things. in america, we always overcome our challenges. the speaker: the house will be in order. today, a shameful assault was made on our democracy. it cannot, however, deter us from our responsibility to validate the election of joe biden and kamala harris. congress has returned to the capitol. we always knew that this responsibility would take us into the night and will stay as long as it takes. our purpose will be accomplished.
left
right
Borrow Program
tv