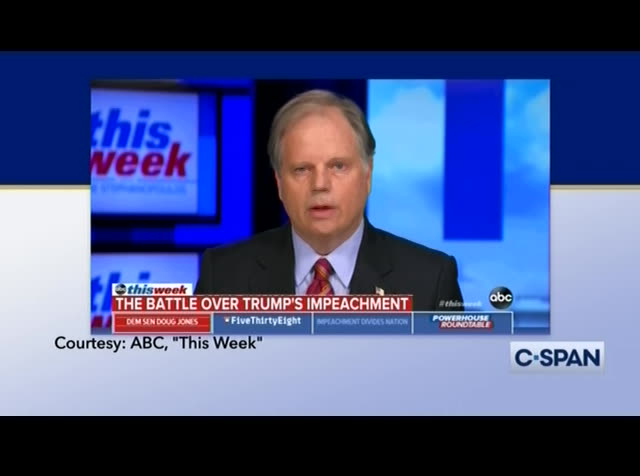 have with the media, everyone wants to talk about this in the political terms and political consequences. this is a more serious matter than that. this has to do with the future of the presidency and how we want our presidents to conduct themselves. it has to do with the future of the senate and how a senate should handle impeachment articles that come over. that is how i am looking at this. if i did every thing based on a political argument, all he would need is a computer to match a button. that is not what this country is about. it is not what i intend to do. think thed that you consensus in the senate would be to let the house make its case, the white house make its case, and put forward a motion to vote without witnesses. is that still what you see happening? i think so.: that is general discussion within the conference. the case is thin. if they ever send it over to us.
4:13 pm

we will let both sites have a fair chance to make their case and we should take a vote. >> you believe there are 51 votes in the senate for a quick trial with no witnesses? if that something moderate republicans will support? >> i cannot speak for anybody else. the scuttlebutt inside of the conference would seem to support that. >> i was the only member of the senate sitting on the floor and listen carefully to what senator mcconnell said and it was clear to me, he made up his mind, he is not interested in evidence, not interested in the facts, he wants to get this over red -- over with. that is a serious problem. i think the american people expect us to carefully consider the evidence, not conceal the evidence. they are looking for a fair trial. a real trial involves documents and witnesses. >> do you think demra
left
right
Borrow Program
tv

On ABC's "This Week," Sen. Ron Johnson (R-WI) talked about how the impeachment process might proceed at a Senate trial.