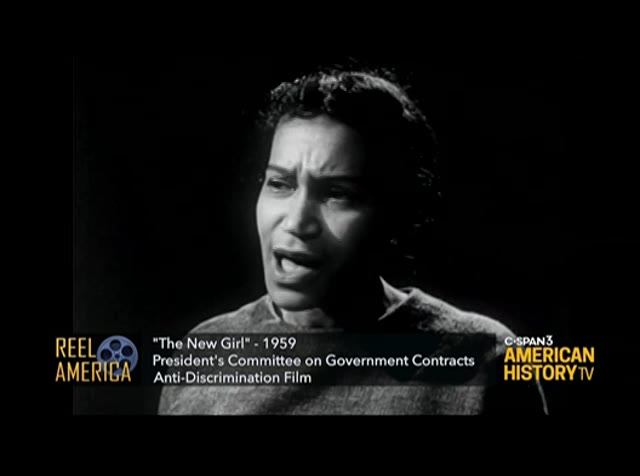 finish school. and now mary is working in a shop and crying her eyes out because she cannot work in an office. maybe she can work in an office. if she can, i do not want to see her throwing away the chance because she is afraid. maybe those people hate her. maybe some of them do. maybe she is imagining a lot of it, dreaming up trouble. if this is the way it is, then she has to find out. the only way to find out is to go to work tomorrow. watch more of "the new girl" tonight at 10:00 p.m. eastern here on american history tv. ♪ narrator: here on the black sea near the city of yalta is the meeting place of the leaders of britain, russia, and the united states, the most successful
9:51 am 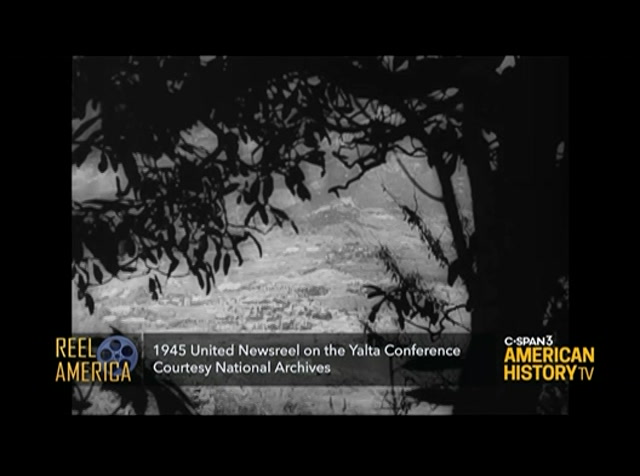 international conference of the war. ♪ narrator: the castle, once a summer palace, is where the crimean conference is to take place. the surrounding countryside is busy with preparation. military convoys bring necessary supplies. ♪ narrator: special communications lines are strung to the palace. ♪ narrator: under three flags at a nearby airfield, russian officials await the arrival of the british and american delegations. ♪
9:52 am 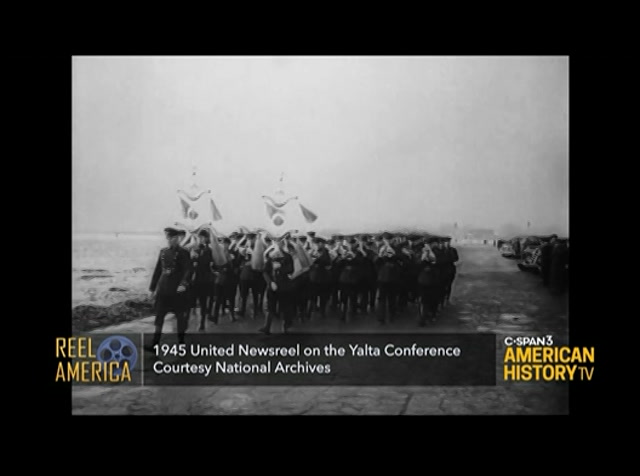 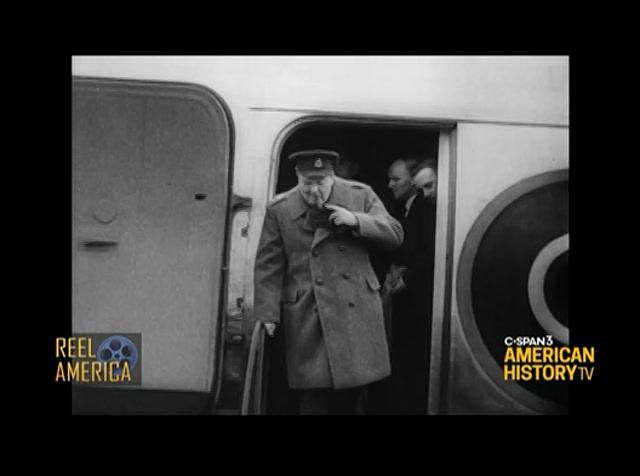 ♪ narrator: also arriving by plane after a 6000 mile trip is franklin d. roosevelt, president of the united states. ♪
9:54 am 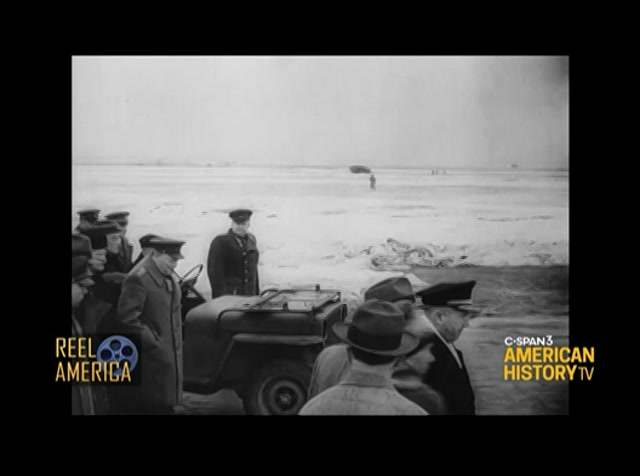 narrator: the first of eight days of day and night conferences at the castle begins with the arrival of distinguished participants. ♪ narrator: sarah churchill oliver, accompanying her father, greets president roosevelt's daughter. ♪ narrator: marshall joseph stalin, premier of the soviet union, at the time of the first conference 14 months ago, the ground he walks was still in the enemy's hands. ♪
9:55 am 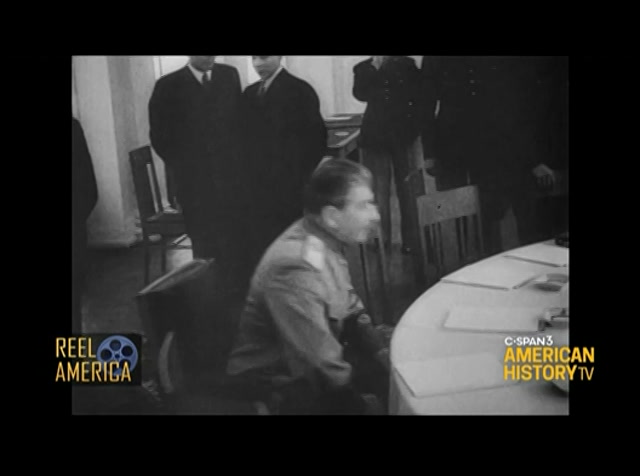 narrator: the three parties reach a firm accord on military and political points, and coordinated plans are made for great new blows against germany from all directions. reaffirming the resolve of the united nations to cooperate fully after the war, roosevelt, churchill, and stalin reached an agreement on the foundations of european peace. germany shall be disarmed. german militarism and nazism will be destroyed. germany shall be occupied in zones, with france a major participant. an organization for world security will be permanently established. the three leaders reaffirmed their faith in the principles of the atlantic charter. ♪ narrator: moving outside, sarah oliver, catherine harriman, daughter of the american ambassador, and mrs. potter, watch as the leaders interrupt
9:56 am 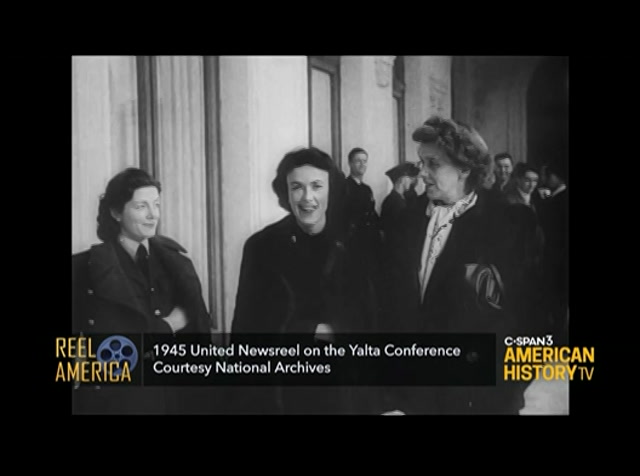 the conference for history making pictures. says a special communique signed by all three, our meeting in the crimea has reaffirmed our determination to maintain and strengthen in the peace to come, that unity of purpose and the action that has made victory possible and certain for the united nations in this war. we believe that this is a sacred obligation which our government owed to our peoples and to all peoples across the world. ♪ narrator: winston churchill. franklin roosevelt. joseph stalin. ♪ >> tonight on lectures in history, we visit the utah state university classroom to learn
9:57 am 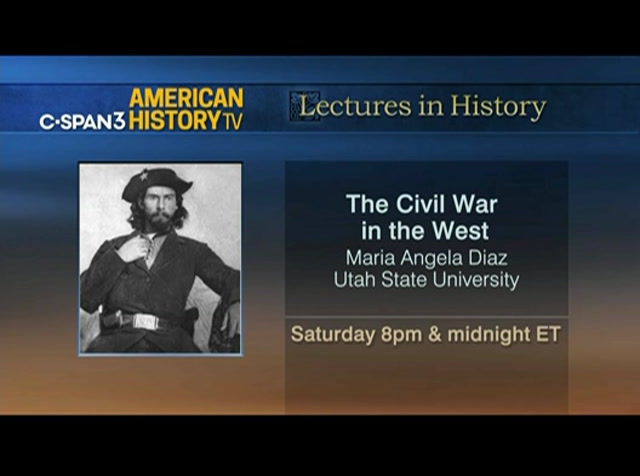 about the civil war in places such as missouri, kansas, texas, and arizona. here is a preview. is one of the reasons you see more of the carrillo warfare in the west because it was so far and inc. and richmond more underdeveloped states? why do you not see that as much? >> the reason you do not see the big armies as much is because at the same time this fuzzy warfare stuff is going on in the west, and the eastern theater and western feet -- theater, the union and confederate armies are still trying to control the population. in the eastern theater, they are trying to capture the flag. they are trying to capture washington and richmond. that is a concentration.
9:58 am 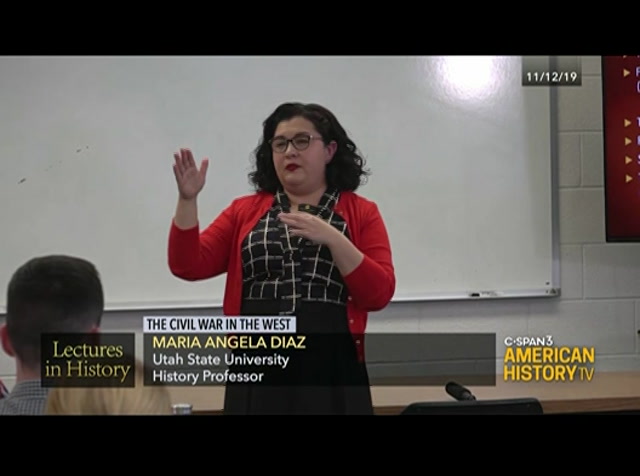 . david points toward a real issue. arehe same time as they fighting the big fancy battles, all of this other stuff is going on in the trans-mississippi theater. how much you can actually pay attention to the eastern theater and the trans-mississippi and the west all at the same time is extremely taxing. it has an impact on the war. it has an impact on the confederacy and union. we will see that play out more and more and more as we start to talk about the >> learn more on lectures in history, tonight here on american history tv. sunday, conversation on u.s.
9:59 am 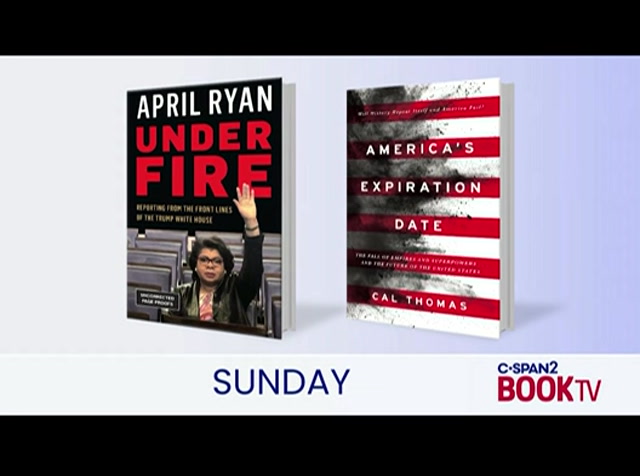 presidents, plus america as a superpower, starting at noon eastern. a live conversation with author and white house correspondent april ryan. road, idy just down the studied for this. be knowing that i would under fire, or asking questions. eache asked questions of president, the same except for one, of each one over the last 21 years, but asking questions now has me fearing for my life. "underlatest book is fire." yourthe conversation if phone calls and tweets and texts and facebook messages. at 9:00 p.m. eastern, in his exploresok, cal thomas
10:00 am 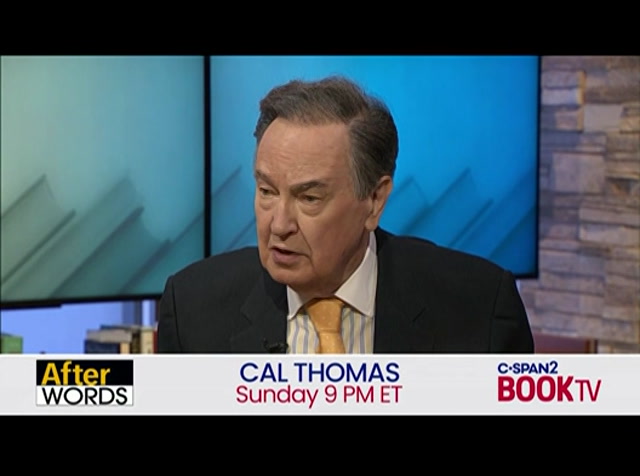 the rise and fall of nations historically and the role of america as a super bowl -- superpower. >> we are not each other's enemies as lincoln said. if we do not make this great experience called democracy work for the succeeding generations, we will expire. there is no guarantee. when things are looking great, it is time to shore up the foundations. watch of these authors sunday on book tv on c-span two. >> each week, american artifacts takes you to museums and historic basis to learn about american history. this looks at the national debate over the
left
right
Borrow Program
tv