but then you need a separate vote to disqualify him from holding future office and that only requires a majority, not two thirds so the senate but they have to convict him first. you get two thirds voting to convict and then only a majority saying that has to be just call abide in the future. >> our guest is the president ceo of the constitutional center and go to his website at constitution center .org to find out what the constitution says on a number of things but particularly as far as impeachment is going and jeffrey rosen talking to us about that. as always, thank you for your time. >> guest: thank you. >> the second impeachment trial for donald trump is set to resume at 1:00 p.m. eastern. majority leader schumer talked about today session earlier today here is a portion of his comments. >> but first i want to say a word on impeachment. the senate has a solemn responsibility to try and hold donald trump accountable for the most serious charges ever, ever
11:49 am

levied against a president. those who say let's move on and that brings unity is false but when you such a serious invasion of the capital incited by a president who, we know or ask or told people the election was false and urge people to come to washington and urge people to march on the capital in the senate has to find is he guilty of inciting the violence that ensued. when you have such a serious charge sweeping it under the rug will not bring unity but keep the wounds open. you need truth and accountability and i believe the managers will present a very strong case and the evidence will be powerful and the evidence, some of it will be new
11:50 am 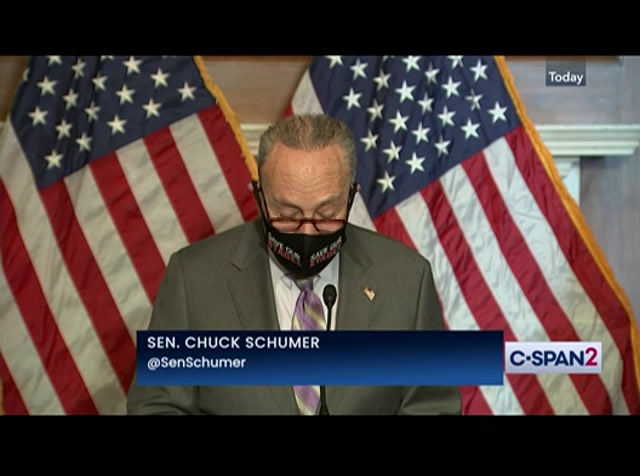 and i urge all my colleagues to pay careful attention to the evidence. i particularly urge my republican colleagues, despite the pressure on them to be very real attention to the evidence here because it's very serious every senator democrat and her public and has to approach this trial with the gravity it deserves. and that is really important to the future of this country. a mob of white supremacist and insurrectionist's and terrorists falsely believe the election was stolen and tried to overthrow the government and as i said, the trial is about, whether the president is chiefly responsible for beating the mob with what motivated their behavior and told them to come to dc and directed them to the capital and guilty of inciting violence. >> host: so many constitutional issues being at
left
right
Borrow Program
tv

Senate Majority Leader Chuck Schumer (D-NY) told reporters on Capitol Hill that the Senate had a "solemn responsibility" over the impeachment trial.