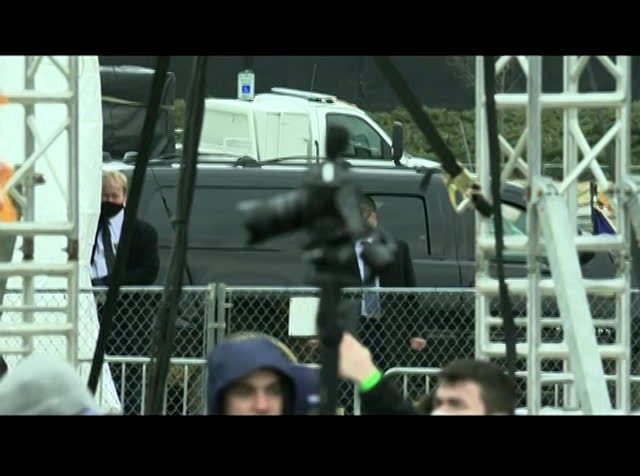 gathered for a joint session to count the electoral college votes. in some objections to some of the state both. me for a long day in congress . watch live coverage of the session on trend i see the senate when the first session on c-span2. now, rocks from a news conference from earlier today withsenate minority leader chuck schumer . >> good catch, when. there is rain. new york yankee want you. i doubt. okay. good morning everyone. what morning is. we sure did not take the most direct path to get here, here
1:15 pm 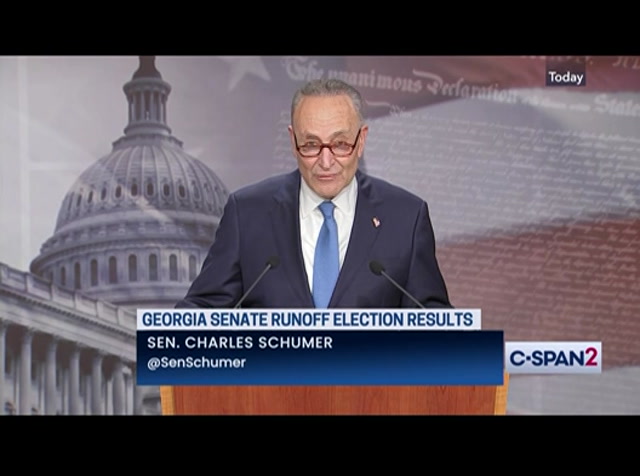 we are. what decide off? is a cell phone. as i said, we sure didn't take the most direct path to be your we are now here. here we are really feel like a brand-new day. the first time years, democrats will operate a majority in the united states . that will be regarded for the american people. america is experiencing one of the greatest crises we have ever had in our history. the senate democratic majority is made to delivering the bold change and help that other vendors need and demand. senate democrats know america is. help is on the way. and we have 2 new centers:. one of the first things i want to do with our new centers are seated is the
1:16 pm 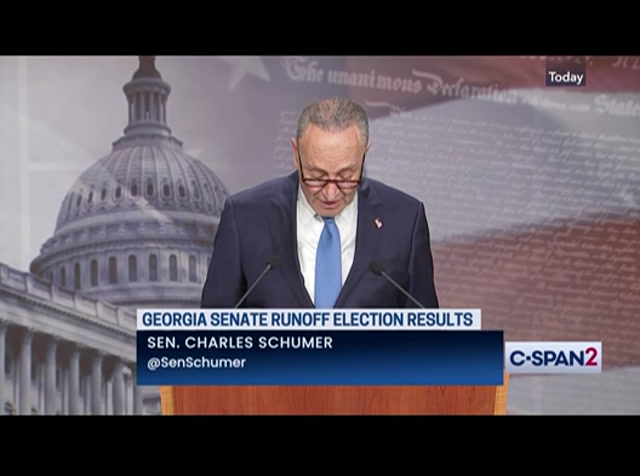 letter that our check to the american families. senators rafael warnock john also ran for three campaigns. they will beoutstanding senators . when rafael warnock was born, both of george's senators were africans and jon ossoff have it on the ground working for years. he was never gone, persistent . i'm so proud of both so excited, to welcome them to the united states senate. couldn't come moment. i also want to especially thank senator catherine cortez master anything chair. all the staff who work at the scc.
1:17 pm 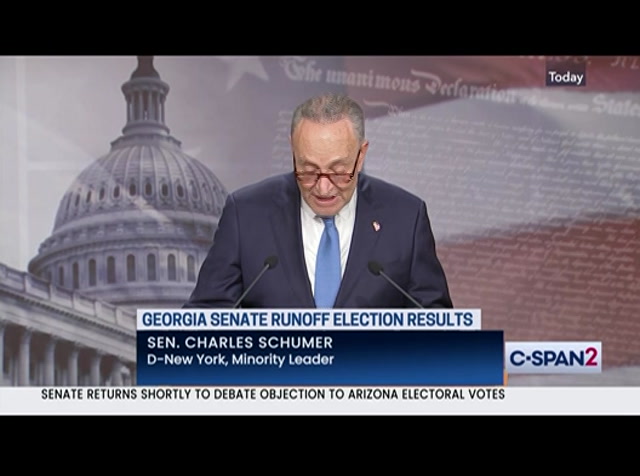 shot out to two members of the dsc c right after election day went down to georgia, spent their christmas and new year's holidays there is christy roberts. laura. for our patient director our political director. and a great shout out to my dear friend for over a decade stacy abrams team at fair fight georgia. for 10 years she has her team have so many of the women's group, black women's groups worked and worked and worked to change georgia. stacy would be the first to sellyou she didn't do it alone . a huge thank you to name organizations been working so hard or so years just to get this moment. and of course none of this would be possible without the hundreds of thousands of organizers, and volunteers who put their times, sweat and determination this
1:18 pm 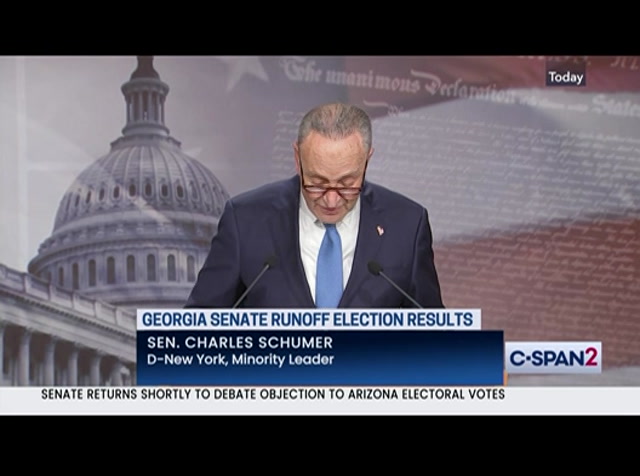 victory. organizing during a pandemic is not easy. but you all found a way let me say thank you. now i've already spoken to president by this morning ./ as majority leader, president biden and vice president terrace will have a partner in the office who is ready, willing to help achieve a forward-looking letter old change to. long, much-needed health stall by let set or president. that will change. he said, democratic house democratic president. one of the things i'm most excited about is that we have so much talent in our office all that is all.
1:19 pm 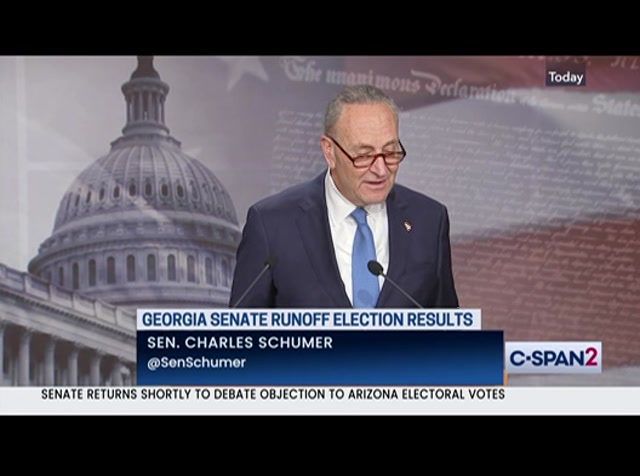 allow. legislation on the floor. now is all going to be, all that talent and balled up for so long will be released. see amazing things coming on ourshare . subcommittee chairs. they will be able to showcase their talents was great things. it excites me. ask office, we will work and every single day. toward the faith that the american people placed in us. thank you. i'm not going to take many questions because today is a very busy day you'll hear more from the floor later today as well over the coming days and months and weeks and years i'll take a question or two. [inaudible] there's tremendous thanks.
1:20 pm 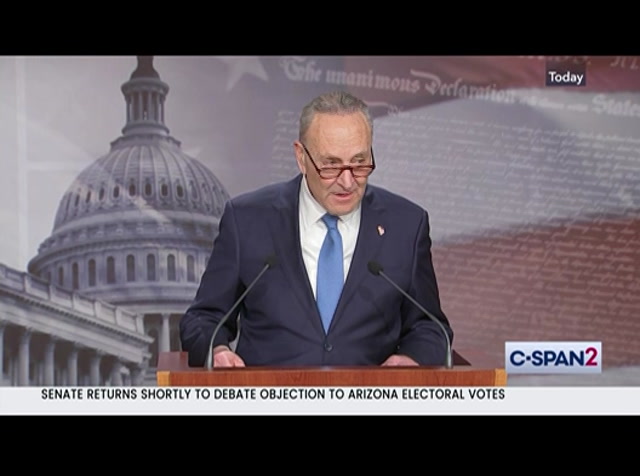 president from human. i see. look, i number one credit i give a is our content is an. wanted to help you. resident probe, the public and senators kept playing games . people want help. bold action. i think they realized democratic centers in georgia would join the democratic caucus that wanted to do it . [inaudible] i'm not going to get into -- i'm not going to get into either prioritizing moredetails . one of the first things we want to do was our new centers are seated, the campaign . >> last time there was a 50-50 set.
1:21 pm 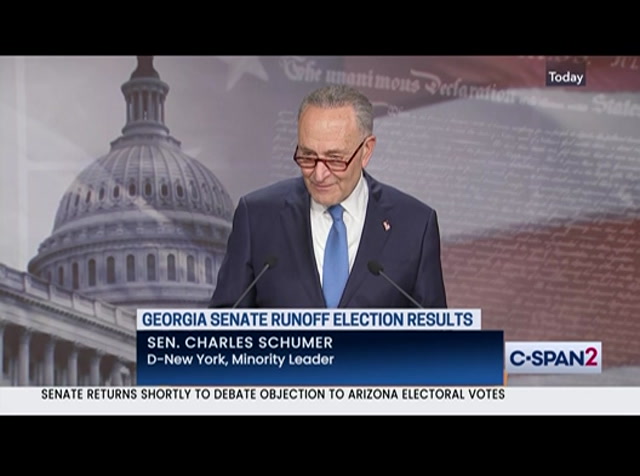 [inaudible] do you'll foreshadow that having you? >> i look forward to sitting down with leader mcconnell. we have a lot of things to discuss. we first have to wait until races are sort of new centers are here and vice president kamala is in the chair before we place but certainly we will have to talk . >> have you spoken with senator mcconnell yet? >> not this morning, no. [inaudible] as i told you is one of the first things we want to do. our georgia senatorscampaign, our caucus is strongly ported leaving the american people need . >> how does this change the wayforward on nomination ? >> obviously, with democratic control the ability of july
1:22 pm 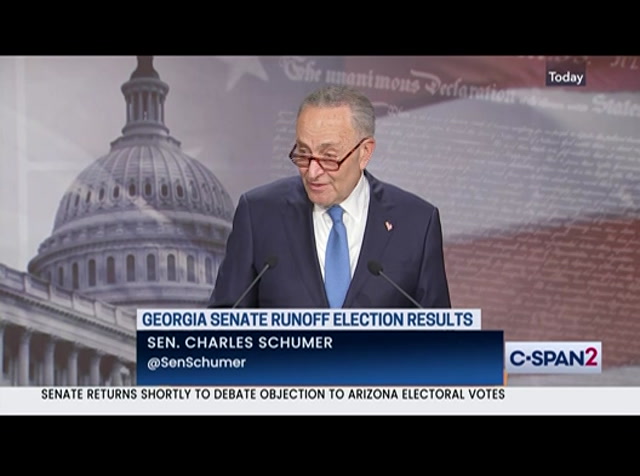 to move nominations forward will be easier. calendar ihave begun to look . last one . >> when you talk about you wouldbe the majority leader , progressives are really pushing you to eliminate the legislative filibuster. >> what we're going to do we know, we senate democrats know we faced one of the greatest crises americans have. where united and wantingbig bold change and were going to sit down as a caucus and discuss the best way to get that done . and the first question? yes, i was sitting at home in brooklyn, watching my television. and at about midnight, having talked to jon ossoff about three or four times rafael warnock three or four times i realized even though he was behind them by a couple thousand votes
left
right
Borrow Program
tv

Senate Majority Leader Chuck Schumer (D-NY) reacted to the Georgia Senate runoff election results and the potential of Democrats taking the majority in the Senate. He said one of the first things he wants to do is approve $2,000 stimulus checks for the American people.