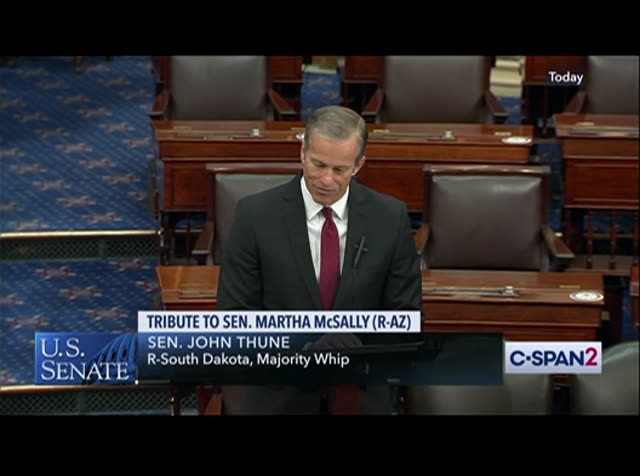 quote today represents a change in seasons for me and i don't yet have clarity on what my next position is. i do know is the author and finisher of my fate that he created each of us with purpose. president, i am confident that the author of our faith has more great missions in mind for martha: sally and i look forward to seeing her take them on. madam president, i yield the floor. >> now madam president everywhere you look there are signs our country needs emergency federal relief before the end of the year. bases, hospitalizations, deaths are rising . covid restrictions are snapping back into place in cities across the country . congress is warning of a double that recession if congress fails to pass another round of school stimulus. the situation is really quite simple.
1:27 pm 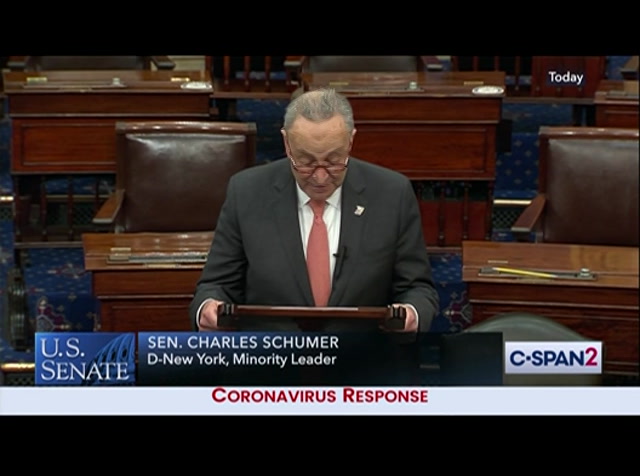 there are glaring needs in the country and we will need to work across party lines to pass legislation to meet those needs. let me say it again, we need both parties to sit down and compromise on legislation to help the american people. at the only way to get legislation passed but observance of this process seems to have lost track of this simple truth. the republican leader seems to have forgotten aboutit entirely . amazingly, it's been over eight months since congress came together to pass the it care that and rthe disposition has not much.the majority leader continues to insist that the senate accept one of his partisan rubble proposals , each one of which has been sorely inadequate and each of which has contained poison pills designed to ensure the bill'sfailure . the most conspicuous of these poison pills is the so-called red line the majority leader
1:28 pm 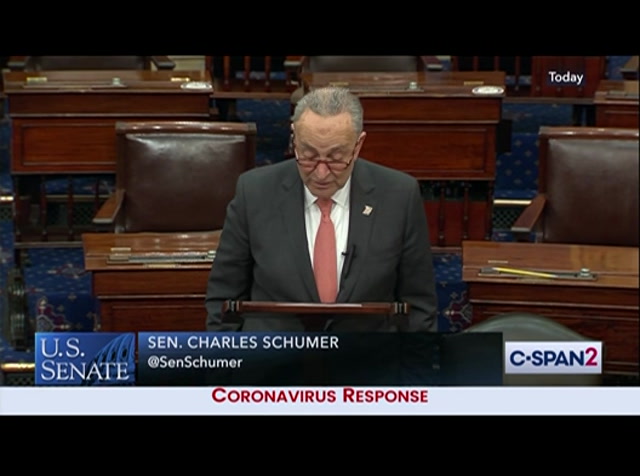 has tried to draw on the issue of corporate immunity. contrary to the majority leaders projections there's od been no flood of covid lawsuits. quite the opposite area almost a year into this pandemic 16 million americans affected, 285,000 lives were lost. there have only been 111 covid related losses filed during conditions of employment, 23 suits for personal injury from exposure to the coronavirus in a public place and 11 covid related medical malpractice suits really far from a pandemic of lawsuits there's barely been a trickle and yet the republican leader continues to prevent americans from getting the aid they so desperately need and deserve until he gets this piece of partisan ideological legislation. again yesterday the leader
1:29 pm 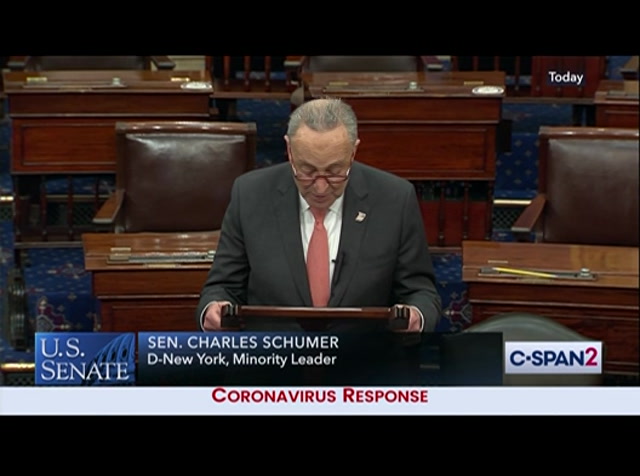 was busy accusing democrats of blocking bipartisan legislation quote, everyone agrees on, his words . other members of the republican leadership were making it clear leader mcconnell continues to insist on this particular poison pill. the republican with said any relief corporate immunity that quote, satisfies senator at mcconnell. imagine holding emergency a hostage, help for the unemployed, help for small businesses, help to pay salaries, helpfor individual americans, with thevaccine . in order to give corporations legal immunity .has been the republican position the past eight months and it is a leaders position today. for the sake of bipartisan negotiations, republican leadership should forsake these hard-line positions. you can't claim to want bipartisanship while actively
1:30 pm 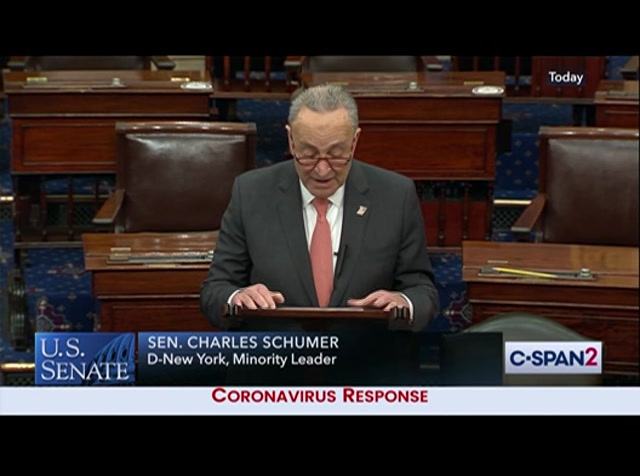 demanding the senate accept partisan legislation. bipartisan does not mean democrats must agree to whatever the republicanleader wants on whatever issue he picks . bipartisan means both sides, both sides sitting down, finding an agreement to meet the needs of the country and make the law. that process is happening to the gang of eight. itshould continue until we get a solution . on the fcc. the senate will also vote on the nomination of nathan symington, a republican nominee to the fcc area normally these nominations to independent boards repair, one democrat, one republican to keep balance on the board but here in the waning days of a lame-duck presidency republican majority is rushing to approve a single republican nominee . a nominee himself that far
1:31 pm

from uncontroversial. mister simon's key qualification seems to be a support president trumps desire to change section 230 , a law that regulates speech. in fact it appears he severely misled senators on the commerce committee and he told them while working for a federal aid he played only an administrative role in his petition for the repeal of section 230. it turns out mister simonton of not only pushing the petition himself, he was actively lobbying fox news to support it for political reasons. i strongly urge my colleagues on both sides of the eye to reject mister simonton's nomination to the fcc. and finally madam speaker, madam president , as we approach the end of the senate session, i have the unhappy task of bidding farewell to senators who will be concluding their time in thischamber . within an hour our dear
1:32 pm 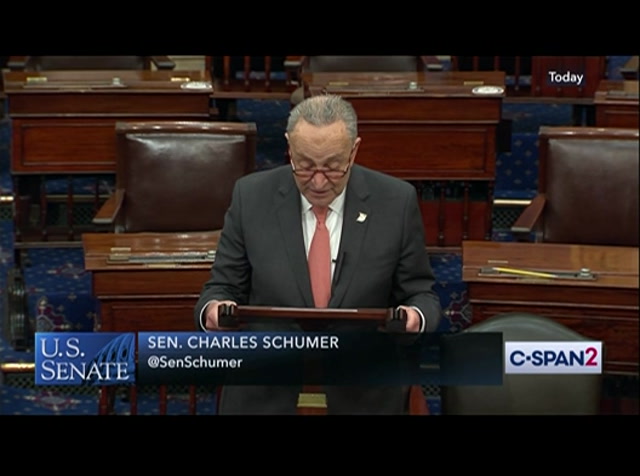 friend and dear colleague senator tom udall of new mexico will give his final speech on the senate senate floor. for the past years senator has conducted work with legislatures senators udall caliber, someone who possesses a massive public policy and is principle. you'll always know where senator udall stands on an issue but you always know he's willing to sit with you and work with you until you find common ground. and because of these qualities, tom will leave this chamberas a supremely accomplished legislator . here's defender of the environment and a true champion of the american west . now a lot of politicians are described as wonder kinds, but getting elected at a young age. but should be hard-pressed to find someone got their start in politics earlier than tom. he made his debut at the plucky age of five, boosting
1:33 pm 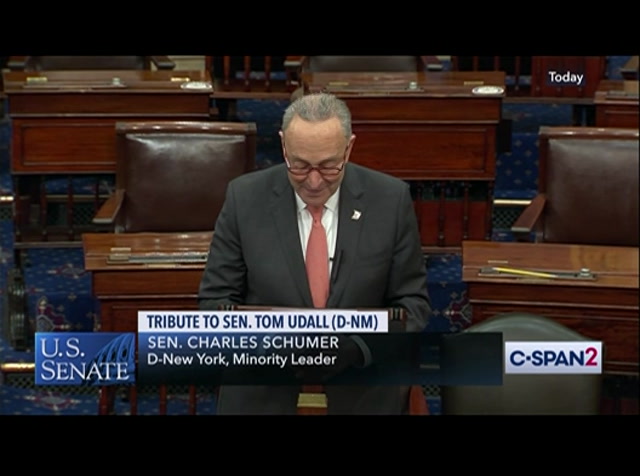 campaign signs from the back of his family's convertible during his dad'sbid for congress . a service runs deep in the veins of the udall is, it might be called the staff of the udall family tree. alongside his father he looked up to his uncle know who succeeded his father as one of his generations great environmental advocates. , the senate ago will featured 2 udall's, tom and cousin mark. even now are coming from utah senator lee is a second cousin from the udall clan. ultimately it was tom's dad who taught him a lifelong love of political process. during the years stuart udall served as interior secretary tom would watch from the living room as his dad sat at the dinner table surrounded by democrats and republicans alike, both signed at dinner . those memories left a mark
1:34 pm 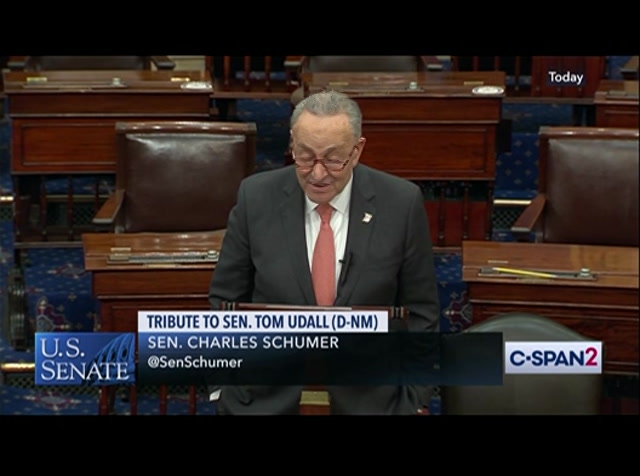 and tom would spend his time in congress trying to do much the same . i work with senator vedder led to one of his greatest accomplishments in office, the first major toxic substances control act in 40 years. at the time it was the most significant environmental law passed in 20 years. tom also had become one of the senate leading authorities on final policy, sponsoring over a quarter of the bills that passed through the indian affairs committee on their way tobeing signed into law . legislation to improve tribal access to affordable healthcare and running to support native american language preservation programs and support native american entrepreneurs all bearing the udall standand when it comes to protecting our environment , no one commands greater respect and the senior center from new mexico. tom helped increase funding to the department of the
1:35 pm 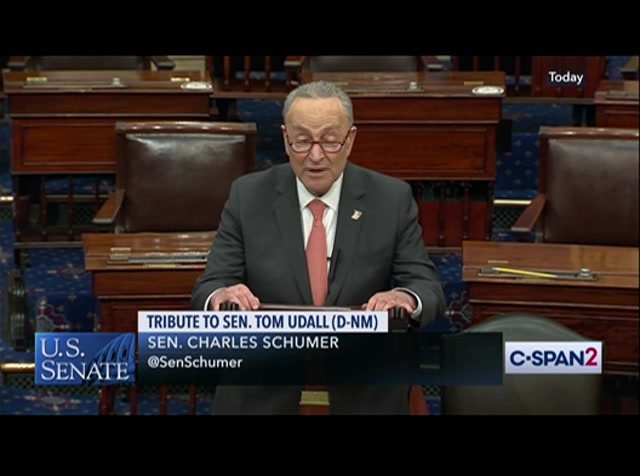 interior by 25 percent . including billions to protect our national parks and expand our wildlife preserves. he sponsored the great american outdoor act and secured permanent funding for the land and water conservation fund , a fund that helped establish over 40 years ago . one of tom's favorite authors once wrote something will have gone out of us as a people if we ever let the remaining wilderness be destroyed. we simply need that wild country available to us even if we never do more than arrive to it and look in. tom did a whole lot more than looking area be preserved, he can serve, he extended the great american wilderness for generations hence . these highlights, impressive as they are only are the tip of the iceberg. or is 12 years in office tom's legislative accompaniments ran again consumer protection, climate change, the protection of tribal nations and most
1:36 pm 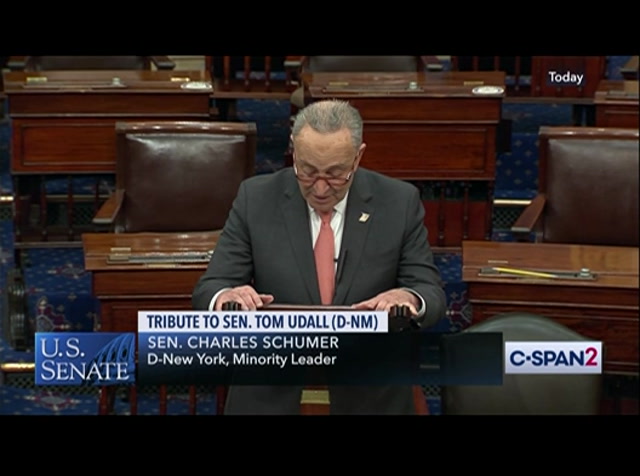 recently, a principled stand against the current administration's attempts to rollback critical environmental protections and through it all, tom has been unendingly civil and kind. he had the friendships, real friendships, long-lasting wrenches across the eye. he preserved, he preferred to solve problems no matter who getsthe credit . sometimes resisting the urge to make a splash in public. tom is as down-to-earth as they come. there's just no artifice about he's a decent senator and is a man you couldn'tfind any better . other senators will attest to these qualities unsure. will staff. attribute that's perhapseven greater . and respect and loyalty senator udall commands from those who work for him day in and day out isextraordinary .
1:37 pm 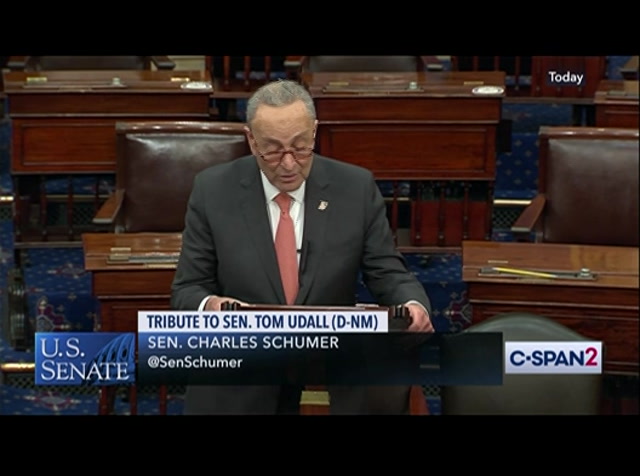 we don't know when udall will next raise the halls with their presence but i do know this: the country is need more leaders like tom. editor udall once said his father and uncle were lifelong rolloff because they have the rightmix of inspiration and perspiration . he said quote, they were both visionaries but also doers. i can think of no better description for tom udall himself had a visionary but also a doer. tom, as you move on to your next chapter in your life i wish you and jill the very best of luck. i yield the floor. >> senator from new mexico. >> iq for the recognition and now i ask unanimous consent the following members of my staff lauren areas, clinton powell and renc casper, sarah gilbert
left
right
Borrow Program
tv

Senate Minority Leader Schumer spoke about the federal coronavirus response and urged his colleagues to not vote for Nathan Simington to become a member of the FCC. Also, he paid tribute to Senator Tom Udall.