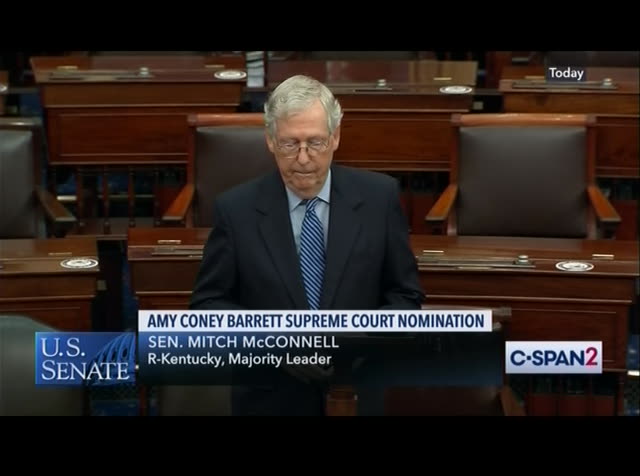 so the parts of the elite american in the left have about and then to see their fellow citizens it will take more than victim blaming because they got out of bed. they could start this week they could start today. credents and qualifications, and they could stop gawking at deeply religious americans like they have encountered extraterrestrial life or bought a ticket for a of great importance to america, the nomination of judge amy coney barrett to the supreme court has thrust the issue of health care back into the spotlight.
2:01 am 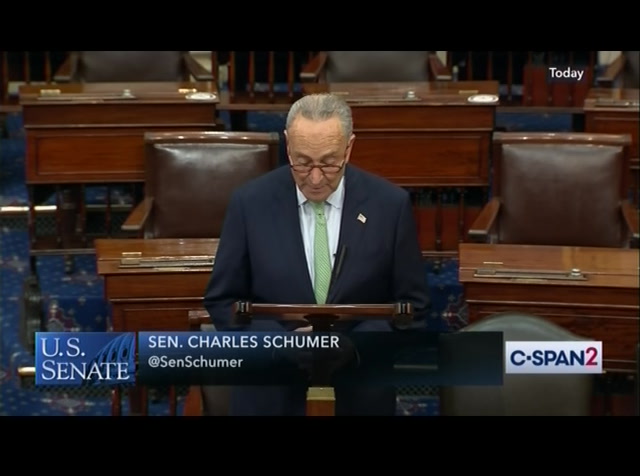 her confirmation to the highest court in the land could put health care for hundreds of millions of americans at risk. as you'd imagine, taking away health care is deeply unpopular with the american people. so it seems the strategy from the republican majority is to invent some new distraction of fresh outrage to talk about. my colleagues on the other side would rather talk about anything besides the fact that their president, their party, and their supreme court nominee poses a dire threat to americans' health care. today, the outrage from the republican leader was directed once again at the idea that democrats would attack the nominee's religious beliefs. but, of course, in their zeal to manufacture this issue, republican senators began telegraphing this line of attack even before a nominee had been named.
2:02 am 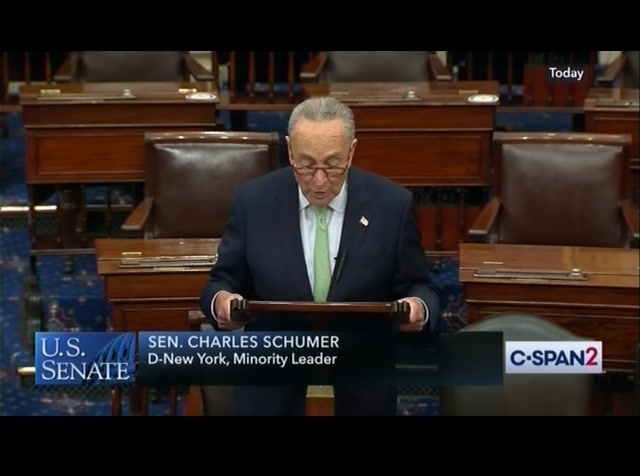 one republican senator wrote me a letter to warn against anti-catholic attacks that happened yet against a nominee who hadn't been named. that's how transparent this republican diversion, ruse is. it appears that the republican majority will crank up the outrage machine to any level of absurdity to avoid talking about america's health care reform, the health care reform -- health care, the health care so many americans desperately want and need. in fact, all week the republican leader has mocked the idea that a far-right supreme court majority might strike down the affordable care act and that judge barrett might play a decisive role. of course, president trump nominated -- promised to nominate supreme court justices who would terminate the affordable care act, and he picked judge barrett. that's the president's words. he's only going to pick justices
2:03 am 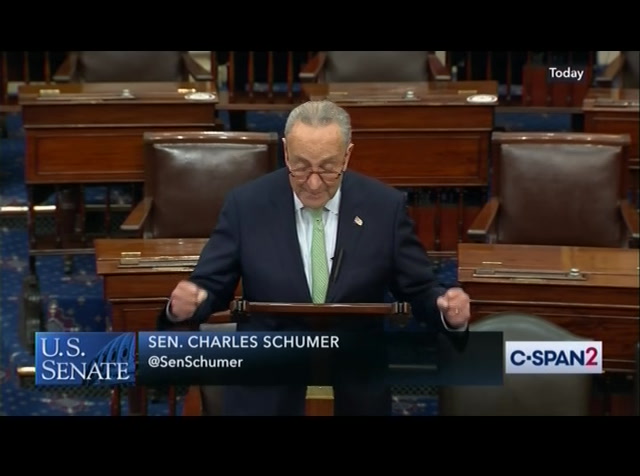 that would terminate the affordable care act. and it's no mystery why he picked judge barrett. in both major cases brought before the a.c.a. -- sorry, in both major cases brought against the a.c.a., judge barrett twice sided against the law. she publicly criticized justice roberts for upholding the law and said that if the supreme court read the statute the way she does, they would have to, quote, invalidate it. president trump, terminate it. judge barrett, invalidate it. guess what? president trump and republican attorneys general are in court right now suing to do just that, invalidate our health care law in a case that will be heard one week -- one week -- after the election. the threat to americans' health care is very, very real. and senate republicans are tying
2:04 am 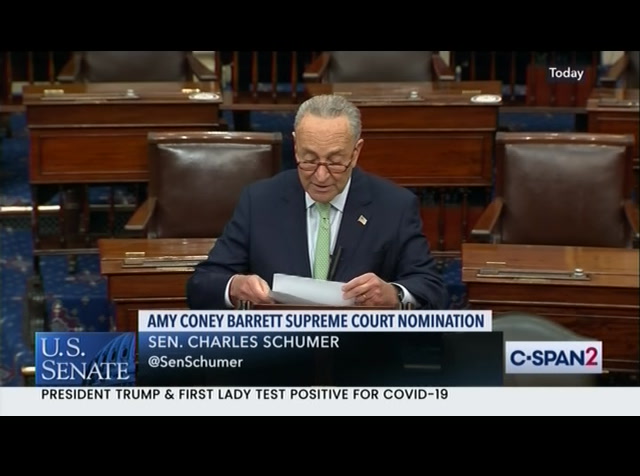 themselves in knots in trying to explain how it's not. leader mcconnell from the floor of the senate called it a joke -- a joke -- that judge barrett and a far-right majority of the court might vote to take away health care or turn back the clock on women's rights. maybe he didn't get that message around to his conference because the republican senator from utah only a few days earlier claimed that the affordable care act was unconstitutional. and that striking it down shouldn't tarnish judge barrett, if that's what she chooses to do. another republican senator said he wanted to see evidence that the nominee understood that roe was wrongly decided, that roe was an act of judicial imperialism. and i do believe amy coney barrett's record bears that out. that's his quote. the junior senator from missouri expressed confidence that roe v.
2:05 am 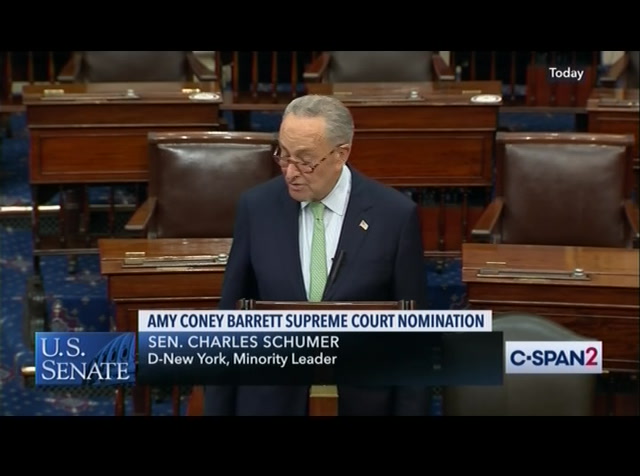 wade was wrongly decided. on the supreme court, justice barrett could enforce that view. so which is it, republican leader? is it absurd to think that judge barrett might strike down the affordable care act or super-it a good thing that -- or is it a good thing that shouldn't tarnish her reputation? is it a jo he can that judge barrett could curtail women's fundamental rights or are republican leaders relieved to think that so that thinks roe v. wade is judicial imperialism? americans are starting to get pretty sick of these double standards and mealy mouth talking points. pretty sick of politicians who just four years ago declared they couldn't possibly confirm a democratic nominee to the supreme court in the early months of an election year but are now rushing to confirm a republican nominee in the middle of an election that's already under way. and, most of all, pretty sick of republicans claiming that they support protections for
2:06 am 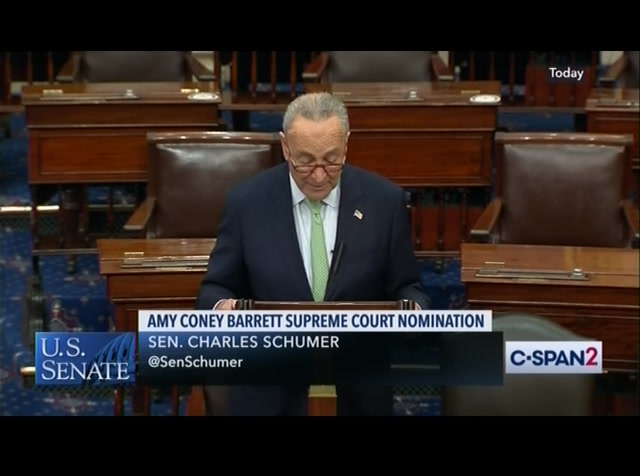 americans with preexisting conditions while at the same time supporting a lawsuit that would eliminate them. well, we're about to put a few of these senate republicans on the record. soon the senate will vote on a bill that, if passed, would protect the health care of hundreds of millions of americans and prevent efforts by the department of justice to advocate that courts strike down the affordable care act. i was able to move this measure to the floor, despite the fact that republicans didn't want it, and now we'll have a vote. will republican senators vote to stop president trump's justice department from spending taxpayer dollars trying to eliminate the taxpayers' health care? we will see very shortly.
2:07 am 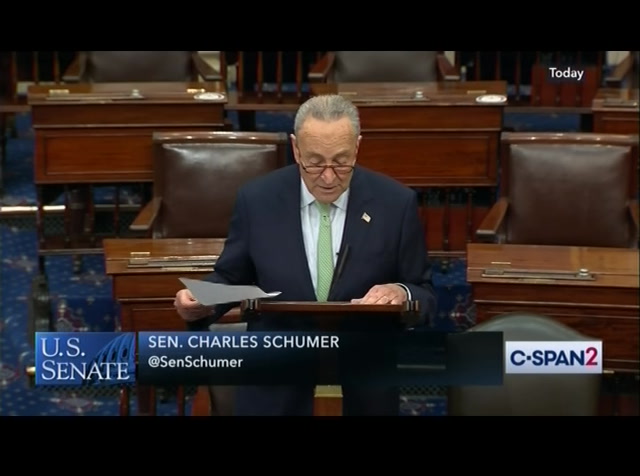 if senators truly want to support protections for americans with preexisting conditions, they'd rote to damage president trump's -- they'd vote to damage president trump's effort to damage them. it's as simple as that. yes or no. i ask unanimous consent i be given a chance to finish my remarks in the next few minutes. the presiding officer: without objection. mr. schumer: thank you, madam president. it's as simple as that. are they with the people who want protection or not? are they standing with president trump who wants to destroy it? it is that simple. because if the president -- if president trump and the republican lawsuit is successful, every single american stands to lose vital health care protections or access to care. millions of americans would see drug costs skyrocket. tens of millions of families would lose health care coverage during the worst health crisis
2:08 am 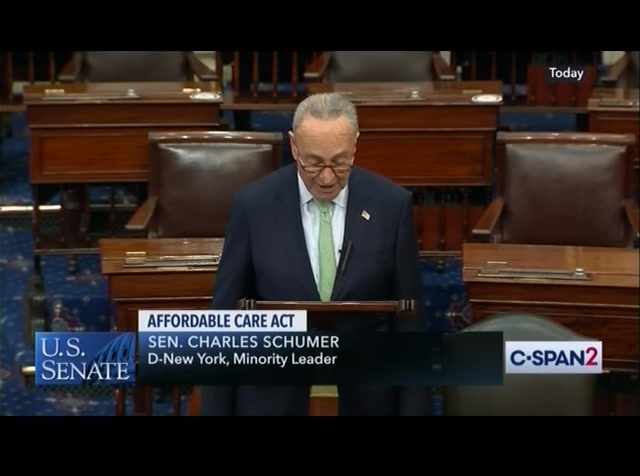 in a century. more than 130 million americans with preexisting conditions would lose vital protections, including every american who contacted -- who contracted covid. which would be treated as a preexisting condition. women would see their country hurdle backward at a time when they could be charged more than men for insurance simply because they were women. this vote, which i was fortunate enough to obtain, will show america which party stands with protecting americans' health care and protections for preexisting conditions and which party opposes it. it's plain and simple. are you with leader mcconnell who wants to rip away people's protections? are you with president trump who wants to ruin our american health care by eliminating a.c.a.? or are you with the american people who desperately need
2:09 am 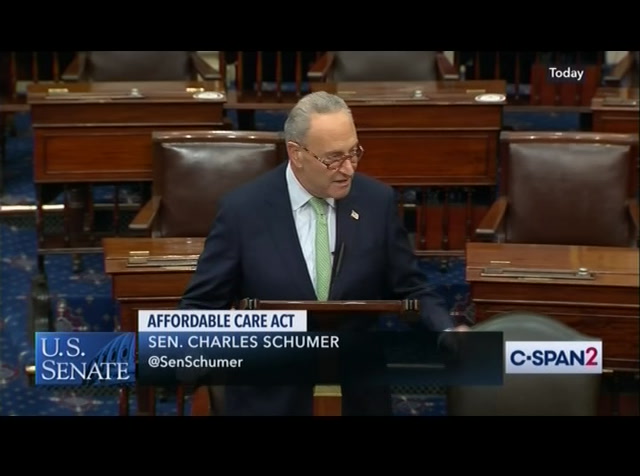 these protections? are you with the mother or father whose son or daughter has cancer and the insurance company says you're not getting any insurance or you're going to require that company to give them the insurance that family so desperately needs. the eyes of america are on this body and on republican senators right now. whose side are you on? president trump's or the american people who want health care? i
2:10 am 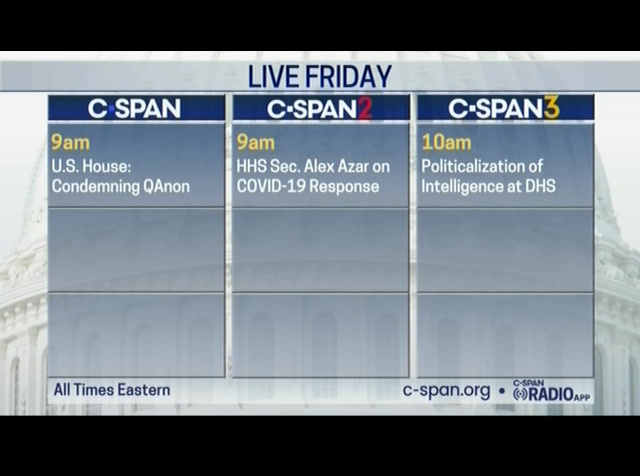 Senate Democratic Leader Charles Schumer said the nomination of Judge Amy Coney Barrett is tied to the future of the Affordable Care Act and whether pre-existing conditions protections will continue in the U.S.