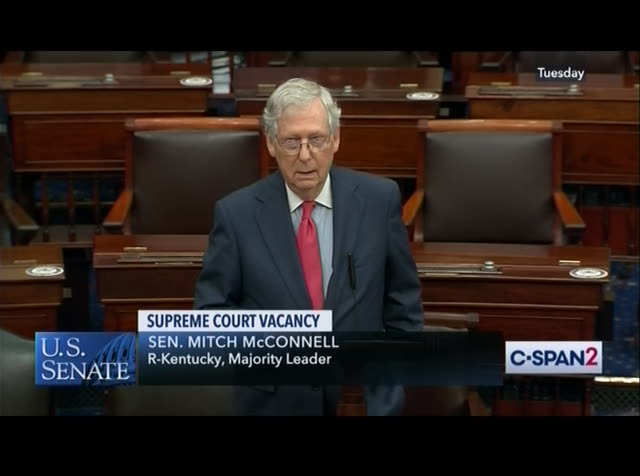 there is no religious test for public office. in this country, our country, we have the right to seek the protection of the courts when our free exercise of religion is threatened. that is why we need judges like judge barrett who understand our laws and constitution and will uphold our freedoms accordingly. if the reflexive opponents of judge barrett's nomination want to argue otherwise, they will only be proving how much better she understands our constitution than they did.d with. the presiding officer: without objection. mr. schumer: well, thank you, mr. president. now, after senate republicans established the principle that the senate shouldn't consider supreme court nominations in
4:40 am 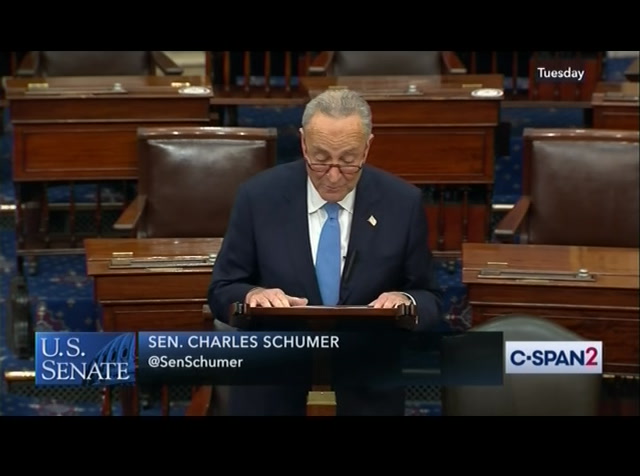 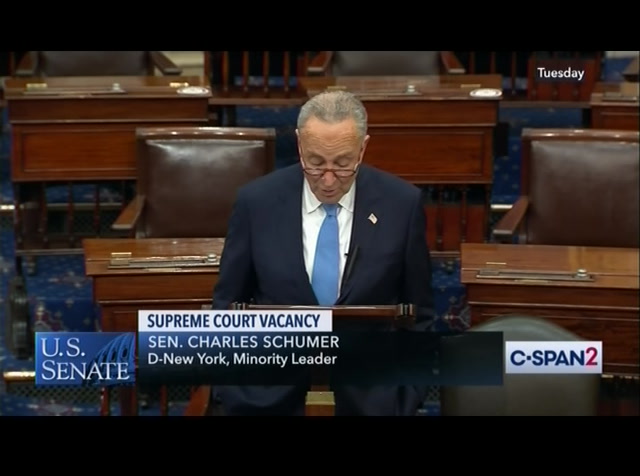 would have, quote, have had to invalidate, unquote, the entire health care law. let me repeat that. judge barrett strongly criticized justice roberts' decision to uphold the affordable care act, saying that he, quote, pushed the law beyond its plausible meaning to save the statute, unquote. if justice roberts had read the law the way judge barrett does, the supreme court would have had to invalidate the entire affordable care act. the republican lawsuit against the affordable care act, as everyone knows, will be heard one week after the election. senate republicans are rushing to jam judge barrett's confirmation through in time for her to hear arguments in that very case. not one for subtlety, president trump tweeted on saturday that our health care law will be replaced, quote, if terminated by the supreme court.
4:42 am 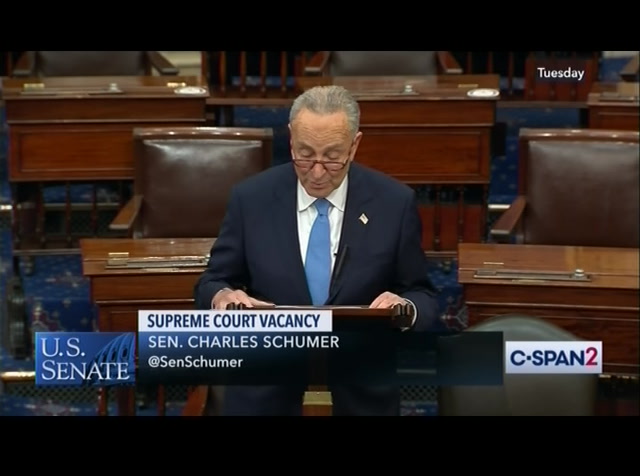 so the american people should make no mistake. any vote -- a vote by any senator for judge amy coney barrett is a vote to strike down the affordable care act and eliminate protections for millions of americans with preexisting conditions. judge barrett's record also suggests that if she is confirmed, the reproductive freedom of millions of women would be in grave danger. should judge amy coney barrett be confirmed, a far-right majority on the court could turn back the clock on women's rights and a woman's right to choose. workers' rights, voting rights, civil rights, environmental protections, lgbtq rights, and more. the future for daca recipients hangs in the balance as well. so this nomination concerns no less than the fundamental rights of the american people. after holding a supreme court
4:43 am 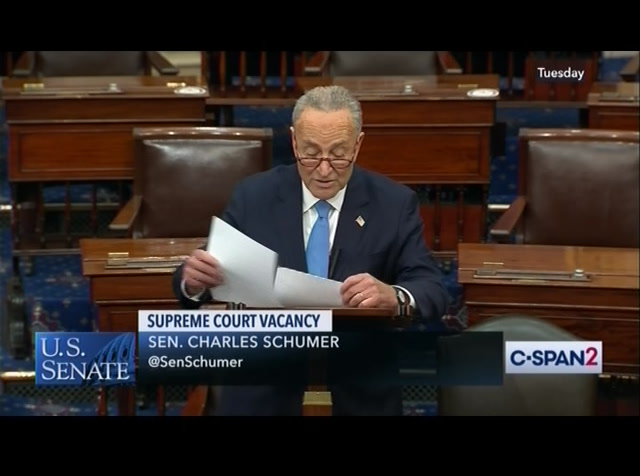 vacancy open for eight months before a presidential election, president trump and leader mcconnell are doing what no senate has done before. shamelessly rushing to fill justice ginsburg's seat less than 40 days before a presidential election. justice ginsburg's dying wish was that she not be replaced until a new president is installed. republicans are poised not only to ignore her wishes but to replace her with someone who could tear down everything she has built. this reprehensible power grab is a cynical attack on the legitimacy of the court, and i will strongly, strongly, strongly oppose this nomination. the senate republican majority has decided, however, that they will stop at nothing, break all the rules, even their own rules to rush this nomination through before the election. but apparently the senate majority isn't going to stop at
4:44 am 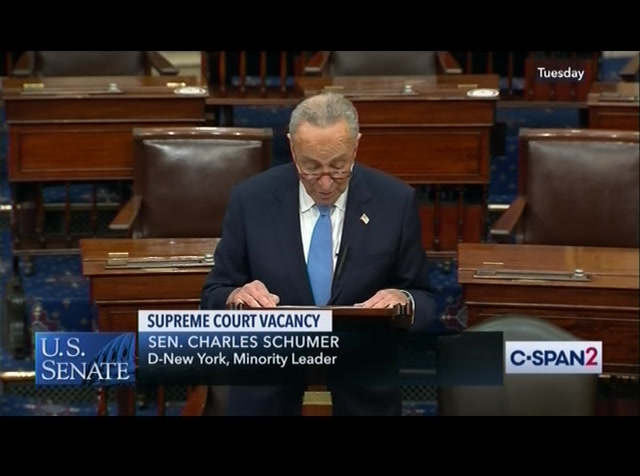 naked hypocrisy. it's also going to engage in manufactured hysterics. for the past few weeks, long before president trump even nominated judge barrett, senate democrats -- senate republicans have been telling everyone who will listen that democrats better not make catholicism an issue in this nomination. that's their quote. last week, a member of this chamber took time to write me an entire letter preemptively warning about anticatholic -- anti-catholic attacks against a nominee who hadn't been named yet. another member of this chamber said, quote, in chuck schumer's america, only atheists can be supreme court justices, unquote. of course, not a single democrat will make these attacks or make personal religious beliefs an issue. but that doesn't matter to my republican friends. oh, no. they will try to slander democrats with this imaginary issue anyway because they are desperate for a distracks. republicans invented this
4:45 am 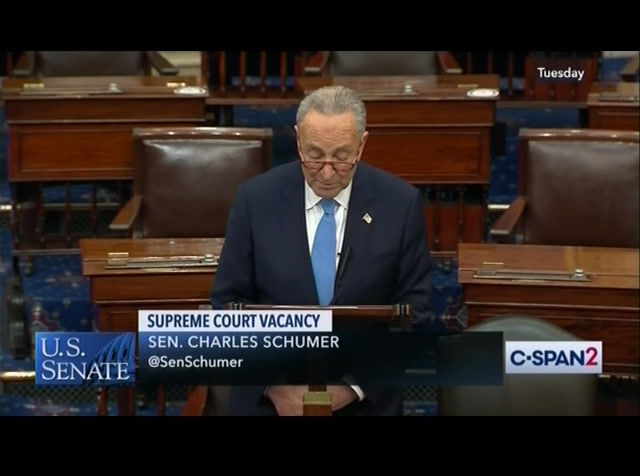 concern because they are so eager to make this nomination about anything other than their disgraceful double standard, anything beside their attempts to take away health care and curtail the fundamental rights of the american people. honestly, it's embarrassing, embarrassing how transparent republicans are being about this manufactured line of attack. they couldn't even wait for a catholic nominee to be chosen. they already stripted the attacks. the senator from tennessee is making wild allegations. the senator from missouri is writing ridiculous letters. my friend from florida is cutting videos decrying the kind of attacks on a person's faith that haven't occurred since the political right was implying that our last practicing christian president, president obama, was a secret muslim. spare us the sanctimony. i don't remember my republican colleagues making a fuss when peaceful protesters were
4:46 am 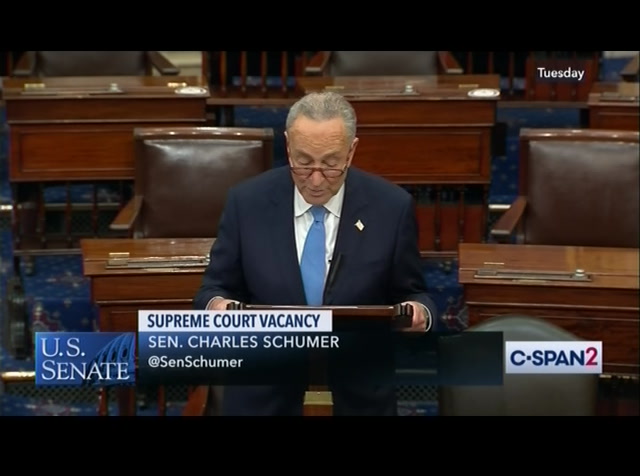 tear-gassed so president trump could hold a bible upside down in front of a church for a photo op. look, i understand why certain republicans are resorting to this disgusting tactic. they have no other argument. they can't argue that this nomination must proceed because of some solemn constitutional duty because they argued the exact opposite position four years ago. and they certainly can't argue the merits of judge barrett's position on the affordable care act because they know it's dreadfully unpopular with the american people. no wonder, no wonder republicans are so desperate to talk about literally anything else. on another matter, covid-19. yesterday, the house of representatives unveiled legislation to provide $2.2 trillion in emergency funding to help the american people in the fight against covid-19. the proposal includes a number of crucial provisions that families, businesses, local leaders, and hospitals desperate
4:47 am 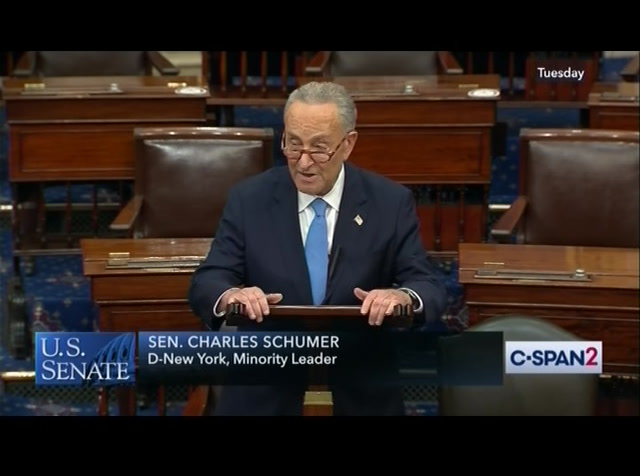 ly need, including $600 in weekly emergency unemployment insurance, funding for our schools, support for state and local governments, assistance for renters and homeowners, additional resources for testing and contact tracing, and measures to strengthen the post office and complete the census. it includes important aid for transit systems, aid vital to our nation's economy. it includes crucial support for economic drivers like restaurants, music venues, independent theaters, and more that we have named in our save the stages act -- save our stages act. it includes critical workplace standards and protections for our workers. is this new bill everything that democrats want? no. but it's an honest attempt to provide the relief our country needs and reach an agreement by moving closer to our republican colleagues who want to provide much less relief if they want to provide any at all. once again, the bill
4:48 am 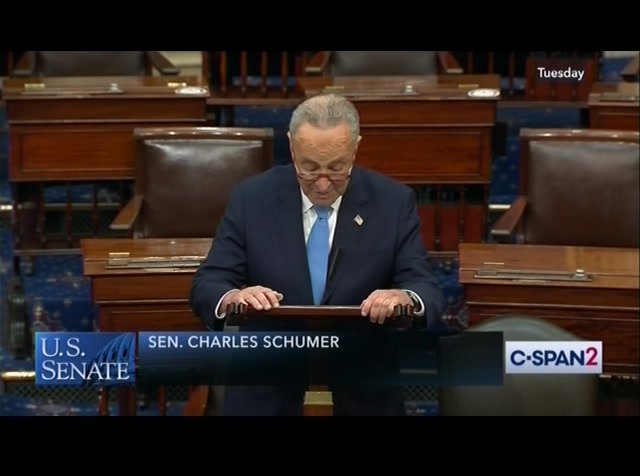 demonstrates the willingness on the part of democrats to compromise. covid-19 remains the number one issue in america. weekly unemployment claims are still through the roof. schools are struggling to adapt. over 200,000 americans have died. we are a long way from putting this crisis in the rearview mirror. but none of this seems to concern the republican majority in the senate. as countless businesses are going under, as thousands continue to get sick, as millions of americans are waiting for the senate to do its job, leader mcconnell and senate republicans are moving at a lightning pace to jam through a supreme court nominee. a nominee that could rip health care away from tens of millions of americans in the middle of a pandemic. leader mcconnell chose to put the senate on pause for four months while covid-19 devastated our country. now leader mcconnell has the senate on fast forward to rush
4:49 am 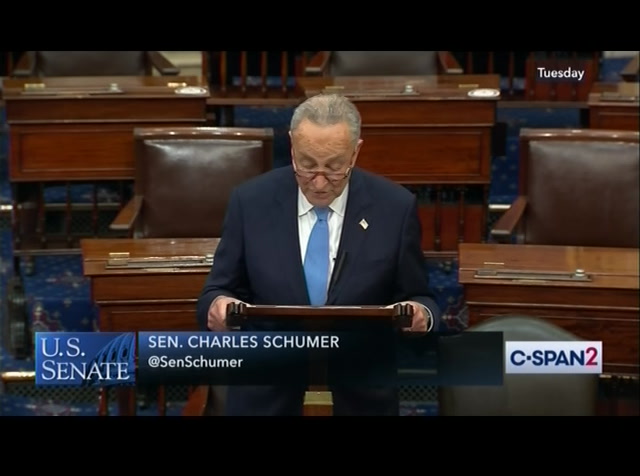 through a partisan nomination to the supreme court. goes to show you the priorities on the other side of the aisle. one final matter, over the weekend "the new york times" reported president trump paid in income taxes in 2016 and nothing in 10 of the prior 15 years largely because he reported losing more money than he made. no new yorker was at all surprised by this report. all the hallmarks of president trump's career before and after politics are there. hyperbole, fraud, avoiding responsibility, pursuing selfish interests above all else. that's interrupt in a nut -- that's president trump in a nutshell. the documents obtained by "new york times" show a long history of president trump's egregious tax avoidance and potentially criminal activity and including the astounding figure that the president owes nearly $500
4:50 am 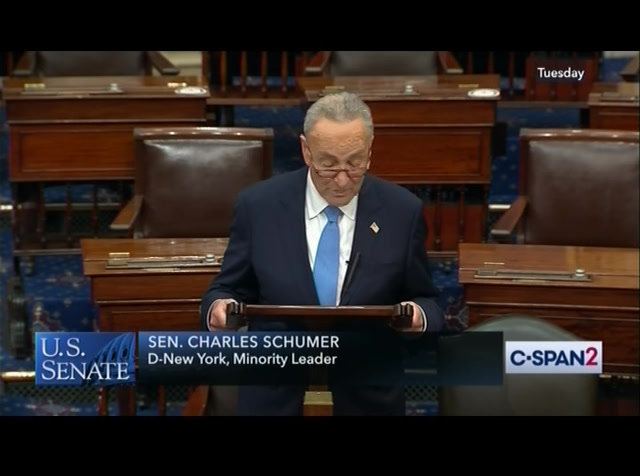 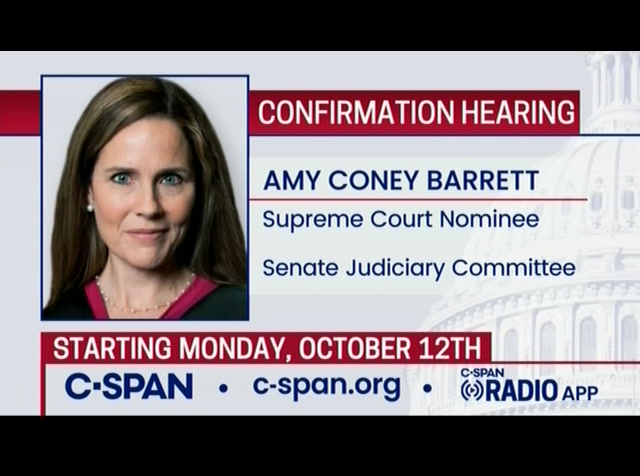 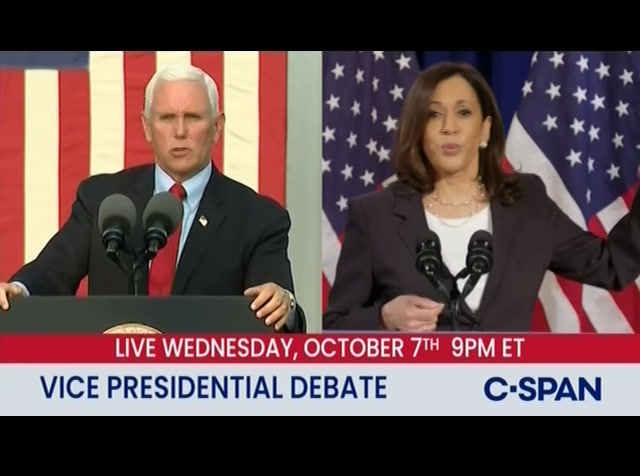 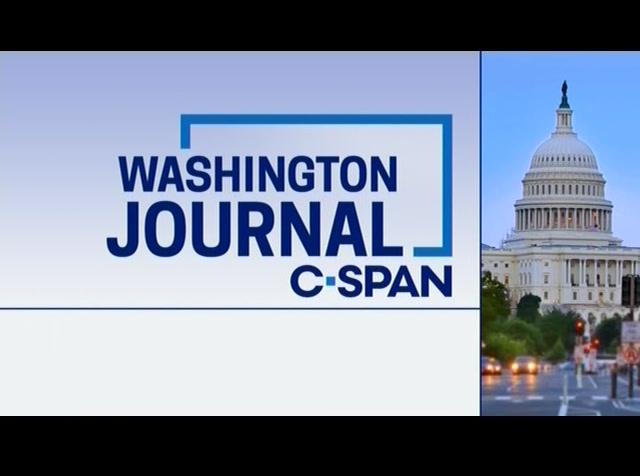 Senate Minority Leader Schumer says a vote for President Trump's Supreme Court nominee Judge Amy Coney Barrett is a vote against the Affordable Care Act. He also spoke about the coronavirus response by the Trump administration.