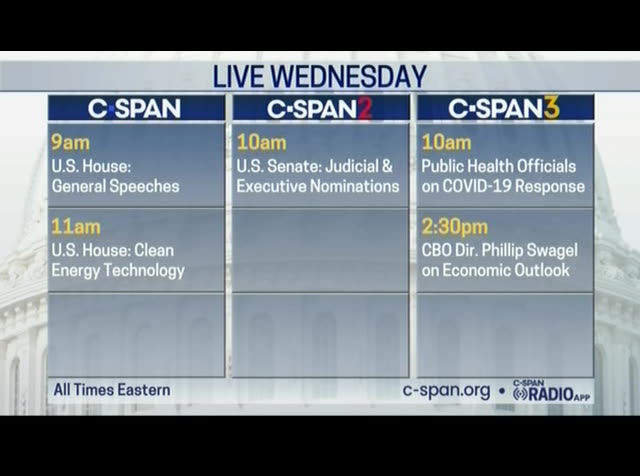 ambassador to the u.n. >> i turned the floor to the distinguished representative of the united states to deliver an address by the head of state. >> on this 75th anniversary of the united nations, i have the awesome honor of introducing today someone who has taken to heart the core principles that this international organization
4:43 am 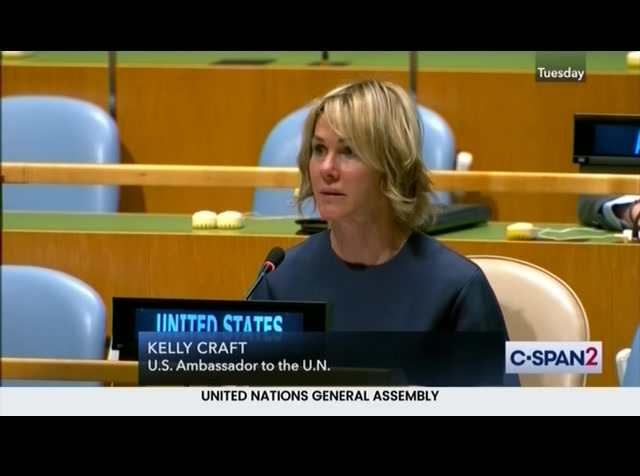 was founded upon, peace. on september 15, we witnessed the results of president trump's vision and perseverance which brought israel, the united emirates and bahrain to sign the abraham accords that peace innew era for the middle east. this offers the region and its people the first new hope for peace in a generation and the united states invites the palestinians to seize this opportunity to engage in that spirit. earlier this month, president trump also brokered economic andalization between serbia kosovo, a breakthrough towards reconciliation for the people in the balkans, a region that has suffered too much bloodshed. on north korea, the president's fearless vision has shown remarkable progress. president trump is the first american president to meet with north korea's leaders.
4:44 am 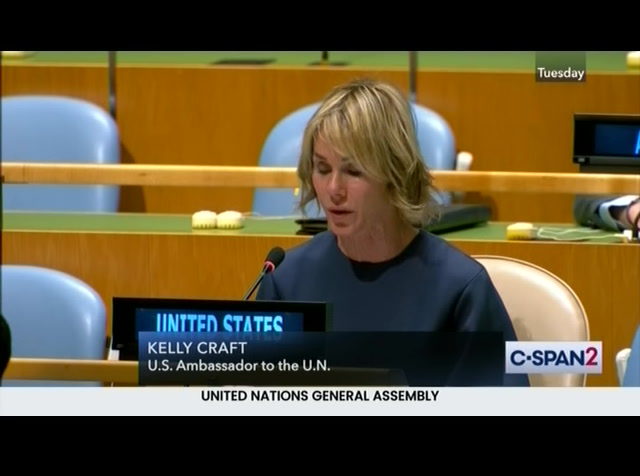 americans held captive have come home. there have been no new nuclear initial --ong-range missile tests, a dramatic lowering of the temperature in the region and opening for a lasting agreement that brings peace to the peninsula. it is clear that when president trump speaks, world leaders listen closely. in 2018, president trump used the power of his voice to warn the assad regime and its russian and iranian partners to halt plans to attack idlib province, a warning they wisely heeded and which spared millions of syrians from the risk of death and injury. as i sit before you today, the u.s. brokered peace talks between the parties in afghanistan are under way. women now occupy positions
4:45 am 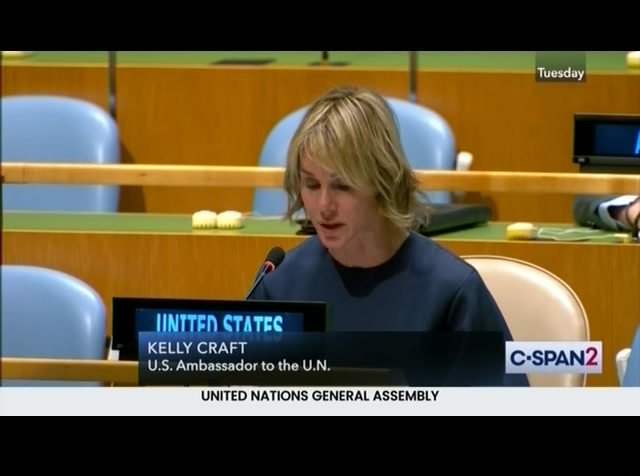 within the afghan peace process and president trump is convinced there is a clear relationship between women in position of authority and a brighter and more peaceful future for the afghan people. yet again, the president has shown the fortitude necessary to bring together long-standing adversaries to work towards sustainable peace. through his bold leadership, grit, dogged determination and unmatched ability to break through the status quo and make a deal, president donald j trump has delivered on the promises that he made to the american people and the world is more peaceful as a result. mr. president, mr. secretary general, distinguished delegates, fellow ambassadors and world leaders, my commander in chief and president of the united states of america, donald j. trump.
4:46 am 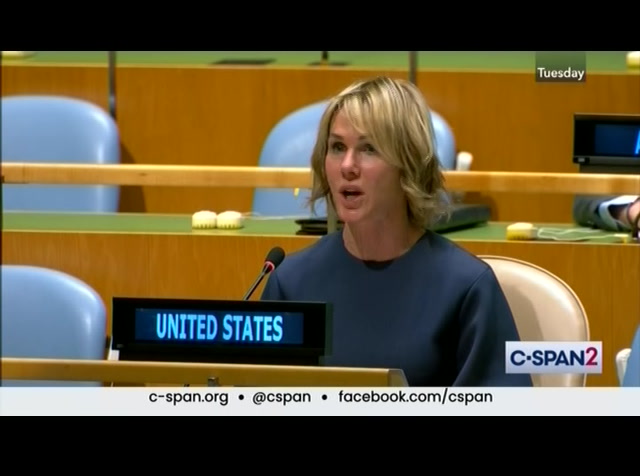 thank you. president trump: it is my honor to address the united nations general assembly. 75 years after the end of world war ii and founding of the united nations, we are engaged in a great global struggle. we have waged a fierce battle against the invisible enemy, the china virus, which has claimed countless lives in 188 countries. in the united states, we launched the most aggressive mobilization since the second world war. we rapidly produced a supply of ventilators creating a surplus that allowed us to share them with friends and partners. we pioneered treatments reducing our fatality rate 85% since april. thanks to our efforts, three
4:47 am 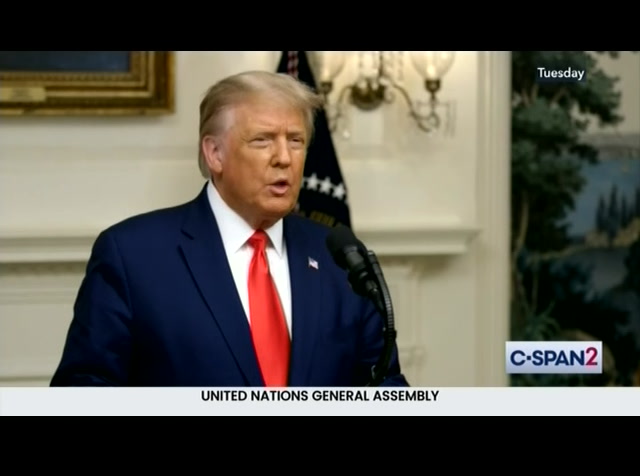 vaccines are in the final stage of clinical trials. we are mass producing them in advance so they can be delivered immediately upon arrival. we will distribute a vaccine. we will defeat the virus. we will end the pandemic. and we will enter a new era of unprecedented prosperity, cooperation and peace. as we pursue this bright future, we must hold accountable the nation which unleashed this plague onto the world, china. in the earliest days of the virus, china locked down travel domestically while allowing flights to leave china. and in fact the world. china condemned my travel ban on my country even as they canceled domestic flights and locked citizens in their homes. the chinese government and the world health organization, which is virtually controlled by china, falsely declared that there was no evidence of human-to-human transmission.
4:48 am 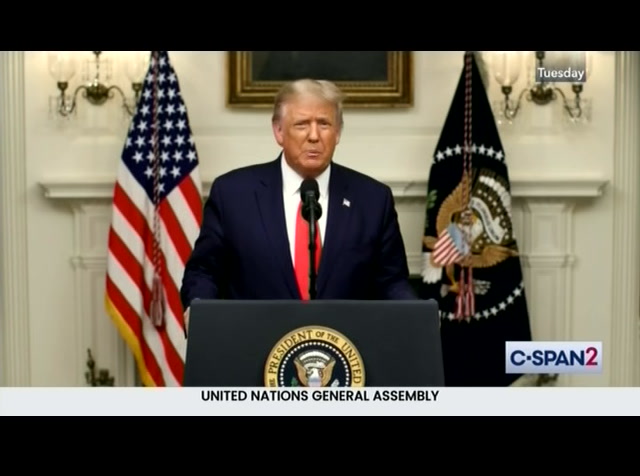 later they falsely said people without symptoms would not spread the disease. the united nations must hold china accountable. in addition every year, china dumps millions of tons of plastic and trash into the oceans. over fishes other country's waters, destroy vast swaths of coral reef and emit more toxic mercury into the atmosphere than any country anywhere in the world. china's carbon emissions are nearly twice what the u.s. has and is rising fast. by contrast, after i withdrew from the one-sided paris climate accord, last year america reduced its carbon emissions by more than any country in the agreement. those who attack america's exceptional environmental record while ignoring china's brandon pollution -- rampant pollution
4:49 am 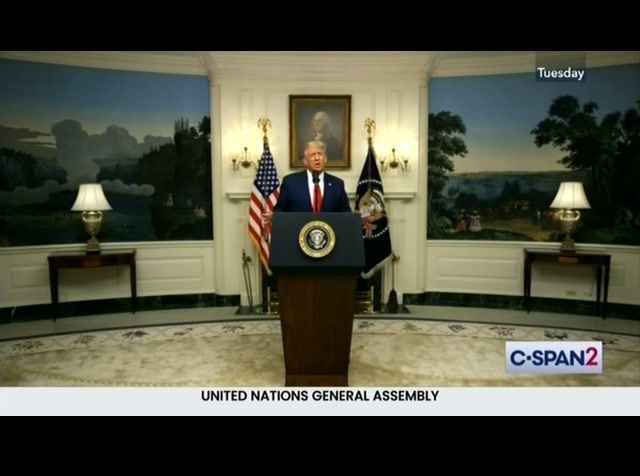 are not interested in the environment. they only want to punish america and i will not stand for it. if the united nations is to be an effective organization, it must focus on the real problems of the world. this includes terrorism, the oppression of women, forced labor, drug trafficking, human and sex trafficking, religious persecution and ethnic cleansing of religious minorities. america will always be a leader in human rights. my administration is advancing religious liberty, opportunity for women, the decriminalization of homosexuality, combatting human trafficking and protecting unborn children. we also know that american prosperity is the bedrock of freedom and security all over the world. in three short years we built the greatest economy in history and we are quickly doing it again. our military has increased substantially in size.
4:50 am 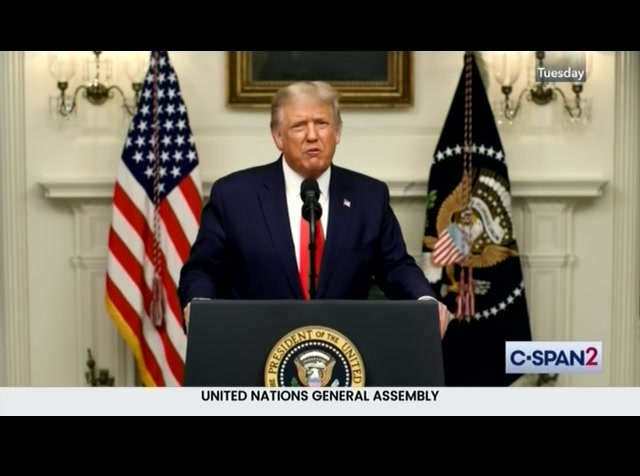 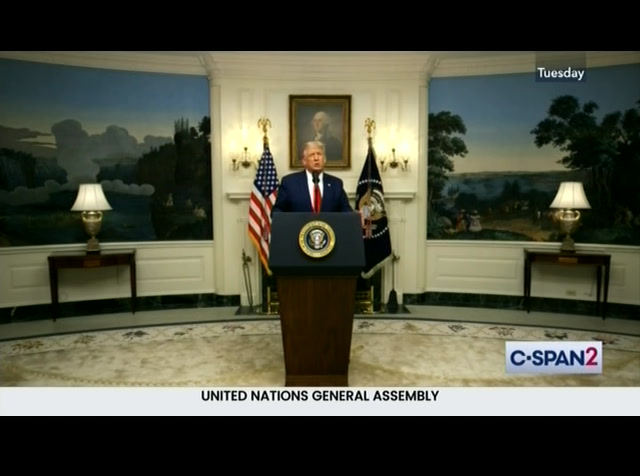 -- terrorist sal-ameni. we reached a landmark piece deal with countries in the middle east after decades of no progress. bahrain signed a historic peace agreement with many other middle eastern countries to, -- to come. it is great for them and for the world. these groundbreaking piece deals are the dawn of the new middle east. we have achieved different outcomes, far superior outcomes. we took an approach and the approach worked. we intend to deliver more peace agreements shortly and i have never been more optimistic for the future of the region. there is no blood in the sand. the united states is working to end the war in afghanistan and we are bringing our troops home. america is fulfilling our
4:52 am 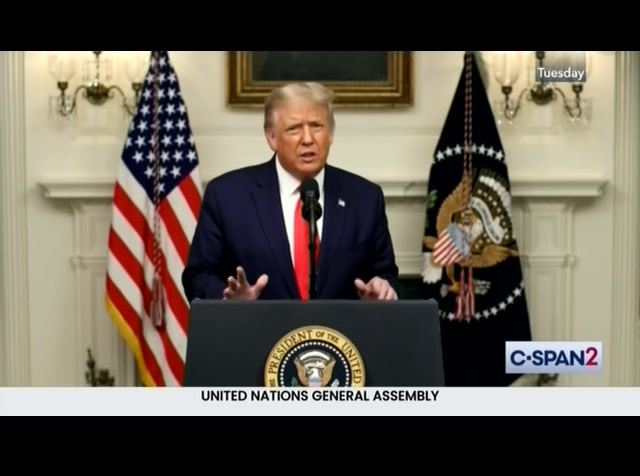 destiny as peacemaker, but it is peace through strength. we are stronger now than ever before. an advancedare at level like we have never had before, like we have never even thought of having. i pray to god we never have to use them. for decades, the same tired voices proposed the same tired solutions, pursuing global ambitions at the expense of their own people. only when you take care of your own citizens will you find a true basis of cooperation. as president i have rejected the failed approaches of the past and am proudly putting america first, just as you should be putting your country's first. . that's ok that's what you should be doing. i am confident that next year when we gather in person we will be in the midst of one of the greatest years of our history and, hopefully, the history of
4:53 am 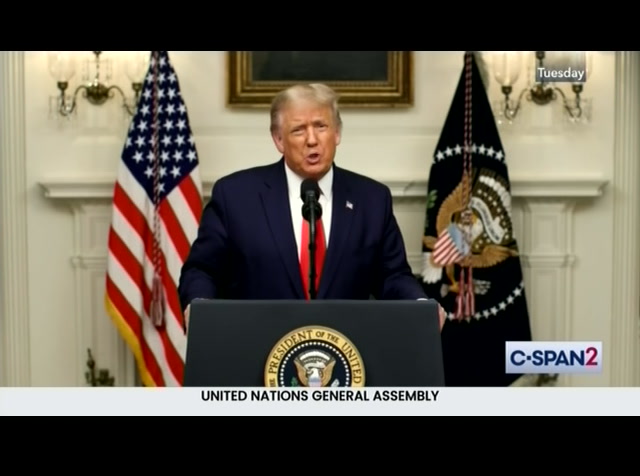 the world. thank you, god bless you all, god bless america, and god bless the united nations. [applause] >> on behalf of the general
4:54 am 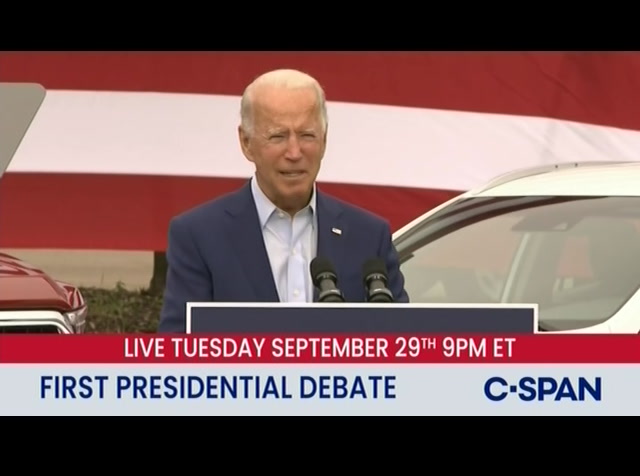 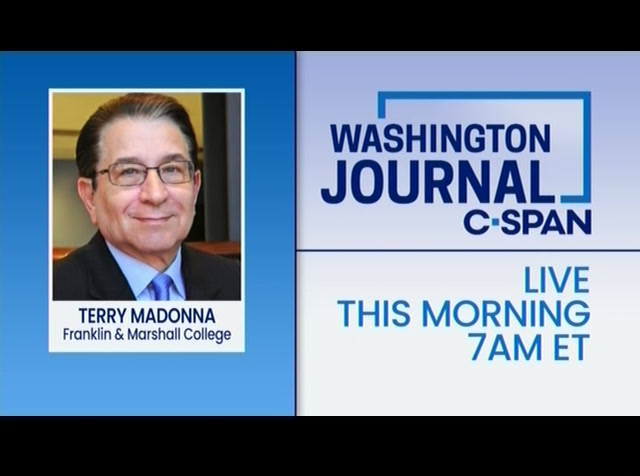 President Trump delivered pre-recorded remarks at the 75th session of United Nations General Assembly in New York City. He addressed the coronavirus pandemic, Iran and Middle East peace policy. On the coronavirus pandemic, the president stated, "The United Nations must hold China accountable for their actions." President Trump was introduced by U.S. Ambassador to the U.N. Kelly Craft.