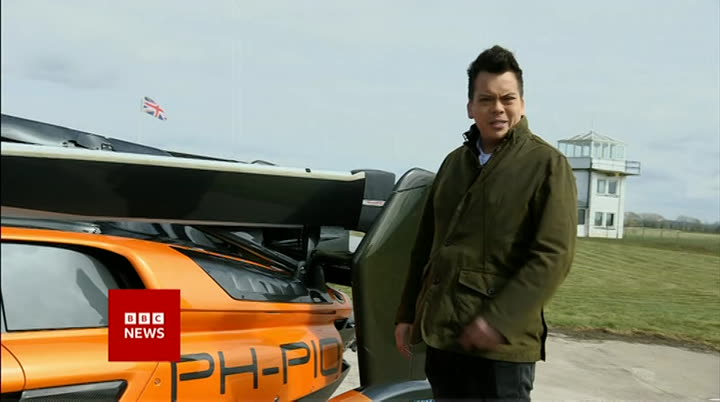 this is bbc news with the latest business headlines for viewers in the uk and around the world. how to tame inflation — the bank of england says a half a percent increase in interest rates is likely — will it work? the latest inflation data is out today. 1 million subscribers lost — that's the news from netflix as it announces a crackdown on password sharing. and we have the story of the danish meatless company that decided to base itself in the north of england.
5:31 am

so let's now get down to business and we begin with the bank of england and the warning that interest rates could go up by as much as half a percentage point at its next rates meeting. that's according to the bank's governor, andrew bailey. he was speaking to financial leaders in london last night and pledged to do whatever it takes to get inflation under control. we will have to act forcefully. in simple terms it means a 50 basis point increase will be among the choices on the table when we next meet. but it is not locked in. and anyone who predicts that we will do that is doing that based on their own view. we do not pronounce rate decisions for one very simple reason, and pc decisions
5:32 am 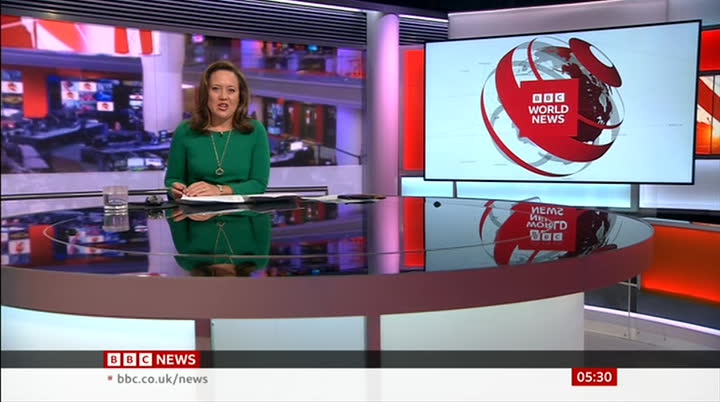 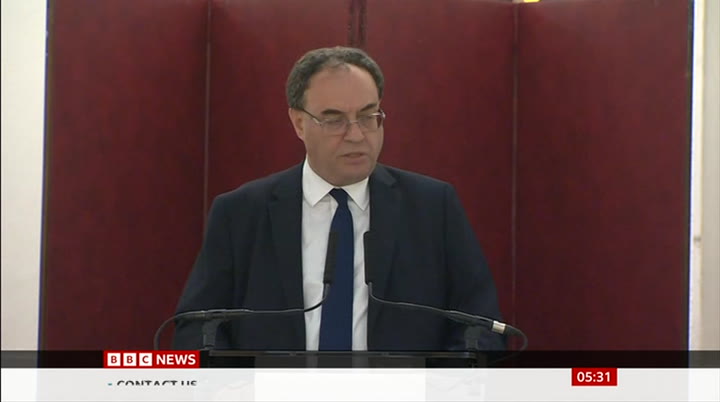 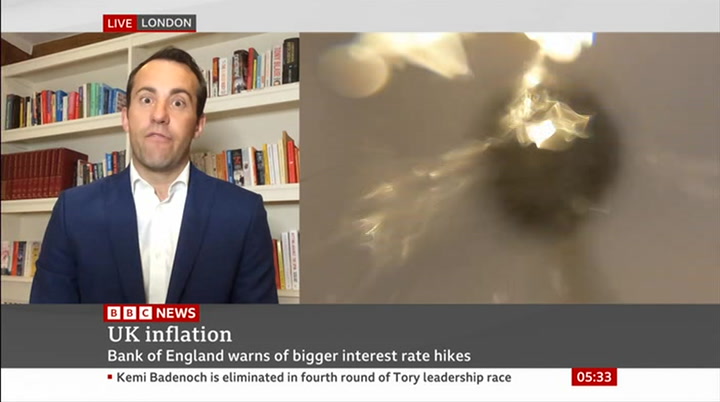 basis is more the role of the chancellor and that will be their focus whereas the inflation would have to be the bank of england will have to be myopic on dealing with thank but now let's the earnings season is well underway and netflix is the latest to tell wall street how its doing. the streaming giant revealed its lost nearly a million subscribers from april to june. that's fewer than the 2 million customers the company had warned investors it would lose. netflix said the strong us. dollar hit revenue, which grew 9% to us$7.97 billion below analyst estimates of $8.04 billion. so how is netflix doing, especially as the competition in the streaming industry heats up? harry mccracken is global technology editor at fast company
5:36 am 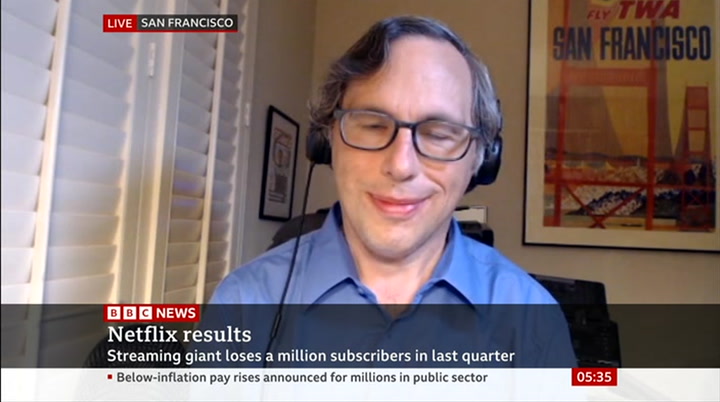 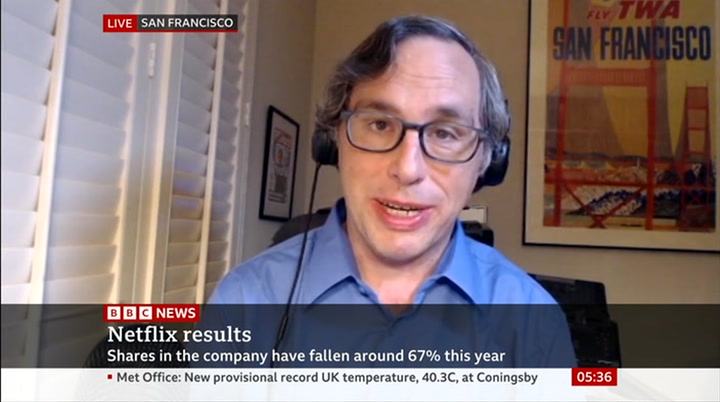 the battle between the world's richest man and social media firm twitter has reached new heights. a us court has set a date for twitter�*s lawsuit against elon musk, forcing the billionaire to follow through on his bid to buy the company. the decision is a blow to the tesla ceo who wanted the trial to start next year. our business correspondent in new york, samira hussain, has the details. in the hearing, lawyers the elon musk argued that the way twitter tracks fake accounts on the site is misleading. the social media company says roughly 5% of total monthly users are spam but elon musk believes the real number is actually much higher. in order to prove that in court, the billionaire and his lawyers said it would require many months to assemble the key witnesses and a tower, which is why they were requesting the trial begin in february of next year. but the lawyers for twitter said the uncertainty
5:40 am

over elon musk�*s takeover bid has been and continues to be detrimental to its shareholders and the company's business. ultimately, thejudge and the company's business. ultimately, the judge was persuaded in the battle between twitter and the world's richest man is set to begin in october and scheduled to last five days. after being paralysed during the covid lockdowns around the world, the global aviation industry is flying again but the recovery has been a turbulent one. airports have been heavily congested, airlines have had to cancel flights and aircraft manufacturers have had to cope with seemingly endless disruption to parts supplies, as they try to meet a new wave of demand for planes. among them is the european giant airbus, which has been touting its wares this week at the farnborough airshow near london. our business correspondent theo leggett is there and met with the airbus
5:41 am 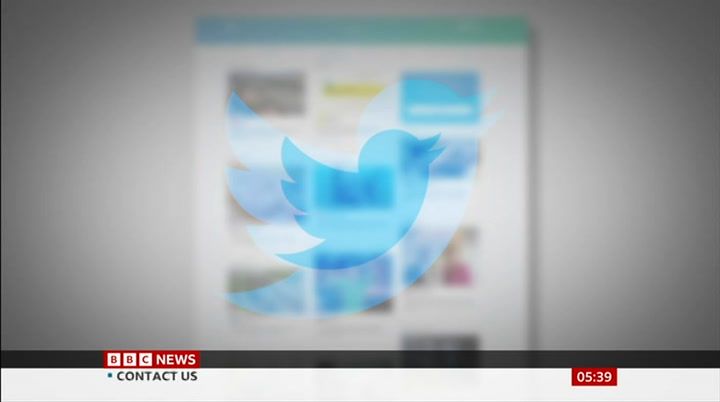 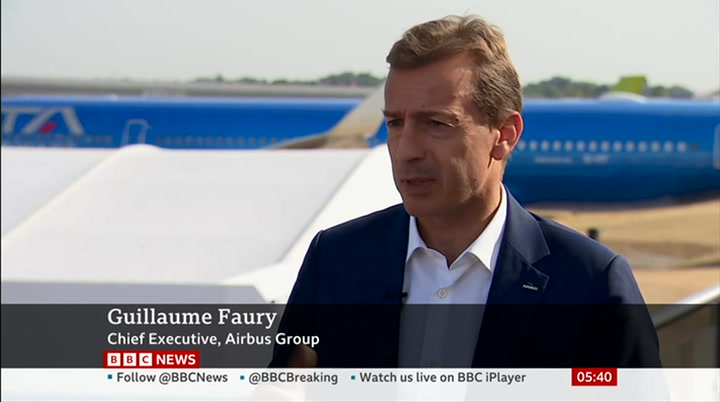 for the first crash - in the 30—year history of concorde, the world's only supersonic airliner. _ it was one of the most vivid symbols of the violence and hatred that tore apart the state of yugoslavia but now, a decade later, it's been painstakingly rebuilt and opens again today. there's been a 50% decrease in sperm quantity and an increase in malfunctioning sperm unable to swim properly. seven, six, five... thousands of households across the country are suspiciously quiet this lunchtime as children bury their noses in the final instalment of harry potter. this is bbc world news, the latest headlines: europe wakes up
5:45 am 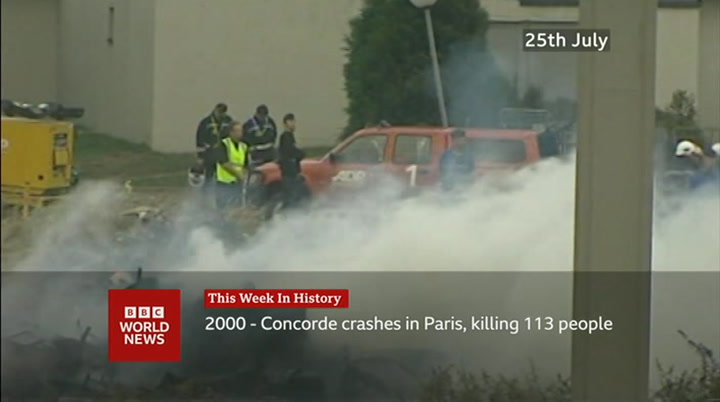 to more wildfires. blazes rage right across the continent, forcing thousands of people to flee their homes. in the us, 17 members of congress from the democratic party are arrested at a rally for abortion rights. it's another dramatic day for italian prime minister mario draghi whose resignation last week was rejected by the president. mr draghi, who has led a unity government for 17 months, will tell the senate in the morning whether or not he is prepared to stay in office. hours later there will be a vote of confidence in the government. mario draghi's populist coalition partner five star withdrew its support in a confidence vote last week, which prompted the prime minister to tender his resignation, triggering a political crisis in italy. fahad kamal is chief investment officer at kleinwort hambros in london. good morning to you. this is
5:46 am 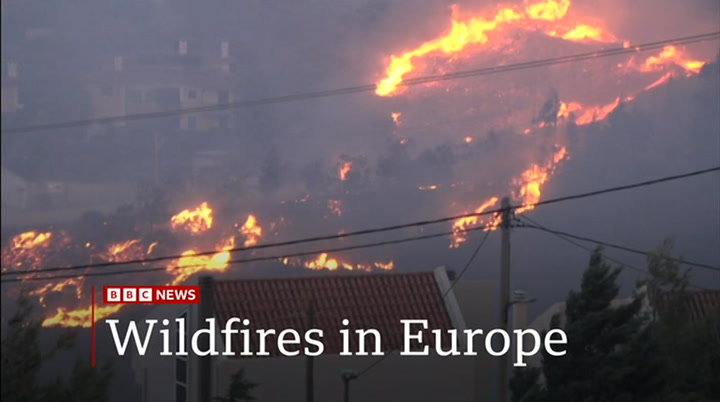 very critical, this situation in italy. the european central bank keeping an eye on it one of the most indebted country in the eurozone, looking at all sorts of challenges, some of which we are familiar with, cost of living, rising inflation, your thoughts on what might happen today? obviously don't know, it is a dramatic day as often happens, you would have heard from many sources, this is the 71st government in the last 75 or so years, so this is not unusual. so far the market don't seem to be too disturbed, the italian equity market is down 20% so similar to, equity market is down 20% so
5:47 am 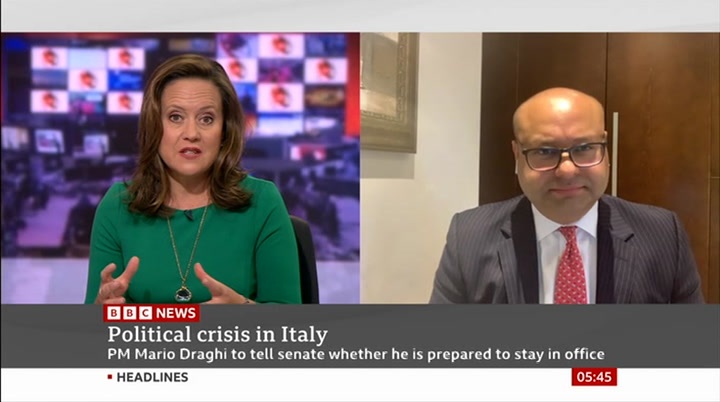 similarto, the equity market is down 20% so similar to, the spread over considered very safe above the long—term average i would say the. if the rally should is the reason that we have become used to political crisis in italy. leaders, governments go and come fairly regularly, is it different this time, many saw mario draghi as a very safe pair of hands given his background and effectively the european central bank for so long. if he were to go today if there was a vote of no—confidence in the government, where would he be? i think we would see a spike in the italian government bond yield no question about that, the equity market would be
5:48 am 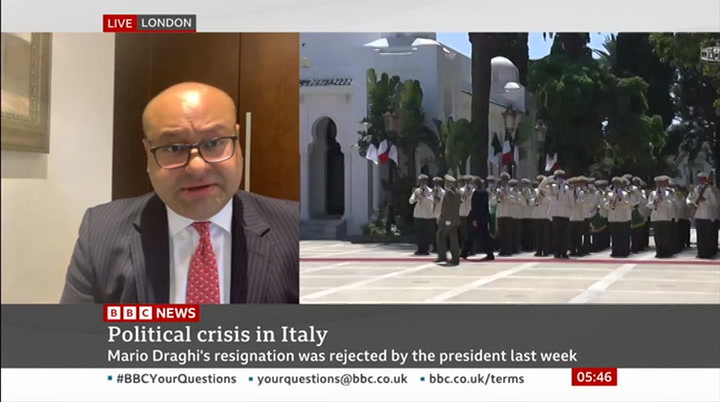 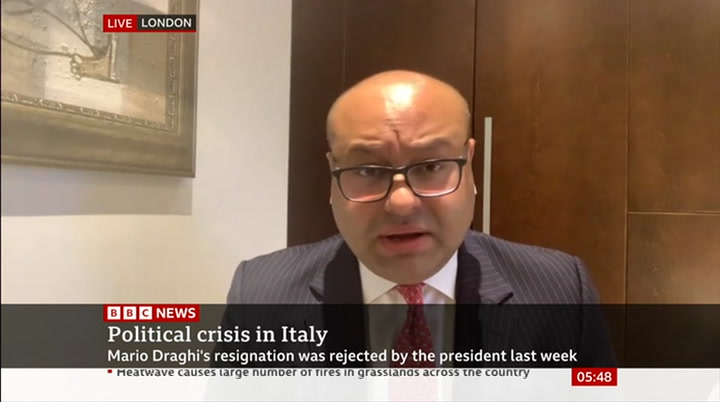 you base it? it's a fundamental question you need to get right — it could have a huge bearing on your future success. we've been hearing from one successful food entrepreneur who thinks some people make a common mistake when it comes to location. when you are setting up your own business don't be obsessed and setting it up in the capital of your country. when i set up the business i set it up and leaves on the north of england, and i do so because i looked at the prices in london, and it was very expensive to improve and looking at leaves, there is a huge area around lead with a
5:50 am 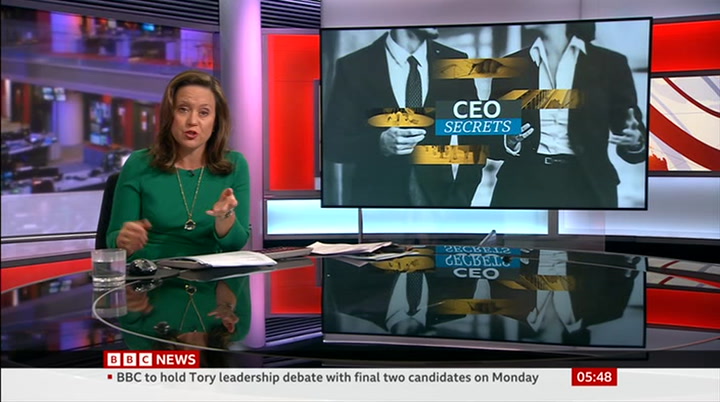 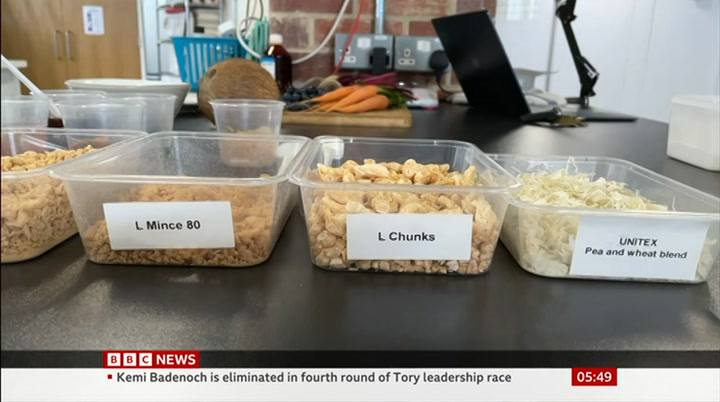 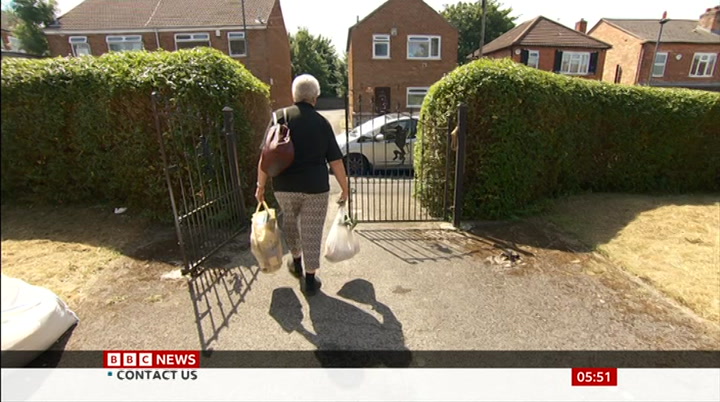 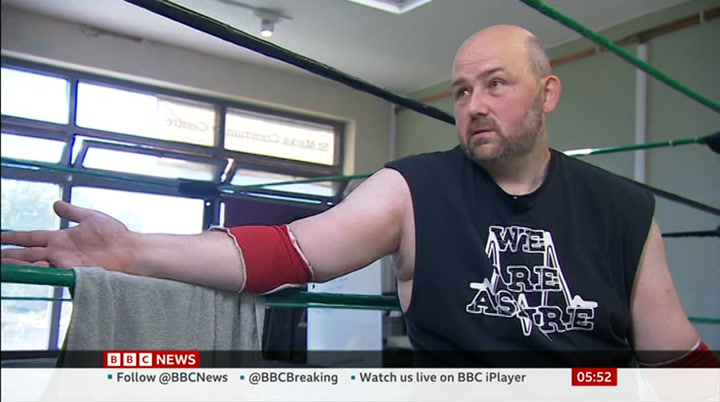 about the months ahead, autumn and winter, but someone in the uk, you have one 195 million, the euro millions jackpot. so that ticketholder you need to check because maybe you can help out. we have tony duffy i did ask earlier in the programme on twitter what would you do at —— with the money? he has been in touch, he said i would probably give most of it away. please get in touch we need it. paul prompt and said he would take me out to dinner. come on folks, you must be more thoughts out there in terms of what you might do with 195 million. i want to hear, i met sally bund, c, on twitter. financial markets are uppity, strong gains in asia, wall street with the earnings season
5:55 am 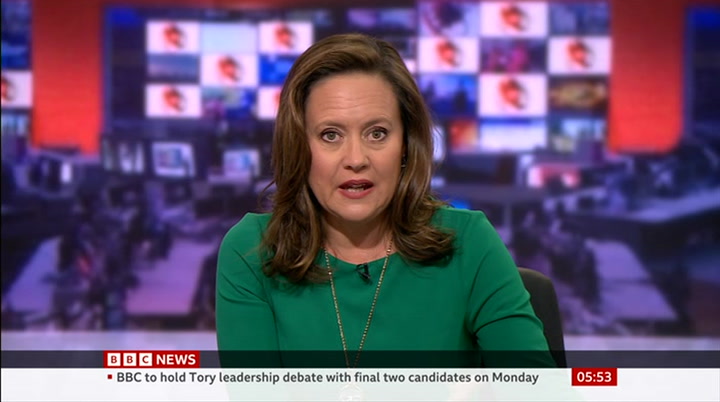 under way, street with the earnings season underway, investors street with the earnings season under way, investors are pleased so far with what they are hearing from most companies reporting. you are up to date, i'll see you soon, have a good day. hello. our historic and unprecedented heatwave is now coming to an end, but on tuesday, we recorded a new provisional uk record of 40.3 celsius. normally when we break records, it's by a fraction of a degree, but that's the old record. we've exceeded it by more than 1.5 degrees. this is very significant. eastern parts of the uk start wednesday, still in the grip of some relatively warm air, but out towards the west, something cooler and fresher flowing in from the atlantic. so, waking up to another warm start across eastern parts of england, but with some spells of sunshine. out towards the west, wales, the southwest seeing some cloud and some showers, the odd heavy one. those showers drifting eastwards through the day. quite a lot of cloud for eastern scotland, more brightness
5:56 am

further north and west. sunny spells and just the odd shower there for northern ireland. temperatures lower than they have been. still 29 in the east of england — normally we consider that hot, but obviously not as hot as it has been — more like 18—20 for a good part of scotland and northern ireland. now, through the late afternoon and evening, we will see some quite intense thunderstorms across parts of northeast england, the midlands, east anglia, maybe the southeast — quite hit and miss, but some places could get quite a lot of rain in a short time. a lot of cloud holding on across eastern areas, more clear spells out towards the west, but it will be cooler and fresher for all of us as we start thursday morning. now, the next thing i think many of us would really like is some rain, but with high pressure building in for thursday, we're not going to see very much of that. yes, there mayjust be the odd shower here and there, a lot of cloud across central and eastern parts of england. that could produce the odd spot of rain, but for most, it is looking like a dry day. some spells of sunshine, particularly out towards the west. temperatures, though, much lower than they have been
5:57 am 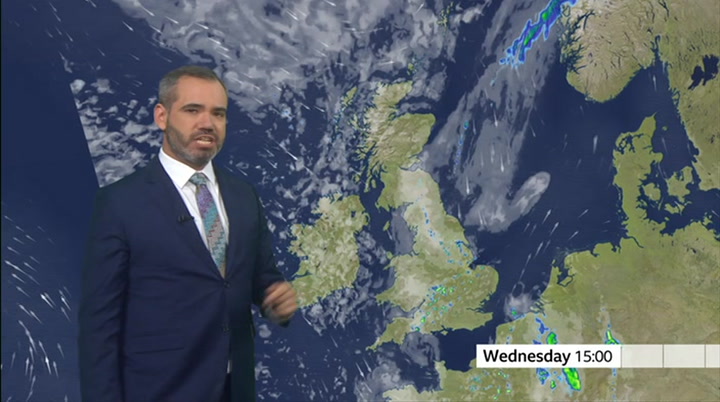 at 17—25 celsius north to south. friday, we stick with that cooler feel. a greater chance of seeing showers on friday, but they certainly won't crop up everywhere. they will be quite hit and miss. some will be heavy, some will be thundery. best chance of brightness, i think, across southern and southwestern parts, but temperatures much closer to where they should be, actually, for the time of year, 15—23 celsius. as we head into the weekend, the best chance of seeing some rain will be up towards the north and the west of the uk. further south and east, it should stay dry with some spells of sunshine and it will actually start to turn a bit warmer once again.
5:58 am 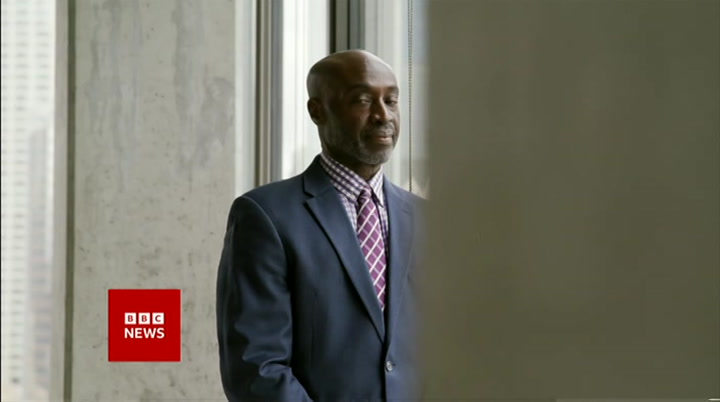 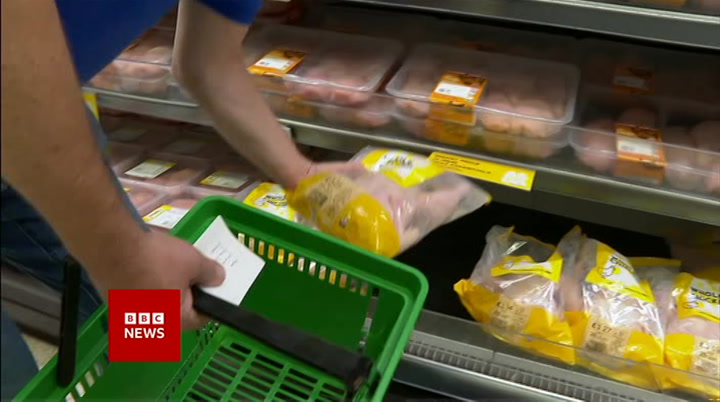 the final countdown. conservative mps vote on which two candidates will go through to fight
left
right
Borrow Program
tv

The latest business news with informed analysis from the world's financial centres.